Introduction about the Shore Temple

The Shore temple is located on the shore of the Bay of the Bengal in Mahabalipuram, a village town in the Southern Indian State of Tamil Nadu. The town is today called Mammalapuram and situated around 58 km south of Chennai. Hailed as one of the oldest structural stone temples in the world, it was classified as a UNESCO World Heritage Site in 1984. The temple is one of a cluster of ancient monuments which have withstood the ravages of time and still exist in Mammalapuram. It is one of the seven Pagodas that initially existed, of which six temples are submerged in the sea. Currently, the site is under the aegis of the Archaeological Survey of India, who is taking steps to conserve and protect the temple. The vicinity of the temple has been beautified by the horticultural society, and a lush green lawn welcomes visitors. This magnificent temple is one of the most prominent tourist attractions of India and enjoys the patronage of hundreds of thousands of visitors.

History of the Shore Temple 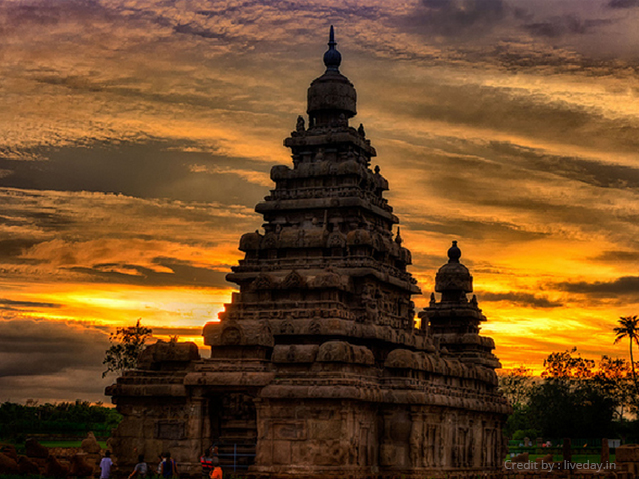 The creation of this structural masterpiece is credited to the King Narasimha Varman II of the Pallava Dynasty who was popularly called as Mamallan. Sometime in the mid-7th century he initiated construction work on the Cave temples and the imposing monolithic Rathas. Work on sculpting the cut-in and cut-out structures continued during subsequent periods during the reign of several South Indian kings. The Chola kings also continued to work on the temple and their involvement in the construction of the temple is evident from the style and design of some structures.

Legend of the Shore temple

According to Hindu mythology, a mighty king named Hiranyakasipu refused to worship Lord Vishnu, but his son Prahalad was an ardent devotee of the Lord. He refused to obey his father’s diktats and was banished from the kingdom. Upon returning, he was confronted by his father who dared him to prove the existence of Vishnu. Prahalad duly informed him that Vishnu is present everywhere in all animate and inanimate objects. Hiranyakasipu then challenged him to make Vishnu appear out of a pillar and kicked it, whereupon a fierce Avatar of Vishnu in the form of a Man-Lion (Narasimha) emerged. This fearsome form of the Lord effortlessly carried the king to the threshold and killed him. Prahalad ascended the throne with the blessings of Narasimha and had an illustrious grandson named Bali, who was renowned for his generosity but a little vain. The town was named Mahabalipuram to commemorate Bali’s sacrifice to Lord Vishnu in his Avatar as a Dwarf (Vamana).

Significance of the Shore Temple

The majestic Shore temple is also referred to as the Seven Pagodas and unfortunately most of the structures are submerged. The structure which has survived the onslaught of the waters is a complex of three temples, one large and two small. This structure once served as landmark for navigation of ships by ancient seafarers, who termed it as the Seven Pagodas.

Architecture of the Shore Temple

The Shore temples are built in the same architectural style, with the main temple facing east, ensuring the first rays of the Sun shine on the Shivlingam within the shrine. It is a massive five-storied structural shrine replete with sculpted granite rocks. It also holds the distinction of being one of the oldest structural temples in South India. The pyramidal structure is around 60 feet high and rests on a 50 foot square platform. The circular shikara is erected on a circular griva and built in the Versara style of architecture. A spire in the shrine is spectacularly embellished with several sculptures and carvings. The small temple in front is made of finely cut local granite and served as the original porch. This and the main shrine are dedicated to Lord Shiva. One shrine is dedicated to Lord Vishnu who is depicted in a reclining posture. All the shrines have intricate carve sculptures and topped by large sculptures of Nandi. The location of the temple on the very margin of the sea where it is exposed to many dangers indicates the sheer gumption of the builders and the capabilities of their craftsmanship.

A gala dance festival is held every year in Mammalapuram during Dec-Jan. It is organized by the Department of Tourism, courtesy of the Government of Tamil Nadu. This month long extravaganza features exponents of various traditional dance forms of India. It is held against the backdrop of the spectacular Pallava rock sculptures and features Bharatanatyam, Kuchipudi, Kathak, Odissi, Mohini Attam and Kathakali dance performances. The festival is a huge draw and attracts massive crowds from all over the world.

Location – How to reach the Shore Temple

Mahabalipuram or Mammalapuram is around 58 km away from the city of https://www.astroved.com/remedies/astrologer-in-chennai. It is frequented by visitors throughout the year and numerous resorts have sprung up on the road leading to the town. The town itself has several hotels, resorts and lodges who offer accommodation to suit all budgets. It is a thriving tourist center and easily accessible by several modes of transport.

By Air: The Chennai Airport is located around 48 km away.

By Train: The nearest Railway Station is in Chengalpattu, around 24 km away.

By Bus: Mammalapuram is well connected by bus service.