Nandi the vahana of lord shiva 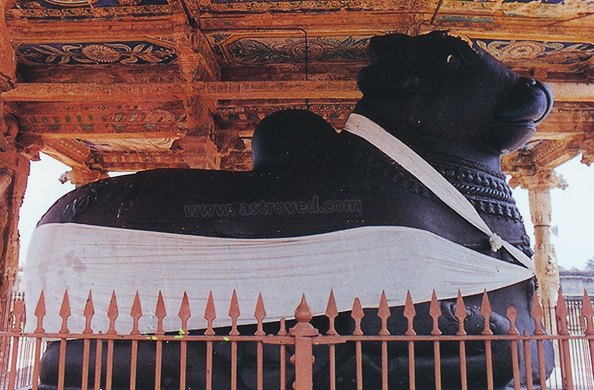 Nandi is the sacred bull, who serves as the vehicle or mount of Lord Shiva, the God of destruction. He also remains as one of the main Shiva Ganas, the divine attendants of the Lord and also the principal guardian of Kailash, the mountainous abode of Shiva. He holds an exalted status in the religious domain and is referred to with respect as Nandi Deva or Nandikeshvara.

Nandi is generally depicted as a great-seated bull, with all its limbs folded and facing Lord Shiva. He is white or black and wears a necklace made of bells. He is also shown elsewhere as part-human and part-bull, adorned with a beautiful dress, ornaments, and garlands, holding a conch, a deer and a staff in his hands and also as blessing the devotees.

The name ‘Nandi’ seems to have different origins. The word in Sanskrit means ‘happiness’ or ‘joy,’ which are considered to be the qualities of Nandi Dev. The Tamil word ‘Nandhu’ means ‘to go’ or ‘to flourish,’ and is said to denote Nandi’s flourishing as a divine bull. Nandi’s greatness lies not only in his role of being the mount of the Lord and the guardian of his place of living but also in him being a great preceptor. The ancient tradition of Shiva worship regards Nandi as an important Guru, the chief of the Lord’s eight famous disciples, who went in the eight directions to spread Shaivite wisdom.

Mythology describes Nandi as the son of Sage Shilada, who did an extremely severe penance for begetting a son who is virtuous, immortal and devoted to Shiva. And Nandi emerged out of the sage’s sacrificial fire, as his son. At birth, his physique was said to have been covered with diamond armor. Nandi grew up as a staunch devotee of Shiva, did severe penance towards him and obtained the privilege of being his guard and also his mount. Nandi, then, got the wisdom on the Agamas and Tantras (sacred texts and principles) from Goddess Parvati, which was taught to her by Shiva himself.

There are quite a few Puranic stories concerning Nandi. His encounter with Ravana is famous among them. Once, Ravana visited Kailash to worship Shiva. On seeing Nandi just outside, the arrogant demon made fun of him calling him a monkey. The angry Nandi cursed Ravana that his kingdom would suffer destruction at the hands of a monkey. It came true, when Hanuman burnt down Lanka, when he went there in search of Sita Devi and thus, contributed to his ultimate downfall.

There is also a story about Nandi declaring Shiva (the real loser of the game) as the winner in a dice game he played with Parvati. The upset Goddess cursed Nandi, who lied to her to suffer from an incurable disease, and later, on him explaining and seeking her mercy, relented and advised him to worship Ganesha. Nandi prayed to him on the Chaturdashi (14th lunar phase) day in Bhadrapada month and got freed from the curse.

As per another story stated in the Thiruvilayadal Purana, Parvati lost her concentration momentarily, when Shiva was explaining the sacred Vedas to her. Parvati took birth on Earth as a fisherwoman to atone for her mistake. Nandi, determined to unite the divine couple, incarnated as a big whale and played havoc near the place where Parvati lived. Then, her father, the chief of the fishermen, declared that he would give his daughter in marriage to the one who killed the whale, and Lord Shiva came as a fisherman, ‘killed’ the Nandi-whale and reunited with Parvati. Thus, Nandi served his divine masters with devotion and faith.

Nandi occupies a prime position right in front of the Shiva Lingam, in almost all the Shiva temples and is worshipped along with the Lord. Also, Shiva is said to dance between the horns of Nandi at the sacred Pradhosham times, when special worships are offered to him. Maha Nandiswaraswamy temple in Andhra Pradesh is dedicated to this bull-mount, where the world’s biggest Nandi statue is worshipped. Nandi is regarded as a symbol of purity, justice, wisdom, and power and his worship can fulfill the true wishes of the devotees.

Nandi worship assumes prominence on the occasion of Pradosham, which is observed during the twilight hours of Triyodashi, the 13th lunar day, when Abishekams (hydration ceremonies) are performed in the temples to both, Nandi and Shiva and special worships are offered to them.