The Siva Subramanya Swami temple is one of the most famous Murugan temples in Chennai. The temple lies 2 kilometers away from the Saidapet Railway Station. It is located near Karaneeswarar temple.

Murugan, the son of Shiva and Parvati, is a much loved and revered God, especially across South India. He is known by various names, including Subramanya, Shanmukha, Skanda, Arumugam, and Kumaraswamy. Most of his temples are in hilly regions called Kurinji in Tamil. He is the Hindu God of War and has defeated many evil Asuras (demons) to protect the Devas. Defining youth, beauty, intelligence, and courage, he is a God with special powers. When worshipped with deep faith and devotion, he showers blessings in abundance on his suffering devotees and removes all obstacles and troubles from their lives.

It is said that the temple was built by people belonging to the Sengunthar community. The people of this community are managing the temple. The temple is also called Senguntha Thottam. The temple started with a shrine only for Murugan and later rose in size and fame. The temple was established when Murugan had won Deivanai in war and Valli in love. 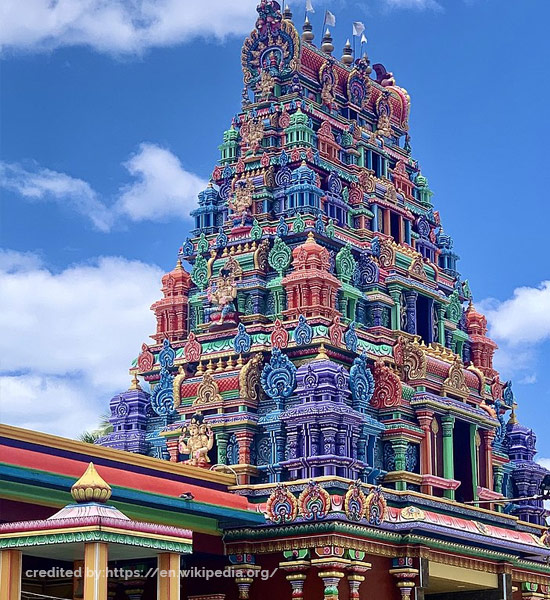 The story goes that around one hundred years ago, a thief entered the temple premises and placed his hands on the idol to take away the jewels. As soon as his hands touched the idol, he lost his eyesight and cried out loud. People rushed to the temple and realized what had taken place. However, they did not punish the thief as he had already been punished by God himself. News of the incident was shared, and the power and fame of the deity spread far and wide. People gained tremendous belief, and many devotees started thronging the temple. This temple sees huge crowds even today.

The main deity of the temple is Murugan with his two consorts, Valli and Deivanai.

The temple has two towers that can be seen from the road- the big tower for the main temple and the smaller tower for Ganesha's shrine. Ganesha is known as Senguntha Ganapati. The left side of the temple houses small shrines of saints, including that of Ramalingar, Kumaragurudasa Swamigal, and Chidambara Swamigal.

There are small shrines for Ayappa, Idumban, Kadamban, Surya, Palani, and Arunagirinathar. A separate shrine for Angaragan (Mars) is seen within the premises. The walls are covered with beautiful murals in intricate designs.

Inside the main sanctum is the presiding deity of Siva Subramanya. This form of Murugan is seen in a standing posture with both his consorts- Valli and Deivanai. At the entrance of the sanctum are images of Ganesha and Murugan on either side. An elephant idol stands in front of Murugan's sanctum. There is the idol of a peacock in front of the main shrine.

The wall that surrounds the sanctum has idols of Ganesha, Skanda Guru, Murugan, Vishnu, Chandikeshwara, and Durga. The inner prakaram (small corridor) inside the main shrine also houses the shrines of the Utsav (metal) idols of Nataraj and Sivakami, Singaravelan, Shanmukha, along with Valli and Deivanai. Other idols include Nalvar, Pradosha Nayagar, and Arunagiri.

The inner prakaram (small corridor) also houses two separate shrines for Nalvar, Ganesha, Valli, and Deivanai. The outer prakaram (big corridor) has idols and shrines for numerous Gods and https://www.astroved.com/astropedia/en/goddess/ that include Shaneeshwara, Hanuman, the three Supreme Goddesses Lakshmi, Saraswathi and Parvati, Nagaraja and the Navagrahas.

There is a separate shrine for Kasi Vishwanathar and Vishalakshi. Vishwanathar is in the form of a Shiva Lingam. The idols of Shiva and Parvati are found behind the Shiva Lingam . A small prakaram (corridor) surrounds the Vishwanathar shrine that also has idols of Ganesha, Dakshinamoorthy, Vishnu, Brahma , Durga, and Chandikeshwara.

There is another shrine dedicated to Shanmukha (six-faced Murugan) and his consorts- Valli and Devanai. The prakaram (corridor) surrounding the shrine has small idols of Ganesha, Murugan, Skanda Guru, Vishnu , Durga, and Chandikeshwara.

The temple is believed to be over 400 years old and is one of the most famous temples for Murugan in the city. Devotees flock to the temple and have immense faith in the power of the presiding deity. People often pray and make offerings to God for helping them overcome disputes over house and property, and disputes within family members. They pray to the deity to remove obstacles in their path regarding marriage proposals.

Siva Subramanya Swami is all-merciful and blesses his devotees, granting them their wishes. The devotees in gratitude offer salt and pepper and feed the poor and underprivileged people on Tuesdays and Fridays . They also offer Vastras (clothes) in red to the fiery planet Mars, ruled by Murugan.

The temple celebrates the festivals of Panguni Uthiram in March, the Chithirai Tamil New Year Day, the Thirukarthikai that falls in November-December, the Karthikai star days in the month of Thai (January-February), and Aadi in the months of July-August.

Local trains are also available, and the Saidapet Railway Station is just 2 kilometers away from the temple.

The temple is within the city of Chennai and can be accessed by public and private transport.