Hanuman plays a significant role in the Hindu epic Ramayana as a staunch devotee of Lord Rama. He is revered for his immense strength and courage as mentioned in the Great Epic, Mahabharata, various Puranas, and some Jain texts. Lord Rama relied on his fearlessness and prowess to wage war on the Demon King Ravana. His miraculous power to traverse the ocean enabled Him to convey the message of Lord Rama to his consort Sita.

Hanuman, endowed with the face of a monkey and embodies strength, intelligence and wisdom. He is widely revered for his devotion to Lord Rama and His resolve to remain a Brahmachari (celibate) indicates his mastery of the senses, inspiring people to conquer their base instincts. Well versed in the Vedas and an erudite scholar, He always responds to the call of his Devotees. Hanuman is believed to be one of the four people to have heard the Bhagwad Gita from Krishna and bessed with the Dharshan of Lord Vishnu in his universal form (Vishvarupa).

Incarnations of the deity (important to stress His deeds)

Hanuman is considered to be the brother of Bhima who possessed immense strength and played an instrumental role in the epic Mahabharata. Hanuman is also blessed with the innate qualities of Rudra and widely perceived to be an incarnation of Lord Shiva. Hanuman is also known as Maruti and In the Mahabharat He is referred to as Marutatmaja. 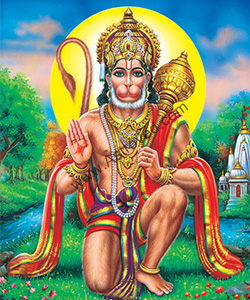 Hanuman is the son of Anjana and Kesari and also described as the son of the Wind-God Pawan (Vayu). Hanuman and the Vanaras ( Monkey Race) play a pivotal role in the epic Ramayana to bring about the reunion of Rama with Sita. When Lakshman is injured on the battlefield, Hanuman leaped toward the Himalayas in search of the Sanjivani herb and eventually brings back the entire mountain.

Devotees reverently chant the Hanuman Chalisa to impress Him and get their desires fulfilled. Offerings of Sindoor, Jasmine oil laddoo and a red flag to Hanuman are also said to bring about his Divine grace. Devotees in Divine fervour chant Jai Bajrangbali to connect with the Monkey God.

Lord Hanuman alleviates the sufferings of his devotees and removes obstacles in their everyday life. His ardent devotion to Lord Rama empowers Him with the power to bless and bestow prosperity on his devotees. Venerating Him as Sankat Mochan( Reliever of sufferings) brings immense benefits to His Devotees and instills in them the courage to lead a trouble free life. Brahmacharis (celibate) youth are said to please the Lord immensely and they enjoy especial status as his devotees. Praying to Lord Hanuman on Tuesday and Saturday is also considered to be auspicious .

This Fire Lab invokes Hanuman as chief archetype. It is conducted by a fully qualified Vedic specialist. According to Dr. Pillai, “Hanuman, who is the Monkey-God