Lord Dakshinamurthy is a powerful Avatar of the Hindu God Shiva, who appears as a Guru (teacher) to guide one on the right path. This divine form of Lord Shiva is the personification of all types of knowledge and symbolizes awareness, understanding and wisdom. He is also revered as a teacher of the arts like yoga, music, meditation and various other artistic abilities. Shiva is considered as the master of the Shastras and his expositions of these texts are unparalleled. In Hindu philosophy, having a Guru is all important and those who do not have one are advised to consider Lord Dakshinamurthy as their teacher.

In Hindusim, the south is regarded as the direction of death, which subtly implies the demise of the old making way for the new. Hence, the south is regarded as Shiva’s domain since he is responsible for the destruction of the old. Dakshinamurthy means south facing and in every Shiva temple the image of Lord Dakshinamurthy faces the south. Facing the south is unique to Lord Shiva and everyone considers Dakshina as efficient and learned. This moniker attached to Lord Shiva is mostly South Indian in character and many in these regions name their progeny ‘Dakshinamurthy’ in honor of the deity.

The Avatar of Lord Shiva as Jnana Dakshinamurthy is generally depicted with four arms and seated under a banyan tree facing the south. He is shown seated upon a deer-skin with several sages listening in rapt attention to his teachings. His right foot is placed on the mythical demon of ignorance ‘Apasmara’ and his left foot is folded on his lap. One of his upper arms wields a snake or rosary and the other holds a flame. His lower right hand is shown in the Vyakhyanamudra posture and the lower left is shown grasping a bundle of kusha grass which represents the Holy Scriptures. His fingers symbolize the ‘Gnana Mudra’ pertaining to knowledge and wisdom. Lord Dakshinamurthy is always immersed in a deep yogic state of meditation and represents the potent force of ever flowing bliss indicative of supreme joy. Several seers portray him as the absolute hidden power inherent in all enlightened ‘Gurus’ or teachers.

In keeping with the Indian tradition of holding the teacher in the highest esteem, Lord Dakshinamurthy embodies all the aspects of emulation and reverence. He is the ultimate Guru or teacher in Hindu culture, as the propagator of knowledge and dispeller of ignorance. His limbs and body denote various aspects of the enlightened man and signify his willingness to impart knowledge to whoever seeks him out. 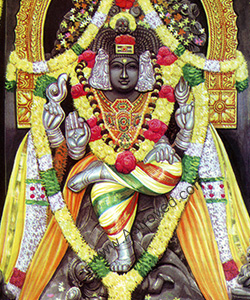 Thursday is known as ‘Guruvar’ and generally associated with the Planet Jupiter. This day is dedicated to Guru Worship and considered auspicious to indulge in educational activities. Special worship services are offered to Lord Dakshinamurthy on Thursday in Saivite temples and more so, on Guru Purnima.

The idol of Lord Dakshinamurthy is installed in every Shiva temple and of late, several temples dedicated to the deity have been built.

The Mahakaleshwar Dakshinamurthy Jjyotirlinga in Ujjain is an important Shaivite center of learning. The 112 feet south-facing Adiyogi Shiva statue at the Isha Yoga Center in Coimbatore is a recently built Dakshinamurty temple.

Aisde from these, there are several prominent Dakshinamurthy temples in Kerala, Tamilnadu and Andhra Pradesh. Even the Island nation of Mauritius has a temple of the deity. Temples dedicated to Lord Dakshinamurthy are prevalent even in the United States of America.

There are several Hymns and Mantras dedicated to Lord Dakshinamurthy and people pray to him for protection, overall well-being and success in the Academic sphere.

Samhara Dakshinamurthy is a very powerful aspect of Shiva, who is widely regarded as the Guru – teacher of all forms of knowledge.