About the Pattadakal Temples

Pattadakal is a village located in the Southern state of Karnataka, India. It is home to a slew of Hindu Shaivite & Jain Temples and recognized as a UNESCO World Heritage site. The temples in this world renowned village are striking pieces of architecture dating back to the 7th and 8th century. The village is located on the left bank of the Malaprabha River in Bagalakote, in the close vicinity of the towns of Badami and Aihole, both well known for the ancient Chalukya monuments which abound there in proliferation. The historical and archaeological site Bachinagudda, dating back to the pre-Chalukya era is also near Pattadakal.

History of the Pattadakal Temples 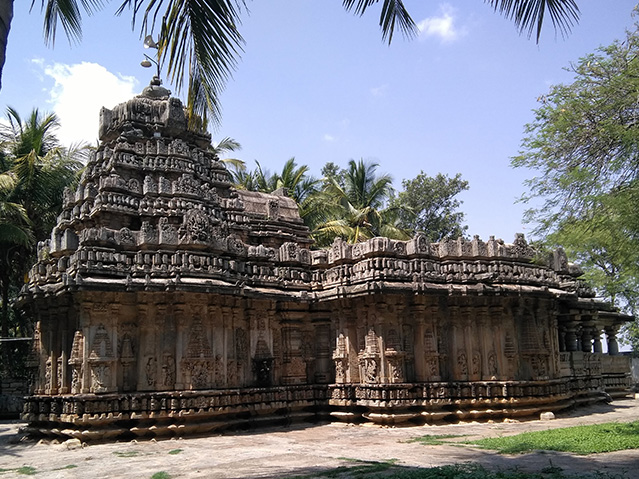 The historical town of Pattadakal is where the Badami Chalukya kings were crowned, since it was considered as a holy place. The Chalukyas were the dominant dynasty of Karnataka between the 6th and 8th centuries and built scores of temples during this period. Ten prominent Hindu and Jain temples exist in Pattadakal, which are again surrounded by myriad small shrines and plinths built in a fusion of North Indian and South Indian style of architecture prevalent in those days.

These shrines establish the existence of the various religious sects that thrived in the area during that period. Four temples are built in the South Indian Dravida style, four in the North Indian Nagara style and the Papanatha temple is an amalgamation of both. A total of nine Shiva temples and a Jain Narayana temple dating back to the 9th century are situated along the northern course of a River. Several of the temples were built to commemorate special occasions and designed along the lines of other famous temples.

The magnificent Jain Narayana temple was built by the Rashtrakutas of Manyakheta in the Dravidian style. Several exquisite sculptures dating back to the 9th century are found in the temple premises. The primary deity in the Sanctum Sanctorum is Parshvanatha, the 23rd tirthankara of Jainism. The temple has a main hall, and several other structures. The walls of the upper portion are arranged in a unique pattern in alignment with the lower portion. Extensive excavation at the site by the Archaeological Survey of India has revealed the existence of a large brick built temple and also uncovered a charming sculpture of Tirthankara in a standing posture, dating back to possibly the early Chalukyan era. This temple is on the Pattadakal-Badami Road and visitors are awe-struck by the breathtaking beauty of the shrine.

This is probably the largest and most opulent temple constructed in Pattadakkal during the 8th century. It was built by queen Lokamahadevi to celebrate her husband’s victory over the Pallavas of Kanchi. The shrine houses some extraordinary sculptures of various Hindu deities. It is surrounded by a large Prakara and houses a Sanctum, an inner passage, pillared Navagraha and several entrances. A massive gateway welcomes visitors in the front and a small gate is located at the back. Several inscriptions and stone carved figures are housed inside the Mantapa and a four pillared Nandimantapa which houses a large stone bull. A beautiful black Shivlinga is installed in a square pedestal in the Sanctum. The Virupaksha temple is modeled on the same design as the Kailasa temple at Kanchi and the famous Kailasa temple in Ellora was inspired by this very same model.

The Sangameshwara temple was built by the Chalukyas at the turn of the 7th and 8th century and is the oldest in Pattadakal. It is built in the Dravidian style and has a Sanctum, an inner passage and Navaranga. Several sculptures of various figures adorn the outer walls and the Vimana is three storeys tall. The temple shares several similar design features with the Virupaksha temple. This three storey temple has a Navagraha with 20 pillars arranged in four rows and a Dravidian styled tower in the Sanctum. This temple was built by the early Chalukya kings and dates back to almost 1,400 years.

Located to the left of the Sangameshwara temple is the small Chandrashekhara temple. Of very simple architectural style, this shrine consists of a small hall and a Sanctum in which a Shivalinga is installed.

The Mallikarjuna temple was built in 745 A.D and is a smaller version of the Virupaksha temple. It is built in the Dravidian style of architecture and similar to the Sanghameswara temple in style, design and construction. On the porch are situated two female idols and a charming image of Lord Narasimha killing Hiranyakashipu. Both sides of the entrance to the Navagraha are flanked by two imposing images of deities. The pillars of the Navagraha number eighteen in all and depict scenes from the Ramayana and Mahabharata, recounting the conditions prevailing in those periods. The ceiling depicts exquisite images of Gajalakshmi and Shiva-Parvathi with Nandi. The external walls are replete with sculptures of various deities portrayed beautifully in stone.

Built in the Early Chalukya style, this temple In Pattadakal was built by the Rashtrakutas sometime in the early 8th century. The shrine is constructed in the Nagara style and today, only the Sanctum and a passage remains. The inner passageway features stunning images of female figures which are engraved with great detail. The ceiling is replete with sculptures of Somaskanda and the Sanctum features a Rekhanagara tower.

This temple was built in the Rekha Nagara Prasada architectural style. It houses a striking stone sculpture of Lord Shiva slaying the evil demon Andhakasura. The shrine is situated north of the Virupaksha temple and features a Navaranga, and Shukanasa, with a Linga enshrined in the Sanctum. Smaller figures of Kubera, Gajalakshmi and other deities are also found here. The temple is built with great attention to detail and reflects the craftsmanship prevailing in the 8th century.

These two shrines are believed to have been built in the 7th century. The Kadasiddeshwara shrine houses a stunning sculpture of Lord Shiva wielding a Trident in his hands. Both these impressive structures are constructed in the Nagara style and very similar to the Hucchimalli Gudi shrine located in Aihole.

The shrine of Jambulinga is situated behind the Galagnatha temple and features a Sanctum with a Shukanasa and a Navaranga. Idols of Nandi and Veerabhadra are found at the doorway. The Linga is in the inner Garbagriha and the outer walls feature idols of Shiva and Vishnu. The shrine also houses a small Rekhanagara tower.

This shrine is similar in style and architecture to the Jambulinga temple and situated close by. Imposing idols of Shiva, Parvati, Vishnu and various other deities adorn the outer walls of the temple.

This shrine is built in the Vesara style dating all the way back to 680 A.D. It initially featured the Nagara style, but was later gradually altered to suit the Dravidian style of architecture. Several sculptures depicting scenes from the Ramayana and Mahabharata are found here and the shrine is similar in many ways to the Navabrahma temples of Andhra Pradesh. The shrine has a portico, main hall and an antechamber, along with a Sanctum featuring an encircled pathway. The idols of Nandi and Veerabhadra flank the entrance, while the 16 pillars in the main hall feature exquisite feminine figures. The ceiling is emblazoned with images of Shiva-Parvati, Vishnu and the Gandharvas, with several images of couples in amorous positions also depicted in various parts of the temple. The shrine shows signs of being constructed in stages, with the Sanctum also featuring an imposing Rekhanagara tower.

Pattadakkal also features several smaller shrines dedicated to Lord Shiva, with an inscription on a Shaiva stone pillar relating the circumstances which lead to the construction of the temple complex. It also indicates the importance of the site as a prominent Shaiva center. Several other important monuments are found here, with a monolithic stone pillar bearing inscriptions taking pride of place among the lot. A museum with an extensive collection of artifacts and maintained by the Archaeological Survey of India is found on the Bhutanatha temple road for the convenience of visitors.

Architecture of the Pattadakal Temples

The Pattadakkal temples are mostly built in the Chalukya architectural style, and were built from the 5th to the 8th century. A blend of Nagara and Dravidian styles are evident in the construction, which slowly evolved to a unique distinctive style. The 8 magnificent monuments found here are also amalgamations of the north and south Indian styles of temple architecture.

Location – How to reach the Pattadakal Temples

Pattadakkal is a major tourist attraction, attracting numerous visitors from all over the world. It is easily accessible by various modes of transport. Located about 514 km from the capital of the silicon valley of India Bengaluru , it is well connected by Air, Rail and Road

By Air: The nearest Airport is in Belgaum, around 180 km from Pattadakkal. Hyderabad is the nearest International Airport.

By Rail: The Railway Station located in Badami is about 22 km away. Taxis and buses from the station are available to take one to the temple complex.

By Road: Several buses ply regularly from neighboring towns and cities and the temple is easily accessible by road.