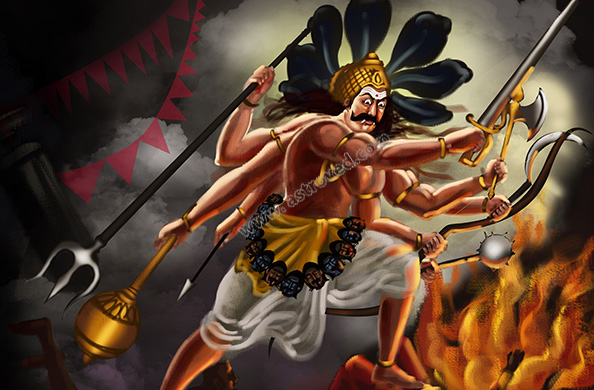 Veerabhadra, also called as Veerabhadra Swamy, is a deity regarded as an aspect of Lord Shiva. He is believed to be Shiva himself in a ferocious form and is also held as a Shiva Gana, the commander of Shiva. Generally, a valiant hero is referred to as ‘Veera,’ while ‘Bhadra’ means a friend. Shiva is said to have taken this fearful form to destroy the fire sacrifice of Daksha Prajapati and quell his arrogance.

Veerabhadra is Shiva at his destructive best. He is anger-personified and fierce-looking, adorned with tiger skin and a garland of skulls and is generally depicted as having several arms, in which he holds many different weapons. He is also seen at many places with Bhadrakali, the equally fierce female aspect, having three eyes and many arms that hold several weapons.

Veerabhadra Swamy is the manifestation of Lord Shiva’s wrath. He is a warrior God who was worshipped by the rulers and soldiers during the times of wars, earlier. People worship the Lord to lead a happy and prosperous life. By worshipping the lord, you can receive moksha (salvation).

Many legends cover the story of Goddess Parvati, as Sati, marrying Lord Shiva and about the destruction of her father Daksha’s sacrifice.

Once the Goddess was born as Dakshayani, the daughter of Daksha, the divine entity considered to be the son of Lord Brahma. She was also called Sati. She was a great devotee of Shiva and set her heart on him right from her young age, and was very determined to attain only him as her husband. But her father had a strong antipathy towards Shiva. Hence, while he arranged for the Swayamvar, the groom choosing function for the marriage of his daughter, he invited almost everyone, but not Shiva. Still, in the ceremony, Sati threw the ceremonial garland in the air praying for Shiva as her consort and there it landed exactly around the neck of none other than Shiva. Left with no option, Daksha had to give Sati in marriage to Shiva, which he did, but then totally cut off his relationship with them.

Later, Daksha performed the great Ashwamedha Yagna, the horse sacrifice, for which he invited all the Gods but not Shiva. Still, Sati went for the ritual, against the wishes of Shiva. There, Daksha spoke disparagingly about Shiva and this hurt Sati very profoundly. Feeling humiliated, thus, Sati jumped into the sacrificial fire and immolated herself. Coming to know of the tragedy, Shiva went wild in anger and sorrow, plucked a strand of his hair, and produced from it, the ferocious and massive form of Veerabhadra. He stood there reaching up to the sky. He was dark, had three flashing and burning eyes, wore a garland of skulls and had many hands carrying deadly weapons. Veerabhadra in his terrifying form marched to Daksha’s place along with the equally fierce Bhadrakali, created by the divine Shakti, and an army of Shiva Ganas, wrecked the sacrificial ceremony, played havoc on all that his eyes fell on, subdued and scattered the assembled Gods and ultimately, chopped-off Daksha’s head and slayed him.

However, acceding to the pleadings of Daksha’s wife later and showing mercy, Veerabhadra placed the head of a goat on the trunk of the slain Daksha and brought him back to life. The chastised Daksha sought pardon of the Lord and became an ardent Shiva Bhakta.

It is said that Daksha is only a manifestation of the ego people have as part of themselves and that it can be destroyed by Lord Veerabhadra, who denotes the divine power, which too, we have in our selves.

Veerabhadra Swamy is worshipped with faith by people across the country. This deity remains to be the principal God of the Virasaivas, the aggressive Shaivites and is much revered in the state of Karnataka. While Veerabhadra can be seen in an idol form in many Shiva temples, there are also temples dedicated exclusively to the Lord in places like Lepakshi in Andhra Pradesh, Perambalur in Tamil Nadu and also near Rishikesh in Uttarakhand.

Worshipping or offering special Pooja to Veerabhadra Swamy on all festival days can appease him and get your desires fulfilled.