Hoysaleswara temple is a shrine dedicated to Lord Shiva , one among the holy trinity in the Hindu pantheon. The temple precincts house several shrines dedicated to various Gods and Goddesses and the primary shrine is the Shiva Lingam . A shrine dedicated to the Sun God within the complex has a magnificent seven foot tall statue of the deity along with a massive stone bull (Nandi, the vehicle of Lord Shiva). There is also a shrine dedicated to Hoysaleswara and Shantaladevi, the queen of King Vishnuvardhan, who built the temple. Located in Halebeedu, in the southern Indian state of Karnataka, the temple is a masterpiece of construction and reflects the glorious history of ancient India. This impressive structure is located at the banks of an enchanting lake and encircled with tastefully manicured gardens. Set in serene surroundings, the breathtaking architectural style and grandeur of the temple add to its mystique and makes it one of the hottest tourist spots in the country. 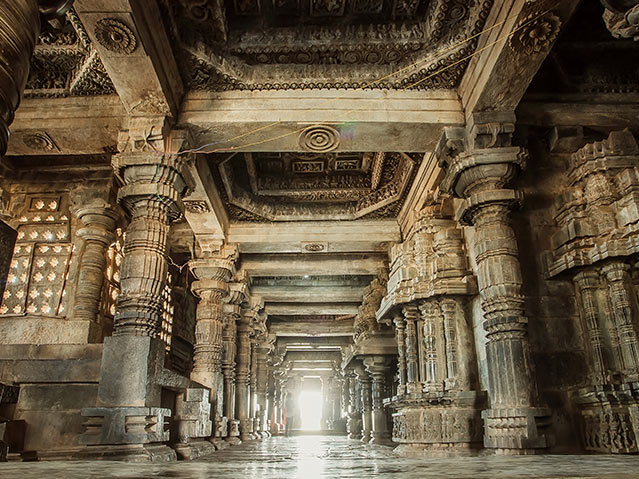 The temple is believed to have been built in the 12th century during the reign of King Vishnuvardhan of the Hoysala Empire. The affluent Shaiva citizens contributed to the construction of the structure to compete with the Chennakesava Temple at Belur. The temple is renowned for its opulence, grandeur and style of architecture. It was ransacked and looted by hostile Muslim invaders in the early 14th century, who literally reduced it to rubble. Thus the city acquired the moniker ‘Halebeedu’ which means the ruined city.

The Hoysaleswara temple is renowned for several features, and abounds with images of Lord Ganesh in various positions adorning the outer walls. In all, there are two hundred and forty images, starting with a dancing image of Lord Ganesh on the south entrance and ending with another image of the Elephant God in the north entrance. There is also an 8 foot tall sculpture of Ganesh  installed on a platform at the South entrance.

The ceiling of the temple is decorated with miniature roofs and attics which are in a state of ruin, but still reflect the grandeur of the temple. Every sculpture of the temple is well defined and clearly visible, which speaks volumes for the builders of this magnificent structure.

The temple also houses a museum within its premises, which is a treasure house of excavated sculptures, wooden handicrafts, images, maps and several other artifacts. It is a virtual treat for visitors who can spend time to linger in the premises and soak in the history surrounding the complex.

The state of Karnataka in South India is replete with many unique temples and especially renowned for architecture from the Hoysala Empire. The Hoysaleswara temple is a remarkable structure and reflects on the intricacy of Hindu style of architecture. The temple is often regarded as an exemplary tribute to Indian craftsmanship, with many aspects having surviving the onslaught of time. The exteriors are remarkably designed with many projections and recesses in the walls, with the interiors quite plain, except for the exquisitely carved lathe shaped pillars. The beams flanking the temple are very tastefully sculpted, characteristic of the artisanship of those times.

The Hoysaleswara temple is a prominent tourist spot where visitors come to witness the grandeur of ancient Indian architecture and the sheer brilliance of the craftsmanship. The deities are not worshipped at present and hence no Pujas, rituals or festivities take place in its precincts.

Location – How to reach Hoysaleswara temple

The Hoysaleswara temple is a prominent landmark of ancient Indian architecture and is easily accessible from all parts of the country.

By Air: The Mangalore airport is the nearest air link to the Hoysaleswara Temple and located approximately 168 km from the shrine. Direct flights from Bengaluru and Chennai ply regularly to and fro from Mangalore. Catching a taxi from the airport to the temple is recommende

By Train: The nearest railway station is located 27 km away at Hassan, which is well linked with other major rail networks. Frequent and regular train service is available from this city.

Taxis, auto rickshaws and buses are available outside the station to take you to the Hoysaleswara Temple.

By Bus: There are frequent and regular buses plying from major cities to the Hoysaleswara Temple.

Local Transport: The Temple is easily accessible by taxis, local buses and autorickshaws.