Introduction about the Guruvayur Temple

The Guruvayoor Sri Krishna Temple is a sacred pilgrim center dedicated to Lord Krishna, an Avatar of Lord Vishnu, the preserver and protector of the Universe. It is located in Guruvayur town of Thrissur district in the Indian state of Kerala which is often referred to as ‘Gods Own Country’. The presiding deity of the temple is Sri Vishnu and he is depicted in a standing posture with four hands, wielding the conch, discus, lotus and mace in each of his hands. The shrine is often referred to as the Dwaraka of South India and also Bhuloka Vaikuntha, the abode of Lord Vishnu . The deity is worshipped according to rituals laid down by Adi Shankara, who sparked a revival of the Hindu religion. It is one of the most important and sacred pilgrim centers for Hindus of Kerala and frequented by devotees from all over the world.

History of the Guruvayur Temple 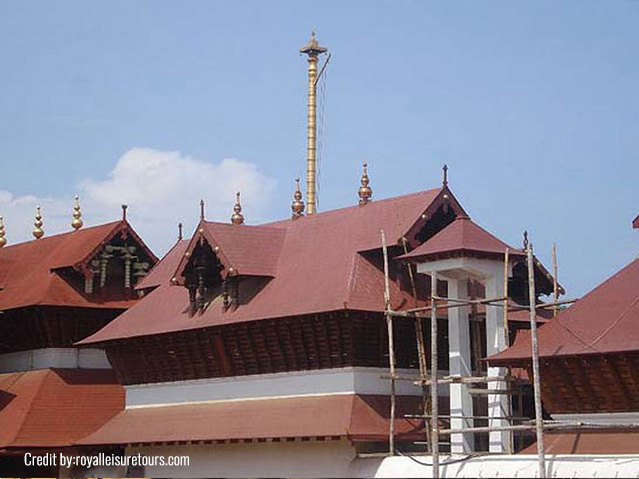 The shrine is believed to have been rebuilt in 1638 A.D, by which time it had become a major pilgrimage center in Kerala. The Dutch plundered and set fire to the temple in 1716. and it was rebuilt in 1766. Haider Ali also came close to destroying the temple in 1766 but was paid a ransom amount by the temple authorities. He however gifted a ‘Devadaya’ to the temple in 1780 A.D. Haider Ali’s son, Tipu Sultan plundered and set fire to the temple in 1789 and attempted to enforce Islam in the state. He was ultimately driven out by the British and the deities were reinstalled in the shrine. It was only in 1841 that the Government of Madras restored the Devadaya usurped by Tipu Sultan. This revived the fortunes of the temple and it became prosperous once again. Much of the temple was rebuilt & renovated and various reforms implemented in the affairs of the temple under the administration of the Zamorin from 1928 onwards. In November 1970, a huge fire broke out in the temple, which was ultimately put out after rigorous attempts by the entire populace of the town. Miraculously, the Sanctum Sanctorum along with the deity and the shrines of Ganesha, Ayyappa & Devi survived the blaze and remained intact.

Significance of the Guruvayur Temple

A unique feature of the temple is that the image of the Lord is not made of stone or metal, but of a mixture called Padala Anjanam or black bismuth. It is said that the Idol was designed by the Lord Himself, who gave it to his devotee to install in a place of his choice. The Idol was subsequently installed in Guruvayoor after Dwarka was engulfed by tidal waves and disappeared under the sea. The idol is so charming that it dazzles everyone with its radiance and depicts the Lord as the epitome of compassion and kindness.

Architecture of the Guruvayur Temple

The ancient history of the temple dates back to almost 5000 years and it was said to have been built by Sage Vishwakarma, the divine architect. The temple was constructed in such a manner that the first rays of the Sun fall directly at the feet of the Lord on Vishu day. The present structure of the temple is built in the typical Kerala style of architecture with the main entrance from the eastern side and another entrance from the western side. The Idol of the Lord is placed in such a manner, that it is visible from the main entrance itself, as if beckoning visitors to enter the shrine.

One of the ceremonies carried out in the temple is the Thulabaram in which devotees are weighed against several articles and edibles, which are ultimately gifted to the temple. Another notable ceremony is Annaprasanam which involves the first feeding of a child.

The Pujas in the temple are conducted according to strict religious guidelines laid down by Adi Shankara himself. The temple celebrates all Vaishnava festivals, especially Vrichika Ekadesi, which is considered very important, with the festivities being observed for 18 days. During this period, the first Puja is offered to Lord Krishna early in the morning, after which several Archanas and Pujas are performed. The period of Chitirai is also a major occasion, since this is the time when the Head priest offers coins to Devotees which are considered a gift from the Lord Himself. A significant feature of the temple is the presence of 52 resident Elephants which take part in the temple celebrations during festivals.

Benefits or Blessings of the primary deity- Guruvayur Temple

The Lord is fondly referred to as Unni Krishnan in Guruvayoor and is considered the source of all animate and inanimate objects. Many couples converge on the temple to carry out their wedding vows within its precincts with the belief that they will have a long and happy married life. Several weddings are conducted within the temple every day and many Keralites consider it mandatory to get married in the presence of Lord Guruvayoor Appan. The Lord is accessible to everyone and comes to the rescue of his devotees in distress, manifesting his grace in numerous distinct ways.

Location – How to reach the Guruvayur Temple

Guruvayoor is situated in a scenic locale, so reminiscent of Kerala and the entire town is surrounded by coconut palms. The temple lends a religious and spiritual ambience to the town, which invigorates one physically and mentally.

Guruvayoor is accessible by several modes of transportation and well connected to the rest of the country.

By Air: Kochi International Airport is approximately 79 kms away.

By Train: Thrissur Railway Station is about 27 kms away and direct trains ply from all parts of India to this juncture.

By Bus: Thrissur Bus Station is about 26 kms away.