Devi Angala Parameswari is a popular feminine deity predominantly worshiped in the Southern state of Tamilnadu and some regions of Andhra Pradesh and Karnataka. The Goddess is basically a fierce village deity associated with Goddess Parvati and is said to be propitiated with blood. She also serves as a rural guardian deity, revered in the villages of South India. The Goddess is also fondly referred to as ‘Adiparasakthi’, being the Avatar of ‘the supreme power called ‘Shakti’ which forms the genesis of the Universe.

This incarnation of the Mother Goddess is worshiped in the form of ‘Ankamma’ in Telugu. ‘Ankamu’ means ‘lap’ in Telugu, signifying her status as the divine consort of Lord Shiva who is portrayed seated on his lap.

Legend has it that Lord Brahma was infatuated with an ‘Apsara’. This nymph was named ‘Thilothama’ and invoked by Brahma in a yagna to rid the world of two demons named Sandobi and Sundaran. So deeply was Brahma attracted to her that he followed her every movement in all the four directions and even grew a fifth head to keep track of her whereabouts.

This frightened the Apsara and she took refuge in Lord Shiva who removed Brahma’s fifth head. Brahma took umbrage to this insult and cursed Shiva that he will be condemned to roam the forests and the fifth head of Brahma called as Kabala will eat all the food from Shiva’s hand. Alarmed, Parvati approached Lord Vishnu for guidance who advised her to scatter food all around. This aroused the hunger of Kabala, who detached himself from Shiva and started to eat the food. Parvati then assumed the form of Angalamman and trampled Kabala with her right leg.

Devi Angalamman resides on earth in a place called Malaiyanur in Tamilnadu, where a temple dedicated to her has been built. The Goddess is worshiped as Sri Mangala Amman in this temple and devotees come from far and near to seek her blessings. This temple is also considered one of the ‘Shakti Peethas’ and it is believed that the right hand of Devi Sati fell on this spot when Lord Shiva was wandering the Universe with the Goddess’ body after she had jumped into the sacrificial pyre of the yagna conducted by her father.

Depiction of the Goddess

Devi Angalamman is depicted with a lotus in her hand signifying calm and tranquility. She is also portrayed wielding a sword in one hand and a trident in the other. A Lion serves as her mount and a thousand red dots of vermillion adorn her forehead symbolizing her thousand eyes.

It is only in recent times that a temple was built for worshiping the Divine Mother. She was earlier worshiped outside the precincts of the villager, with a simple stone structure representing her. However, a shrine was later constructed where villagers could offer prayers and seek her blessings. She serves as the guardian of the people and her thousand eyes maintain a constant vigil on the surroundings. She is adored as ‘Amma’ by her devotees which means mother in Tamil. 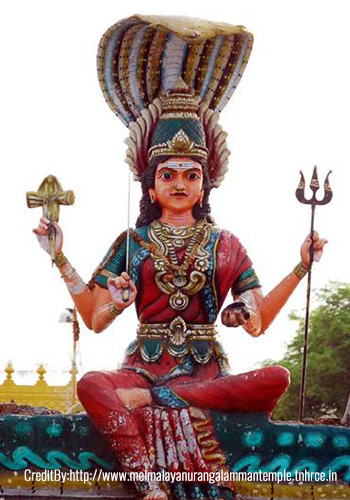 During the Tamil month of ‘Maasi’ (February-March), a ten day festival called as ‘Mayana Kollai’ dedicated to the Goddess is observed by the people of Tamilnadu and the adjoining regions. During this period, the Goddess is adorned with finery and a large procession taken out for the people to have a glimpse of the deity. This grand event is witnessed by numerous devotees hailing from far and near. Priests also release wooden arrows from the chariots to signify the awesome power of the Goddess. Eager devotees await their turn with full enthusiasm to worship and be blessed by the Goddess.

Temples dedicated to the Goddess

The Angala Parameswari temple in the State of Andhra Pradesh holds the distinction of being the largest temple dedicated to Goddess Angalamman. There are several temples dedicated to the Goddess in the city of Chennai ,the prominent ones being the Angalamman temples located in Choolaimedu and Choolai. There is also an Angala Parameswari temple in Tircuchirapalli, Ariyalur, and Thiruvarur District, all located in Tamilnadu.

It is widely believed that worshiping Devi Angalamman is said to give relief from diseases. Those suffering from the spell of supernatural forces or evil spirits are also said to benefit from offering prayers to the Goddess in this temple. An effective way to invoke the Goddess and secure her blessings is by reciting the holy mantra ‘Om Shakti’.

Durga is the universal mother Goddess. She is the aggressive form of the divine Shakti and remains as a very widely worshipped divinity.