Aditi, The Mother of Gods 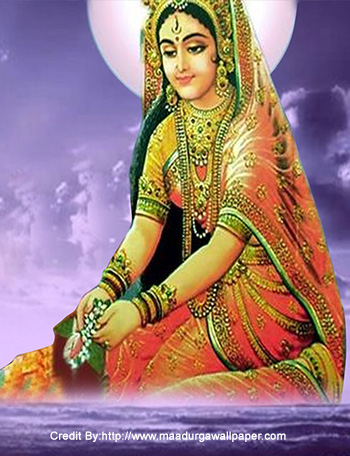 She is A-Diti, the one who is bound-less. Aditi thus remains limitless, immeasurable and inexhaustible, and signifies entirety and freedom. She is also considered the mother of the universe, and as the unified form of all things, and its cause too. She is the illimitable source of all life on earth and outside. Thus, this boundless entity remains the all- encompassing universe itself, but still retains her impeccable purity. She is said to assume various forms, but still retains her core identity. She is also regarded as the Goddess of Space, the past, the future, the consciousness and fertility.

It is also believed that it is Aditi who held the universe in her womb before all creations began, and thus is even considered as the female version of Lord Brahma , the God of creation. She is thus seen as the fundamental of all elements as per Vedantic thoughts.

The most ancient of Vedas, the Rig Veda refers to Aditi, as many as 80 times and terms her as ‘mighty’, while the Vedic texts hail her as the first deity itself. She is also praised as representing divine essence and wisdom. There are detailed references about Aditi in Puranas too. She is regarded as the wife of the great sage Kashyap and the mother of the powerful Adithyas, such as Indra, the Lord of the Devas and Surya Dev, the Sun. Lord Vamana , the 5th Avatar of Lord Vishnu is also considered as her son. While she is also regarded as the daughter of Daksha Prajapathi, somewhere else, she is called his mother too.

As per mythological accounts, Aditi and Diti were sisters, both of whom married sage Kashyap. While the pious Aditi gave birth to virtuous sons who became the Devas, the jealous Diti begot sons, who only became cruel Asuras. When the Asuras became mighty and dislodged Aditi’s sons, the Devas from their position and land, the worried mother approached her husband, sage Kashyap and on his advice, observed fervent austerities, propitiating Lord Vishnu. The Lord, pleased with Aditi’s devotion agreed to her plea of saving her sons from oblivion, took birth as her own son, Vamana, quelled the might of the Asuras and restored the heavens to the Devas.

Vedas hold Aditi as one of the most auspicious and widely regarded divine powers. Goddess Aditi is normally depicted as a very graceful figure, riding a cock or a rooster, that represents strength and honour, and flying all around the space. She has ten hands and holds in them various weapons including the discus, the trident, the sword and the bow. One of her hands is also in the protective Abhaya mudra.

Aditi is regarded as representing aspects like time, fortune, change and protection. She is normally worshipped with the lighting of the butter lamps. It is believed that offering prayers to her will get her protection for the devotees and help them get freed from illnesses and sins, and also, overcome any form of difficulties. Buddhists too worship her with faith, with the lighting of 12 yellow candles.