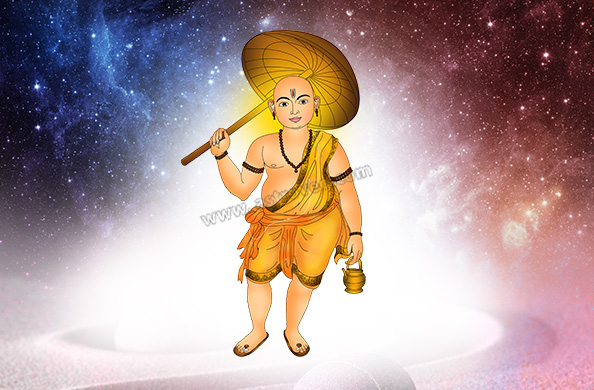 Vamana refers to the Vamana Avatar (incarnation) of Lord Vishnu, the God of protection and sustenance. The Sanskrit word ‘Vamana’ is a term used to refer to a ’dwarf,’ and in this Avatar, the Lord appears as a virtual mendicant, who is young and also short in appearance.

As the protector of the worlds, Lord Vishnu himself takes incarnations on earth whenever the need arises, to defeat evil, restore dharma (righteousness) and to establish goodwill. Vamana Avatar is one such sacred incarnation of the Lord and is regarded as the fifth of his 10 famous incarnations. This incarnation is believed to have been taken during the epoch - Treta Yuga.

Vamana was a short-statured, celibate, Brahmin boy, with adorable divine features. The form can be termed somewhat deceptive, as Lord Vishnu assumed this manifestation to get the better of an upright but haughty demon called Maha Bali and put him in place, for restoring to the Devas, their rightful kingdom.

Bhagavata Purana narrates the exciting legend around Vamana’s incarnation. Once, a king called Bali, who was the grandson of the Vishnu-devotee Prahlada, ruled the Asuras (demons). Bali was basically principled and generous, though egoistic and arrogant. Guided by his Guru Shukracharya, he did severe penance, attained tremendous boons, ran over the earth, snatched the kingdom of the Devas from them and became the undisputed monarch of even the heavens. Bali, thus, became Maha Bali, the one of immense might. However, desirous of growing all the more powerful and for bringing more and more land under his reign, he began performing 100 very powerful Yagnas (fire sacrifices). Thus, he started posing to be a serious threat to the Devas (celestial beings), whom, he had already dislodged from their land and positions. Aditi, a very pious woman, was the mother of Indra, the God of the Devas. Worried about the poor state and the vulnerable position that her son was in, she approached her husband, sage Kashyapa and on his advice, observed intense austerities, propitiating Lord Vishnu. The Lord pleased with her devotion agreed to her plea of saving her son and other Gods from oblivion and took birth as her own son, Vamana.

Soon, the young boy with a sacred thread across his chest, loincloth around the waist and holding an umbrella, walked into the site of Bali’s sacrifice. The glowing radiance of the Brahmachari (celibate) made a deep impression in Bali who welcomed the boy with all the honors and promised to give him in charity, whatever he wanted. Sensing the opportunity, the Lord who had come as the dwarf Vamana, asked for only three paces of land, which he could measure with his own small feet. Though surprised, Bali agreed to this strange request, and made a promise. And lo and behold! Immediately, the boy began growing immense in size and in no time, stood there in front of Bali as Trivikrama, in all his massive form. With his first step, he measured the earth and with the second, he simply covered all the heavens. Bali realized who the stranger actually was, and though badly outwitted, he was still honest and graceful and bowed to the Lord, offering him, his head for placing his third step. Vamana did so and pushed Bali to the world below, thus restoring the heavens to the Devas. However, supremely pleased with Bali’s integrity and devotion, the Lord blessed him with immortality, and agreed to his wish of being his well-wisher, protector, and guardian, forever.

People offer regular worship to Lord Vishnu and his incarnations like Vamana at homes and in temples, praying for their welfare. Vamana Avatar is said to have taken place on Shravana Nakshatra and also on the 12th Dwadasi day of Shukla Paksha, the waxing Moon phase in the month of Bhadrapada (August–September). This is celebrated as Vamana Jayanthi or Vamana Dwadasi, when people offer special worships to him, seeking relief from sufferings and praying for salvation.

Vamana Avatar is said to have taken place on the Dwadasi, the 12th lunar day of Shukla Paksha, the waxing phase of the Moon during the month of Bhadrapada (August–September). The star, Shravana also rules that day. These occasions are celebrated as Vamana Jayanthi or Vamana Dwadasi, when people offer special prayers to the Lord, seeking relief from hardships and attain Moksha (salvation).