Dr. Mario Molina was the first Mexican-born person to receive a Nobel Prize in chemistry. He received the award (along with two others) in 1995 while working as a professor at Massachusetts Institute of Technology (MIT). He was honored for his contributions in discovering and explaining the depletion of the Earth’s ozone layer from chlorofluorocarbon gasses (CFCs). At the time of his discovery, CFCs were being used in refrigerants, solvents, and aerosol propellants. The Nobel Committee called the ozone layer “the Achilles heel of the universe.”

Molina’s discovery not only informed the scientific community but led policy makers to make laws regulating the use of CFC to protect the Earth’s ozone layer. According to Molina, the ozone layer could be renewed if we do “not use the CFC gasses anymore, not to manufacture them anymore. That is already happening. Also, the Sun creates ozone so that the ozone layer will repair itself. But it will take many years — 20 or 30 years.”

MIT President Charles Vest noted that Molina’s Nobel Prize “emphasizes that the most fundamental scientific inquiry can turn out to have important ramifications for our world. It also shows that sometimes nice guys finish first.”

I was curious to look at Molina’s chart, as he had a deep fascination with science even as a child. He has shared how at age 10 or 11, he took over an unused bathroom in the family home with his parents’ permission and converted it into his “chemistry laboratory.” Each day, he would play for hours in his lab with his toy microscope and childhood chemistry set. Eventually, his aunt, who was a scientist, helped him conduct more advanced experiments than his childhood chemistry set had instructions for.

I ran the chart for Molina using his full name as per Spanish naming customs (Mario José Molina-Pasquel Henríquez) for his birth date, time and location of March 19, 1943, at 10:00 AM CST (UTC -6.0) in Mexico City, Mexico. I used the Goravani software using settings similar to AstroVed’s (Calc Type = Full, Moon from Earth’s = Center, Nodes = Mean).

The source for his birth data comes from AstroDataBank which rates the reliability of the data as AA (an excellent rating) with the source being quoted from his birth certificate/birth record.

Counting clockwise from his Ascendant (also known as Lagna or Rising Sign) of Taurus as his 1st house, Molina’s 10th house of career is in the humanitarian sign of Aquarius. Mercury sits in his 10th house of profession, a placement that can give blessings for success and good reputation in one’s work.

Mercury in the 10th house is said to support a person in being a good student and can give benefits of a good education. The custom in Molina’s family was for students to do some of their schooling abroad, so he attended Institut auf dem Rosenberg in Switzerland for part of his childhood. He later returned to Mexico to receive a Bachelor’s degree in Chemical Engineering at the Universidad Nacional Autónoma de México.

He went on for postgraduate work at University of Freiburg in Germany and later completed his Ph.D. at the University of California, Berkeley. For his graduate studies, he took advantage of more advanced equipment that he had not been able to use before.

In 2004, he accepted a position as a professor at the University of California, San Diego and a role with the Center for Atmospheric Sciences at the Scripps Institution of Oceanography in La Jolla, California. In 2013, he received the United States Presidential Medal of Freedom.

Also, in his chart Ketu also sits in Aquarius. Ketu in the 10th house of work is said to assist a person in following their passion as a career, so this combination helped Molina follow his childhood dream of being a chemist into a reality as an adult. Ketu helped give him a clear goal of what he wanted to do that had a sense of higher aspiration and gave him the ability to trust his intuition throughout his life.

A student interviewer once asked Molina, “What qualities do you need to become a scientist?”

He replied, “First of all, you need curiosity. You want to find out how things work. You also need creativity — to find out new things, the things that are not discovered yet in nature. You have to have patience and perseverance, and you need to work hard. But perhaps most importantly, you have to enjoy what you do. Then you will do it very well.”

Patience, perseverance, and hard work are all positive qualities associated with Saturn, the planet who rules Molina’s 10th house of career. Saturn’s influence has helped him to keep a steady course with chemistry. Mercury in the 10th house gives him intellectual curiosity. 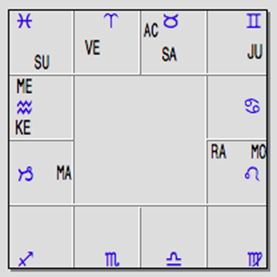 His Moon is in the star or Nakshatra of Magha in the Zodiac sign of Leo, the mighty lion. The birth star Magha can give blessings for power. Molina is considered a world leader in the area of chemistry of the stratospheric ozone layer. His work is said to have “led to the first definitive demonstration of a truly global environmental effect of human activities.”

Rahu in Leo joins his Moon. On the positive side, Rahu can give creative, unusual ideas and can be very supportive of those doing research.

Practical suggestion: We can regularly ask Rahu to give blessings to all researchers, scientists, and inventors who are working to solve some of the urgent problems of our time. We can use simple mantra for Rahu: Om Rahave Namaha.

Molina’s Mars is exalted (most comfortable and strong) in Capricorn, a sign of ancient past lives skills and abilities. Capricorn is his 9th house of grace and past life good merit. Mars here has aided him in having the courage to stick up for his findings. The public and the press were both slow to pay attention to his discoveries (his original article was published in 1974 in Nature).

However, Mars is a planet that likes to solve problems. Molina persisted in sharing the dangers of CFCs to the ozone layer, and people around the globe began to talk and created the will to regulate CFCs. His Mars gave him a strong sense of purpose.

At this time, nearly 200 countries, including the USA and China, have agreed to speed up the elimination of hydrochlorofluorocarbons entirely by 2020. Molina has commented that he feels “proud of having uncovered an important problem and that we figured out how to solve the problem for the benefit of people all over the world.”

Molina is proof that “a good scientist can do a lot of good for the world.”

Venus is the planet that rules his Ascendant of Taurus. Venus sits in his 12th house of enlightenment in the star of Ashwini, a star associated with healing. This placement of this gentle planet has helped Molina to be an optimist. He has stated, “I have a lot of trust in the children now, in young people. I think they are paying more and more attention to the problems of our planet. That’s the big hope I have. I think the children can do better than we did.”

Molina was once asked, “Did you have scientists who were heroes to you, and were any of them Latino?”

He replied, “The scientists I looked up to at the beginning were not Latino. They were famous scientists of many years ago, like Madam Curie. Later, I realized that there were also, but a very few, Latino scientists. There were good ones, but very few, because there wasn’t as much a tradition to be a scientist in our culture. But this is changing. Many Latino kids should become scientists because we need scientists all over the world from all different backgrounds. We have many tough problems, and we need everybody’s help to solve problems.”

Valli is available for ½-hour and 1-hour Live Astrologer Consultations (LAC) at AstroVed (USD global version only). She encourages people to create a free account at AstroVed and run free reports about their own Birth Chart, Birth Star, Moon sign, and Planetary Influences. This is a simple way to begin to make friends with astrology. She invites everyone interested to learn more about Vedic astrology to join a newly formed Facebook group for Astrology Club – AstroVed.