Bengaluru City has two ISKCON temples, one of which is the Sri Radha Krishna Temple, located on Hare Krishna Hill in Rajajinagar, a prominent area of the city. Touted as one of the largest ISKCON temples in the world, ISKCON Bengaluru is a charitable organization and the brainchild of Srila Prabhupada. The objective of the society is to propagate Krishna consciousness across the world and spread the message of the Bhagavad Gita and the Srimad Bhagavatam. The temple is also a cultural complex with deities of Sri Radha Krishna, Sri Balarama, Sri Nitai Gauranga, Sri Srinivas Govinda, Sri Prahlada Narasimha and Srila Prabhupada. The temple complex houses several large rooms and halls, each fulfilling a different purpose. This popular pilgrimage center cuts across religious lines and attracts devotees from all over the world.

History of the Iskcon Temple Bangalore 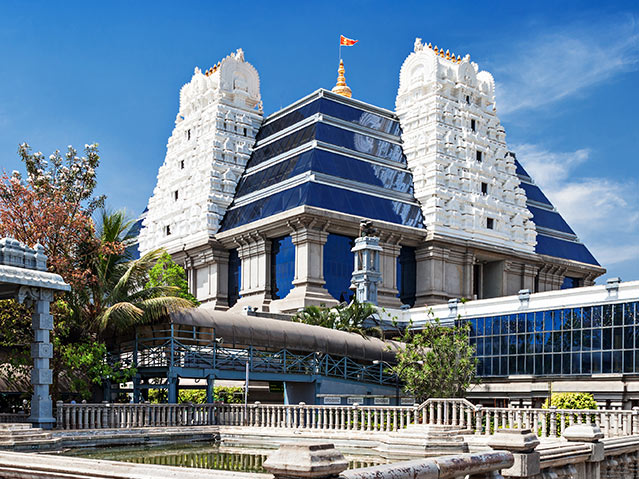 The Hare Krishna movement in Bengaluru gained momentum sometime in the mid 1970’s and devotees started initiating activities of ISCKCON in different parts of South India. Several cultural activities were held and many life members were enrolled, with the Society being registered in 1978. Till 1987, the activities were conducted from a rented house and an application was made to the Bangalore Development authority for allotment of land to build a Temple, which was subsequently conceded on a seven acre hillock. This particular site was for all practical purposes nothing but a waste land and a temporary shed was erected to set up a makeshift temple. The deities of Sri Krishna and Sri Balarama were installed in the shed and duly consecrated. Soon after, a permanent temple complex was planned on a grand scale with the blessings and guidance of Sri Bhaktivedanta Swami Prabhupada, the founder of ISKCON, to promote Vedic culture and spiritual learning. The project was conceived and executed by Shri Madhu Pant Dasa and subsequently inaugurated in 1997 by Dr. Shankar Dayal Sharma, the President of India.

Significance of the Iskcon Temple Bangalore

The ISCKCON shrine in Bengaluru houses six shrines and there is a gold plated Dhwaja-Stambha (flagpost) which stands at a height of 56 feet and gold plated Kalash Shikara which is 28 feet high. The Temple is a sight to behold after dark when it is illuminated and lights up the surroundings with its brilliance. The entire complex is a picture of calm and serenity with Hymns of Krishna being chanted which instills peace into the hearts of devotees. Visitors can watch episodes of Little Krishna in the Animation Theatre and browse the display of books written by Srila Prabhupada which are available in several Languages. There is also a Dakshinakrti (handicraft section) with an impressive collection of items for visitors to purchase.

‘Dharani’ the organic food outlet offers a variety of healthy edibles for visitors to choose from.

The Annakuta restaurant within the temple premises serves delicious Sattvik food dishes which are prepared without onion and garlic.

Visitors can also partake of the delicious Sri Krishna Prasadam which is distributed free during the Darshan hours. While leaving the temple, one can visit the various stalls selling religious artifacts at the exit and purchase souvenirs.

Architecture of the Iskcon Temple Bangalore

The ISKCON Temple in Bengaluru is built in the contemporary architectural style and pays tribute to the builders for the design and outlay of the structure. The ambience is exhilarating with a feeling of peace and calm pervading the entire temple complex. The chanting of the Maha Mantra ‘Hare Rama Hare Krishna’ pervades the atmosphere and everyone present is taken in by the charm the temple exudes. The temple represents a perfect blend of spirituality and modernity with its modern façade and holy ambience.

Several Aartis are performed every day in the temple and the evening Aarti is followed by Kirtan with devotees dancing and chanting "Hare Krishna Hare Rama". The temple celebrates all festivals associated with Lord Vishnu in his various Avatars, and also Vedic culture. Sri Krishna Janmashtami, the birthday of Lord Krishna is celebrated with great fervor and devotees converge on the temple from all parts of the world to witness and participate in the proceedings. Other occasions like Guru Poornima, Rama Navami, Radhashtami, Narasimha Jayanti and Govardhan Puja are also major festivals celebrated in the temple with great fanfare. The ambience prevailing in the ISKCON Bengaluru temple during festivals is so soothing and serene that devotees are spiritually transported to another realm altogether.

Benefits or Blessings of the primary deity- Iskcon Temple Bangalore

Praying at the ISKCON temple is said to free one from the cycle of birth and death. It is also believed that the accumulated sins of the lifetime are washed away and one becomes purified. Even the worst sinner is absolved of sins with the blessings of the Supreme Sri Lord Krishna.

Location – How to reach the Iskcon Temple Bangalore

Some important information for visitors:

Located on the Hare Krishna Hills in North Bengaluru, the ISKCON Temple is well connected to the city by various modes of transport. Buses, three wheelers and taxis are available for the convenience of visitors.

Bengaluru is well connected by Air, Rail and Bus to all major cities of India and easily accessible.

By Air: The Airport is located at a distance of approximately 35 kms from the Temple.

By Rail: The city Railway Station is located about 16 kms from the Temple

By Bus: There are several buses plying to and from neighboring cities and across the whole country to Bengaluru.

Metro Station: The nearest Metro stop is Mahalakshmi Station, which is walkable distance from the Temple.