Lingaraj Temple is an oldest Hindu shrine dedicated to Lord Harihara, a combined form of Lords Shiva and Vishnu, situated at Bhubaneswar, Odisha. As the most famous tourist spot and landmark of the state, this is the largest temple of Odisha. The temple is about a thousand years old and constitutes the Golden Triangle of Odisha – Konark, Bhubaneswar and Puri.

Bhubaneswar is a revered pilgrimage destination visited by devotees of both Lords Shiva and Vishnu. The place has a mention in the Bhrama Purana and is referred as the Ekamra Kshetra, as the deity of Lingaraj was originally found under a mango tree (Ekamra). Lingaraja temple is maintained by the Temple Trust Board and the Archaeological Survey of India (ASI). The temple has an average of 6,000 visitors per day and receives lakhs of visitors during festivals such as Shivaratri. 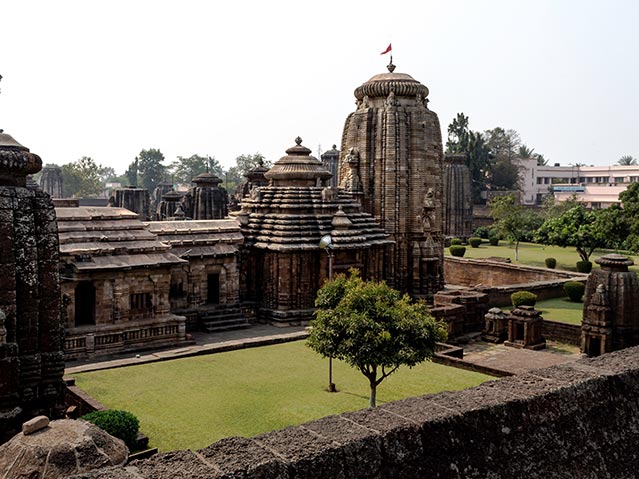 ‘Lingaraj’ means the King of Lingas and the temple is believed to have been built first by the ruler Jajati Kesari of the Somavamsi Dynasty in the 7th century, who shifted his capital from Jaipur to Bhubaneswar. The temple is more than 1100 years old, dating back to the last decade of the 11th century. However, there are references of the temple in sacred texts from the 7th century. In this holy shrine, Lord Shiva is worshipped as Tribhuvaneswara which means the Lord of the three worlds – Heaven, Earth and Netherworld.

The lingam at the Lingaraj Temple is a swayambhu lingam (self-manifested form) and emerged only during the Dwapara and Kali Yugas. The lingam is a natural unshaped stone that rests on a Sakti. Such swayambhu lingams are found in 64 other parts of India. The Gangas amended the temple and introduced certain Vaishnavite elements like images of Vaishnava Dwarapalas namely Jaya and Prachanda, Jagannatha, Lakshmi Narayan and Garuda.

Lingaraj Temple is constructed in the remarkable Kalinga style of architecture. The Lingaraj Temple is situated in a spacious courtyard spanning a vast area of 250000 sq. ft. and is built of red sandstone. The temple is surrounded by a laterite compound wall measuring 520 ft by 465 ft. The Shikara or the spire is intricately sculpted and extends to a height of 55m. The entrance gate in the porch is made of sandalwood.

The main entrance faces the east and there are small entrances in the north and south. Built in Deula style, the temple has four components – Vimana (Spire under which the main sanctum remains), jagamohana (assembly hall), natamandira (festival hall) and bhoga-mandapa (hall of offerings), arranged in descending height. The spacious courtyard comprises around 150 small shrines dedicated to various Hindu Gods and Goddesses. The Rekha Deula has a tall pyramidal tower intricately sculpted with female figures in different poses.

Shivratri is the main festival celebrated here annually in the month of Phalgun (Feb – Mar), when the temple is visited by thousands of devotees. Celebrations are primarily conducted all night long. Devotees fast for the whole day and offer Bel leaves to Lord Shiva and break their fast after the Maha Dipa (divine huge lamp) is lit.

Ratha Yatra or the chariot festival is conducted every year on Ashokaashtami. The idol is placed in a chariot and taken as a procession to the Rameshwar Deula temple and innumerable devotees pull the well-decorated chariots of Lingaraja and his sister Rukmani.

This festival marks a 22-day celebration in the temple when the deities and servants of the temple are smeared with sandalwood paste and they disport themselves into specifically made Bindusagar tank.

Sunian day This occasion is observed from royal times in the month of Bhadra (Aug – Sep), a day when temple servants, peasants and other holders of temple lands offer loyalty and honor to Lingaraja.

A holy tank called Bindusagar (means ocean drop) Tank is present in the Lingaraj Temple, which according to Hindu Myth is believed to be filled by an underground river. The water of the tank is considered very sacred and is believed to cure many physical and spiritual illnesses.

How to reach Lingaraj Temple

By Air: The nearest airport is Biju Patnaik Airport which is situated at the heart of the city of Bhubaneswar and is connected to all major cities of the country such as New Delhi, Hyderabad, Kolkata, Mumbai and Bangalore.

By Rail: Many express and superfast trains ply through the nearest railway station Bhubaneswar. It is well connected with every major city in India.

By Road: Bhubaneswar is situated on the National Highway no 5 that runs between Kolkata and Chennai. The city is accessible by public and private service buses.