Tara is a powerful Goddess. She is one of the manifestations of Kali, the fierce form of divine Shakti, who is also called in many other names like Parvati, Durga and Bhagavathi.

Kali is also known as Adi Parashakthi, the primordial, all-powerful feminine energy and is worshipped in ten forms that are known as Dasa Mahavidyas, the ten Goddesses of great wisdom. Goddess Tara is considered the second of these ten divine aspects.

What is the significance of Goddess Tara?

The word Tara itself is well pronounced, as it means, ‘one who protects’ or ‘the savior’. Tara also means ‘a star’. A star is brilliant and beautiful and so is this Goddess, who remains the core of a being and the basis of the life force. 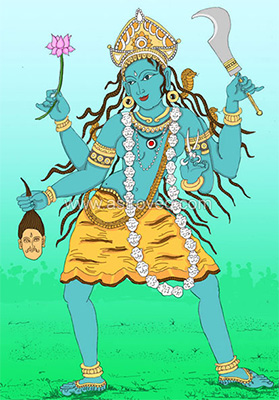 But she is fierce in appearance and is ferocious even to look at. She has a blue complexion and hence is also known as Neel Saraswathi. She stands on her consort Lord Shiva, who lies supine, docile, and inert underneath. Wearing only a tiger skin garment at her waist, she is adorned with a garland of skulls or severed human heads.

With tongue hanging out and blood oozing out of it, and her arms holding blood stained weapons, she does look intense and frightening. Tara, in many respects, is also similar in appearance to Kali and hence shares with her many epithets like,Bhadra Kali, Ugra Kali, Mahakali, and Kalika. She is said to be fond of blood, which she herself is smeared with. This can be taken to mean that she gets pleased with sincere and self-sacrificial devotion.

What benefits accrue on worshipping Tara?

Tara may look menacing, but she is a great savior of the virtuous and the destroyer of evil. She is attributed to have motherly instincts in abundance and can be easily approached and also propitiated. Her worship can bless the devotees with success in endeavors and achievements in all spheres. She can also bestow one with articulation skills and provide protection against various dangers, like the ill effects of planet Jupiter.

The world is the domain of every living being and it is meant to accommodate not only all animate but also inanimate beings which constitute an integral part of existence.