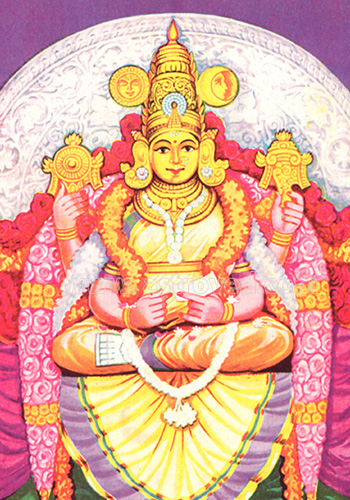 Goddess Shakti is associated with the dynamic force that pervades the entire Universe and responsible for creation. Her name itself implies the primordial cosmic energy which is responsible for all events, actions and other related factors pertaining to existence. Shakti represents the very embodiment and personification of Divine feminine power and is referred to as the ‘Great Mother’ in Hindu culture. She manifests through female creativity and fertility on the Earthly plane and plays an all important role in rejuvenation and the cycle of birth and re-birth. Thus, she also fulfills the vital role of casting off the old and ushering in the new. Her power is also present in the masculine aspect of things, albeit in a subtle way. Goddess Shakti is also worshipped as the Supreme Being and appears in various Avatars as Adi Parashakti, Adi Shakti and Tripura Sundari, all forms of the female counterpart of Lord Shiva, Goddess Parvati.

In the Hindu pantheon, the holy triad of Shiva, Brahma and Vishnu is all powerful and occupies the highest level in the cosmic sphere. The central point of this all pervasive mighty trinity is occupied by the primordial force ‘Shakti’ which is said to be self-born, independent, and all consuming, having no beginning and no end. This forms the very core of the visible and invisible Universe and can never be destroyed by any force, however so great.

Many associate Goddess Shakti as a part of a group of eight Mother Goddesses who represent the power and energy of major Hindu Gods figuring prominently in Hinduism. Some of her incarnations include Ganga, Kamakshi, Kanakadurga, Mahalakshmi, Meenakshi,  Manasa, Mariamman, Yellamma, Poleramma, Gangamma and Perantalamma.

The Goddess is also revered as ‘Amma” (mother) in most parts of South India and there are several temples dedicated to the Goddess in her various incarnations in these regions. Many parts of the rural community consider her as the protector of the village and treat her as the deity who safeguards against wicked and harmful aspects. She is also the one who sees through all wrong doing and punishes the evil, while extending her benign grace to all those worship her. Some also worship her for curing diseases, especially chicken pox and similar ailments. Of course, she is also sometimes used for tantric worship and by unscrupulous elements to arouse fear and frenzy in the community.

The Goddess is venerated in many Avatars and forms the basis of Hindu cult worship as in:

This sect regards Goddess Shakti as the Supreme Being, with all other Gods and Celestial Beings regarded as her manifestations. Shakti is revered as the all-encompassing, all-consuming and all-pervading aspect of worship.

Adi Parasakthi who manifested as Tripura Sundari, is considered as the direct manifestation of Shakti and represents the ultimate power inherent in all objects of creation. The Goddess forms the basis of all feminine aspects in Hindu deities and considered the source of all three primary female Goddesses, in the form of Parvati, Saraswati and Lakshmi. Shakti also plays a vital role in the Smarta Advaita sect of Hinduism advocated by the great saint philosopher ‘Adi Sankara’.

The Shakti Peethas which are located in various parts of South Asia are all Shakti centers of worship. They can be found in India, Sri Lanka, Nepal, Bangladesh, Tibet and Pakistan, all regions which once constituted parts of India.