Matangi is a regal form of the Goddess, who bears a close link with Saraswathi, the Goddess of Learning. She is one of the manifestations of Kali, the fierce form of divine Shakti, who is also known by many other names such as Parvati,Durga and Bhagavathi.

Kali is also known as Adi Parashakthi, the primordial, all-powerful feminine energy and is worshipped in ten forms that are known as Dus Mahavidyas, the ten Goddesses of great wisdom. Goddess Matangi is considered the ninth of these ten divine aspects.

What is the significance of Goddess Matangi? 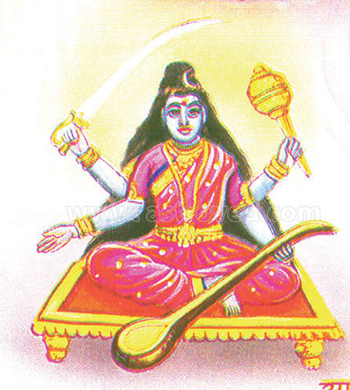 Matangi is a very aggressive Goddess, considered the Tantric form of Saraswati. Depicted in bright, emerald green, she rules over the fields like knowledge, speech, music and arts. Though considered as the power over such finer aspects of life, Matangi remains linked strangely to the opposite, representing things like inauspiciousness and impurity.

This aspect is highlighted in the most common of her forms, called Ucchishta Matangi, who carries a sword, goad, club and a noose in her hands. Ucchishta actually means partially eaten and leftover food, which stands for pollution. This Goddess is actually offered stale food with the left hand, which is considered impure. She is also known as Chandalini, the Goddess of Chandals, the lower castes. However, in her well known form of Raja Matangi, she remains a royalty, seated on a throne, holding a parrot and playing veena.

What are the benefits of worshipping Matangi?

Worshipping Matangi will help the devotees to get an attractive and magnetic personality, sound articulation, and mastery over knowledge and skills. They can also influence others and gain control over enemies. Her blessings can offer protection against many impediments like, negative energies, marital discord, poor studies and career, memory loss, stammering and Sun’s malefic effects.