What is the importance of Goddess Gauri?

Gauri is the divine Shakthi and the mother Goddess, who has many forms and is known in many names such as Parvati, Durga, Kali and others. The word Gauri means ‘white’, and the Goddess is regarded as a symbol of brilliance and auspiciousness, and as one who punishes the wicked and protects the good. She is generally seated on a lion, tiger or a bull, has four hands, holds a trident, mini-drum and lotus in three of them, while the fourth is in the posture offering protection.

Gold is called Swarna and the dazzling Goddess is referred to as Swaran Gauri. 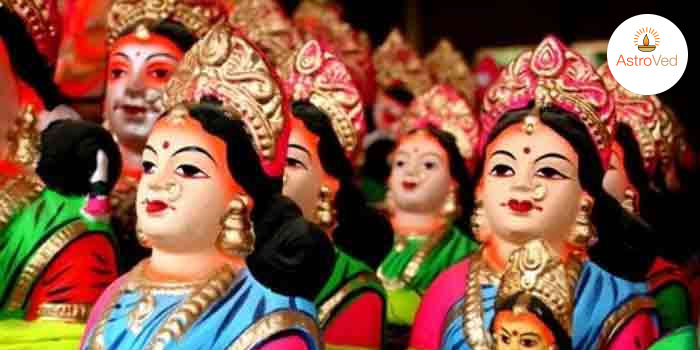 What is Swarna Gauri Vrata?

Swarna Gauri Vrata is a sacred observance when Gauri is worshipped in the form of Goddess Parvati. This is principally observed in the Southern parts of the country on Tritiya, the third day in the bright moon fortnight of Shukla Paksha in the month of Bhadhrapadha (August- September). The same occasion is observed as Hartalika Teej in many northern states. There is a belief that Gauri visits her parents’ home on this day as any married woman does and that her son Ganesha comes the next day to take her back to her abode, Kailasha.

As per the scriptures, once, Parvathi did intense penance for 16 years living only on grass and fruits, to obtain Lord Shiva as husband and the pleased Lord united with her in marriage. Many married women perform this Vrata for 16 years to commemorate this event.

What is the legend associated with the Vrata?

An interesting legend regarding the Vrata narrates the story of king Chandraprabha of Vimalapur, located on river Saraswathi’s banks. Once he went into a dense forest for hunting, where he found many women offering special worship near a pond. They were observing the Swarna Gauri Vrata that can fulfill desires, clarified one of the women, who also explained to the king, the rituals associated with it. Accepting and tying on his right wrist, the sacred thread offered in the Puja, he returned to his palace and explained to both his queens, about the greatness of the Vrata.

The first wife was skeptical, snatched away the scared thread from her husband’s wrist and threw it on a dried plant. But to everyone’s surprise, fresh leaves began sprouting out from there, shortly. Seeing the miracle, the second wife tied the thread to her wrist, did the puja with full faith and got blessed with a good life and her husband’s love. But instead, the elder one had to leave the palace, wander in wilderness and suffer a lot until she repented and was pardoned by Goddess Parvati. Observing the Vrat with full devotion, she too was blessed later with all the love and happiness.

How is Swarna Gauri Vrata observed?

While married woman observe this Vrata for the wellbeing, longevity and prosperity of their husbands, young girls pray for getting good life partners. It is believed that Goddess Parvathi descends on earth on the occasion and can bless her devotees with courage and power.

A clay idol of Goddess Gauri is decorated and placed on a rice filled silver or copper plate, and is offered flowers, leaves, turmeric paste, kumkum, cloth etc. The women then worship a turmeric coated thread with 16 knots and tie them in their right hands. They also prepare and offer to the deity, various delicacies like coloured rice, sweet pudding, vegetables, salad and many more, and enjoy the Prasad together.

Many women perform this Vrat in their maternal homes. After the puja, they exchange with others Morada-Bagina, that is, the bamboo plates containing 9 types of grains, jaggery, bangles, kumkum, turmeric, betel leaves, nuts, fruits and some cash donations. On the next day, they see off Gauri Maa by offering her Udi, that is, items like flowers, kumkum, turmeric, rice, betel nuts and dry coconut. At the completion of the Vrat, the idols are immersed in water.