The Great Agastya Muni and his Places Of Power

Agastya Muni or Sage Agastya is one of the renowned sages of India, who belongs to the “Siddha” cult. Agastya Muni’s birthday is venerated on January 13th 2020. He initiated the Guru Lineage, in India, where the Yoga initiation, should be given by a Guru to his disciples. It is believed that he was initiated yoga by Lord Shiva himself, and is considered as merged along with Lord Shiva himself.

Sage Agastya has said to be wandering along with the forests of the border of Kerala and Tamil. He has pioneered “Agastyam”, a book on Tamil grammar, which is considered even older than “Tholkapiyam”. His reference is found in the ancient texts like Varaha Purana, Agastya Samhita found in Skanda Purana. He has initiated “Kriya Yoga Sadhakas” to “Maha Avatar Babaji, an immortal saint who dwells in the Himalayas, who is also revered as one of the greatest saints of India. 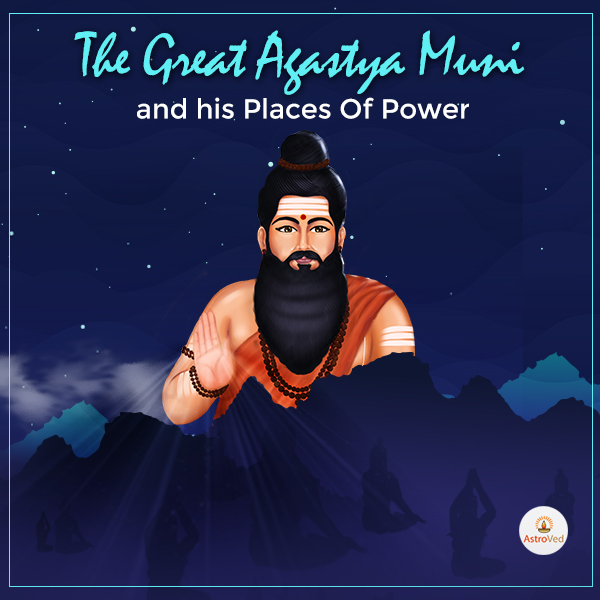 Agastya Muni was born to a Saptarishi Pulasthya and Urvashi, a celestial maiden who is blessed with the power of levitation. Sage Pulasthya, is highly benevolent and traveled astrally to heal the sick and deprived people, as he hears their prayers. He uses yantras and tantra and he performed indescribable miracles. Sage Pulasthya also had an astral weapon of Brahma Astra, which could be countered by only one amazing defense called Brahma Danda. It is also believed that the Pulasthya passed it to Lord Krishna through Drona, the Guru of Pandava Kings.

The Sadhana and Path of Agastya

Sage Agastya had spent some years in Varanasi and established several Ashrams, or hermitage in North India. Agastyamuni near Rudraprayag, located in the Himalayas, is his important Ashram. Nashik Ashram on the banks of the Pravara River in Bhandardara town is also highly revered. A town called Agastyapuri, lies on the banks of river Godavari, near the town Nashik. It is believed that his wife is manifested through special powers. He is called “Kuru” Muni, as he has short stature.

He is an important link between Shaivism and Vaisnavism. He was a great Shakti devotee too and belonged to the lineage of Tripura Acharyas. His devotion towards Goddess Tripura sundari’s magnificent yantra has curbed his sins and was raised to the highest level of sadhana. He was blessed with immortality, and his contribution towards “Astrology” is tremendous. He even had the power to attain samadhi at his own will.

Agastya Migrates to the South

It was through the instruction of Lord Shiva, which made the Sage shift towards South India. In those days, South India was a wast land and even extended further Cape Comorin. It is believed that due to several natural calamities, the eath was submerged below the sea.
He has patronized Tamil language and has rendered several books, poems, and literary works. He has also contributed towards Siddha Medicine and Astrology. Tamil is one of the oldest languages in the world and is the mother of many other languages, out of which even many other languages emerged. Sage Agastya believed that marital life is also one of the ways to attain salvation, as he emphasized that “Illaram is Nallaram”, meaning family is a divine path for salvation. He even considered his wife as Goddess Mahalakshmi, the Goddess of Wealth. His disciples were also highly revered, they are Rama Devar and Sundaranandar. He along with his disciples had also participated in the ancient Sangam, a conference on Tamil held in Madurai.

Jeeva Samadhi is the process of convergence of the soul of an individual, with the divine Cosmic energy. When a Jiva Atma(Human) is dissolved into Parmathma(God), the energy is mixed into the divine force of nature. This is the commencement of a voyage of the transformation of the physical cells to a whole new adobe, by the command of Lord Shiva. Sage Agastya also experienced a similar state, where his mortal body is kept at the present site of Kombeswara Temple in the hamlet Thiruvaduthurai, near the town of Kumbakonam. This is considered highly sacred, and one can go to the state of high divine energy.

The immortal soul of Sage Agastya was assimilated into the divine energy of the cosmic force, leaving his body in the divine temple of Padmanabaswami Temple in Thiruvananthapuram, Kerala. This is considered as a divine state, where one has to perform several austerities and meditation, before attaining this powerful his Samadhi experience.

Padmanabaswami Temple is enriched with both Spiritual and Material Wealth. Many historians refer to this temple as “The Golden Temple”, as there is an abundance of wealth. This is one of the Divya Desams, which is called 108 principal Holy Abodes of Lord Vishnu. It is believed that the king of Nepal has donated enormously. Currently, the rulers of Travancore are the caretakers of the temple.

Agastya Lives in the Southern Forest:

Agastya Malai is between the hamlet Courtallam and Neyyar Wildlife Sanctuary. It is believed that these Siddhas are still living in the forest even today. Sages like Mahavatar Babaji and his partner Nityapriya Mataji; Sage Agastya and Lopamudra are still in their eternal form. They have higher cosmic energy and can reach their devotees and help them accordingly. They are lifted to the level of Supreme beings, from the level of sentient beings, by their severe penance, austerities and several years of meditation. They are in unison with the Gods and Goddesses.

Kriya Yoga Master Babaji also is known as Mahaavatar Babji is one of the disciples of Sage Agastya. Mahaavatar Babji is believed to have lived during the 2nd century BC. He completed tapas in Kartirgama, Sri Lanka, along with other sages like Siddha Boganathar. Since he wanted to learn Kriya Yoga, He levitated to the state of Nirvakalpa Samadhi.

He first sought the great Saint Bhogar, who made the ‘Navapashana Statue of Lord Muruga”. Then he sought Diksha from Agastya. Mahaavatar Babji continued his intensive yogic sadhana, which is a severe austerity, done without consuming food or water, and should be in the state of meditation for several years together. Mahavaatar Babaji did sadhana until he collapsed, and finally won the grace of Sage Agastya. Sage Agastya appeared before Babaji and saved him from dehydration. He also initiated the Kriya Yoga. Post getting the initiation from Sage Agastya, Mahaavatar Babji moved to the Himalayas. From there, he is believed to have still blessing the people and serving as a guiding factor for all the people who believe in ascending to a newer level and want to initiate Kriya Yoga.

The Shenbaga Devi Amman Temple and the Siddha Caves

It is believed that Sage Agastya lived for many years near the Courtallam falls. There is a small temple called the “Shenbaga Devi Amman Temple”, which is considered as highly mystical. Many people would perform their penance and gain their power. While continuing the journey upon the hills, there are Siddha Caves, an ancient cave complex, which consists of several rooms, where the sadhus reside and practice yoga. It is believed that in the 20th century too, many saints live here and perform severe austerities. The statue of Sage Agastya inside the cave is highly revered by the sages of the Siddha cult. The caves are filled with mystical energy, as it has witnessed a lot of people meditating and gaining spiritual energy.

Sage Agastya’s contribution to literature, astrology, and Yoga is highly commendable. He is revered as the great Siddha, whose powers are unfathomable. He has trained several disciples and is the main reason for establishing the Kriya Yoga. He has set an admirable path to reach spirituality by Yoga rather than taking a path that is filled with several challenges and difficulties. He is one of those saints, whose powers are profound, immeasurable, and have contributed enormously to mankind.