Who is Tripura Sundari?

Tripura Sundari is a Goddess, who symbolizes beauty. She is believed to be sixteen years old and hence is also simply called as Shodasi, the sixteen year old. She is one of the manifestations of Kali, the fierce form of divine Shakti, who is also known in many other names such as Parvati, Durga and Bhagavathi.

Kali is also known as Adi Parashakthi, the primordial, all-powerful feminine energy and is worshipped in ten forms that are known as Dus Mahavidyas, the ten Goddesses of great wisdom. Goddess Tripura Sundari is considered the third of these ten divine aspects.

What is the significance of Goddess Tripura Sundari? 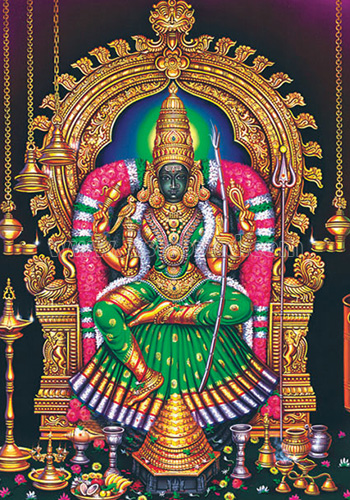 The legend about this Goddess narrates an interesting story. Harassed by the mighty demon Bhandasura, the Devas prayed to the ultimate Godhead, who then manifested as Maha Kameshwara and Lalitha Tripura Sundari. They, then created all the Gods and Goddesses, while Tripura Sundari took on the demon Bhandasura, destroyed him and relived the world of his atrocities. The sacred hymn Lalitha Sahasranamam which speaks of the thousand names of the Goddess narrates this story and sings her great praise.

An young maiden of remarkable beauty, she is depicted as adorned in red silk, and having thick, dark, flower bedecked and flowing hair, a shining face, shimmering cheeks, fish shaped eyes, well laid out rows of teeth and a sweet smile. Such were her good looks that her consort Lord Shiva himself could not take away his eyes from her. She is also depicted as seated royally on a throne with her left foot on the sacred Sri Chakra, holding in her arms, among other weapons, the sugarcane bow and flower arrow, and with motherly compassion in her eyes.

What are the benefits of worshipping Tripura Sundari?

Tripura Sundari is a personification of compassion and grace, as much as she is of beauty. Worshipping her can get for the devotees, her divine blessings and bestow them with a plethora of benefits. They can get relief from problems like delay in marriage, marital problems and disharmony, infertility, poverty, debts and various misfortunes. They can also get protection against the ill effects of planet Mercury.

This Yantra emanates Tripura’s energies, adding a positive tinge to your life and boosts up your love, beauty, joy and happiness.

Goddess Tripura is the ultimate, primordial Shakti, the light of manifestation. She is the garland of letters of the alphabet and said to be the one who gave birth to the three worlds.