Yadagirigutta Temple is also known as Sri Lakshmi Narasimha Temple or Pancha Narasimha Kshetram. This is located in a hillock in Yadagirigutta, at the Yadadri Bhuvanagiri district, Telangana. The presiding deity is Lord Narasimha, an incarnation of Lord Vishnu. This is one of the prominent shrines of Telangana, where the pilgrims visit the temple all through the year.

History and Legend of Yadagirigutta temple: 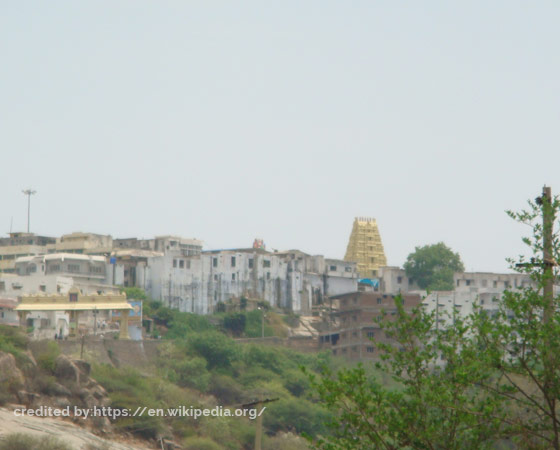 Skanda Purana, a renowned text of Hindu Pantheon has reference to this temple. Sage Yada was the son of Sage Rishyasringa. They performed severe penance to Lord Narasimha. Appeased by the penance, the Lord appeared in five different incarnations such as Jwaalaa Narasimha, Gandabheranda Narasimha, Yogananda Narasimha, Ugra Narasimha, and Lakshmi Narasimha. Sage Yada requested Lord Narasimha to live in the hill and bless the people. Lord Narasimha, accepted his request, and stayed as Lakshmi-Narasimha on the hilltop, with other deities, being carved on the stones at the main cave, and promised to be there till the end of Kali Yuga.

The architecture of Yadagirigutta temple:

The temple was originally in 2 acres, and once after renovation, the shrine encompasses almost 12 acres. The temple is located in a cave, which is about 12 feet high by 30 feet long, Each Narasimha appears in a different way, where Jwala Narasimha is in the shape of a serpent. Yogananda Narasimha appears sitting in meditation in a yoga pose. The silver deities of Lakshmi-Narasimha, are quite outstanding in its appearance and often capture the focus of the spectators. Hanuman temple is located along with the main temple. The long horizontal gap in the rock just below Hanuman is believed to be the location where Gandabheranda Narasimha manifested. The sanctum sanctorum is located under a huge slating rock, which covers half the abode. A new temple has been built near the old shrine and has been renamed as Yadadri by Chinna Jeeyar Swamy, of Vaishnava tradition. The arch at the entrance of this temple depicts five elements of this universe, namely fire, water, sky, and earth. There are several halls, supported by pillars that have intricate designs, and are used for several festivals, and concerts.

The temple follows the Thenkalai tradition of Agama Shastras, of South India. The temple enjoys celebrating several festivals. Ugadi, Maghabahula Ekadasi, is highly venerated with pomp and feisty. The festivals like Phalguna, Karthikamasa, Krishna Jayanti, and Ganesh Chaturthi are also the other festivals that earn good patronage from the people.

Lord Narasimha is a powerful deity, who will protect his devotees from challenges against health, and enemies. Goddess Mahalakshmi, being the deity of opulence, blesses her devotees with wealth and other prosperities.

How to reach Yadagirigutta temple:

The nearest airport is Hyderabad International Airport. It is advised to resort to roadways from the airport to reach the shrine comfortably.

Several buses connect to the temple of Yadagirigutta. There are various other local transports and private transports which are available in plenty.