Thiruvenkadu Temple is a large place of worship in the state of Tamilnadu. While it is dedicated to Lord Shiva, this temple is famous as the sacred place of worship of Budha Graha, the planet Mercury, who is one among the powerful Navagrahas, the nine planets. Thiruvenkadu is a village located in the Nagappattinam district in the southern part of the state. Shiva is enshrined here as Swetaranyeswarar or Thiruvenkaattu Nathar. His consort is Brahma Vidya Nayaki. 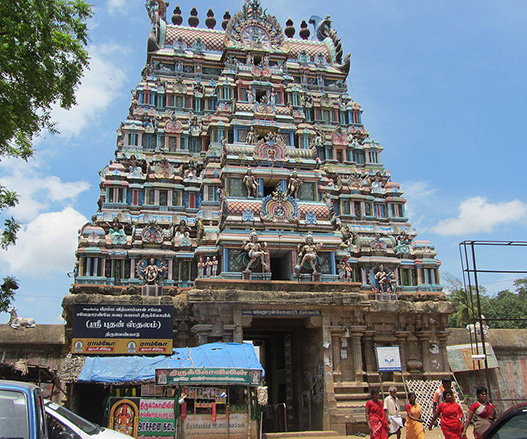 The Sanskrit word ‘Swetha’ means white, which is called ‘Ven(mai)’ in Tamil. ‘Aaranyam’ is forest, known as ‘Kaadu’ in Tamil. Hence, Lord Shiva, who resides in this place referred to as white forest, has come to be called as Swetha Aaranya Eswarar or as Thiru Ven Kaattu Nathar, the Lord of the white forest.

A legend about the temple associates a demon called Maruthuvan, with this place. The Asura obtains many boons from Lord Brahma and begins to harass the Devas and others. When the celestial beings seek refuge in Shiva, he advises them to go and live in disguise in Thiruvenkadu. The Lord then sends Nandi, his mount to take on Maruthuvan and he manages to subdue the demon. But Nandi gets injured in the battle. This infuriates Shiva who then creates Agoramurthy, the fierce form of his own wrath and directs him to punish the Asura. When this Agoramurthy confronts Maruthuvan, the demon immediately surrenders to this mighty form and pleads for mercy. He also beseeches the Lord for the blessing that people worshipping Agoramurthy in Thiruvenkadu will not have any enemies or enmity with anyone. And this Agoramurthy is worshipped with piety in the temple as Agora Veerabhadhra Murthy.

Lord Indra, his mount Airavatha (the white elephant), The Sun God , The Moon God, Agni (The fire God) and Budha, (The Mercury) are some of those who are said to have worshipped the Lord here.

Historical importance of the place

Apart from being a place of religious importance, Thiruvenkadu remains a place of historical significance too. This is the birth place of the great philosopher saint Pattinaththaar, who was born here in Thiruvenkadu carrying the name of Thiruvenkadar. While saints like Meikkandar, who sang the composition Sivagnanabodham and Thiruvenkadu Nangai were also born here, Siruththondar, the Saivite Nayamar, stayed here when he was young.

Important aspects of worship at the Thiruvenkadu temple

This is a very ancient temple which is said to have been referred in the great epic Ramayana. This is also considered as sacred as the holy Varanasi. It is also believed to be one among the 51 Shakthi Peetams, the special places of worship of the mother Goddess.

Thiruvenkadu temple is a sprawling structure, which contains three big tanks inside the precincts. It is well known that Lord Shiva has three eyes and these are considered as Surya, the Sun, Chandra, the Moon and Agni, the fire . The three tanks here represent these three aspects and are known as Surya Theertham, Soma Theertham and Agni Theertham. It is believed that bathing in these sacred waters and worshipping the Lord here can bless one with progeny and other benefits.

While the Linga form of Lord Shiva as Thiruvenkaattu Nathar can be worshipped in the main sanctum and his consort Ambal as Brahma Vidya Nayaki in a separate shrine, the gigantic form of Lord Agora Veerabadhra Murthy occupies a pride of place in this temple and is offered special worship in another shrine.

However, Thiruvenkadu Temple is most well known as a Budha Sthala, the special location for planet Mercury. Budha is a strong and auspicious planet, who represents Buddhi, that is intelligence, and this is the reason for his name itself. Hence he is termed as Buddhi Karaka, the Lord of intelligence. He also denotes various other faculties like knowledge, speech, communication skills etc. Lord Budha can be worshipped in a separate shrine here and it is believed that his blessings can remove dullness of mind, nervous weakness and Putra Dosham, and bestow proficiency in studies, higher education, artistic skills, expertise in music, writing etc.

There are also shrines here for other deities like Nataraja, Muruga, Kali and Durgai. Nataraja is said to have exhibited the Hasti Natanam form of dance here and hence, this place is also known as Aadhi Chidambaram. The Banyan, Vilvam and Golden Shower trees are regarded as the Sthala Vriksham, the sacred trees of the temple.

All the four important Nayanmars, the Saivaite saints Appar, Sundarar, Thirugnanasmabandhar and Manikkavasagar, and also Pattinaththar have sung hymns in praise of this Lord.

If you wish to have customized spiritual tours or pilgrimages arranged in India for yourself or for a group of people, please contact Brindavan Mystic Services at

How to reach Thiruvenkadu Temple?

Thiruvenkadu is well connected by road and is located at a distance of about 13 kms from Sirkazhi town and 24 kms from Myilaaduthurai town, both of which can be reached by train from many places. The nearest airport is in Trichy, which is about 130 kms from Thiruvenkadu.