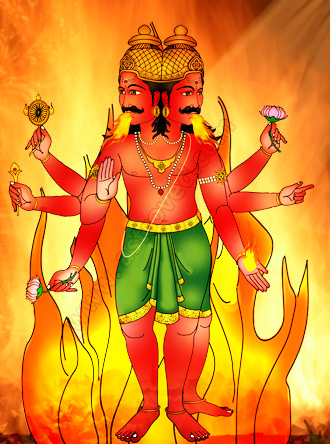 The Sanskrit word Agni means ‘fire’ and the term represents the Fire God. Agni is one of the most important Vedic Gods, who is said to preside over the earth. He is the most referred divinity in the ancient Rig Veda, which has praised him with many hymns and regarded as a supreme deity, along with Vayu, the Wind God, and Surya, the Sun.

This God of Fire is the divine messenger, who accepts the sacrificial offerings on behalf of the Gods. He remains the spark of life, and thus a vital part of all lives. He is Sun’s fire, the stars’ twinkle, and the lightning’s sparkle, and is also the blazing fire, which consumes the offerings to the Gods and also digests the food in people’s stomach. This all-important power is thus revered and worshipped as God Agni.

There are different versions regarding his origin. While, somewhere he is regarded as Indra’s twin brother, who was born with great vigor and full power, some other texts call him as the son of sages Kashyapa and Aditi. He is also said to be the son of sage Angiras and the grandson of Sandila. His wife is Swaha, who is the strength behind his power, and the couple had three sons, Pavak, Pavman and Suchi. Somewhere, Agni is also considered the father of the warrior God Skanda or Karthikeya.

Agni has many forms and his depictions are also as varied as the theories about his origin. He has one to three heads, two to four arms, is red-complexioned with a golden brown hair, and has a halo of flames, which go upwards beyond his crown. He also looks strong and pot-bellied, as he eats almost everything. He is shown to be riding a ram or a chariot drawn by goats or parrots.

There are many legends around Agni, God of fire.

Once, he is said to have offended sage Bhrigu, who cursed him to be ever hungry and be the swallower of everything. Mahabharata speaks about Agni approaching Krishna and Arjuna for appeasing his hunger, and also about his consuming the entire Khandava forest with their help, burning all things down for a full fortnight. Later, Lord Brahma showed mercy and amended the curse, making Agni, the purifier of everything he touched.

Agni also figures in the story, in which, king Shibi is tested by the Fire God, who appears in the form of a pigeon and seeks the king’s refuge, being chased by Lord Indra, in the form of a hawk. Shibi’s compassion is proved when he protects the pigeon and instead, offers his own flesh to the hawk to satisfy its hunger. The pleased Gods then give their blessings to the noble king.

Agni also plays a crucial role in Ramayana. In the great epic, after the war with Ravana was over, Sita had to undergo Agni Pariksha (fire ordeal) to prove her chastity. As she enters the fire, Lord Agni appears in his human form carrying the glowing divine mother, thus proving her impeccable purity to the entire world.

Agni has remained an important medium of worship from time immemorial, and as a part of all traditional rituals associated from birth to death. There were ancient times when the fire was worshipped as a mighty God and prayers were offered to him in the form of Agni Pooja. But subsequently, his place as a primary God of worship declined. However, Agni still wields a unique position in religious traditions.

Agni is essentially considered as a purifying and transformational agent, a form of energy that helps connect with the divine. Fire acts as the bridge between the gross material world and the subtle spiritual dimensions.

Agni is also regarded as the mouth of the Gods and hence is invoked in the homas, the fire rituals, which act as a channel for conveying the offerings to the divinities. Every homa thus remains as a great tribute to Agni, and also as the most evolved spiritual technology.