Surya, the Sun God, is the foremost of the Navagrahas, the nine planets of Hindu astrology. The Sun represents the self and has masculine energy. He is the ruler of the zodiac sign Leo and is the lord of the stars Krittika, Uttaraphalguni, and Uttarashada. He takes a month’s time to navigate through each zodiac sign, and he takes a year to come around all the 12 zodiac signs.

He is known by several names like Mitra, Ravi, Bhanu, Khaga, Pushan, Marichi, Aditya, Savitha, Arka, and Bhaskara. He is also known as Ajan, meaning self-created.

He signifies father, the status of the King - holds power and authority, rules over respiration, mouth, throat, and spleen in a human physique.

Surya, the Sun, is depicted with four hands, holding a lotus flower, a conch, a chakra, a discus and a gada, the mace. He is often portrayed as riding a chariot driven by seven horses. These seven horses represent the seven colors of the rainbow-like red, orange, yellow, green, blue, indigo, and violet. The seven horses are also represented as seven chakra centers in the subtle human body, the seven days of the week. 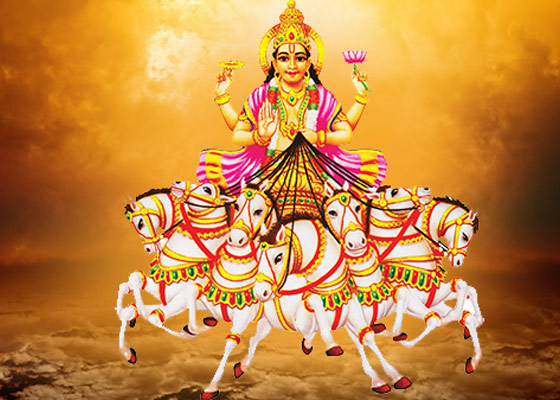 If the Sun is well placed in the natal chart, the native will be bestowed with intelligence, strong will, character, vitality, authority, courage, confidence, and leadership. At the same time, if the Sun is too strongly placed, it will result in pride, ego, and overconfidence, self-centered nature, outshining everyone else, etc. However, a weakly-placed Sun may turn a person into a weak being due to lack of confidence, low self-esteem, meek, will be dominated by others, and will have a lack of energy.

The sacred text of Surya is the Aditya Hridayam Stotram, which is a hymn in glorification and praise of him as the ruler of the universe, remover of all diseases and the repository of peace. This prayer is considered the best amongst the various verses of Surya. Devotees believe that regular chanting of the hymn, will be helpful in washing away of all sins, dispel all doubts, remove worries and sorrows, provide the blessings of complete prosperity.

Festivals like Pongal or Makara Sankranti, Rathasaptami, Chath, and Samba Dasami are the important festivals dedicated to Lord Surya. There are various temples dedicated to the Sun. The most powerful ones are the Suryanar Temple in the Southern part of India and the Konark Sun temple in the northeast part of India.

The day of the week for the Sun God is Sunday, the precious gem is ruby, the most significant flowers are the red lotus, hibiscus, and red oleander, and wheat/ broken wheat is the grain for the Sun.

He is always draped in red color cloth.

In order to gain the blessings of the Sun, one must worship him every day in the morning after having a bath, should look at the direction of the Sun, offer water to him, and pay salutations by chanting his mantras. 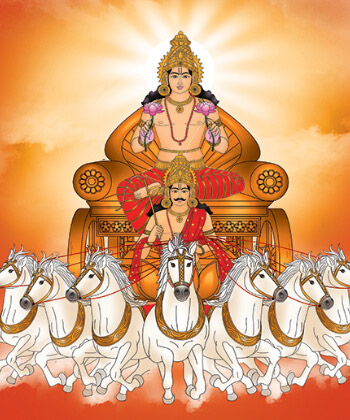 Participate in Surya Pooja to bring success in personal and professional lives.

Participate in Surya Fire lab to enhance your sense of duty, discipline and responsibility.

Keep Surya yantra with you to get relief from depression, despair and mental confusion.