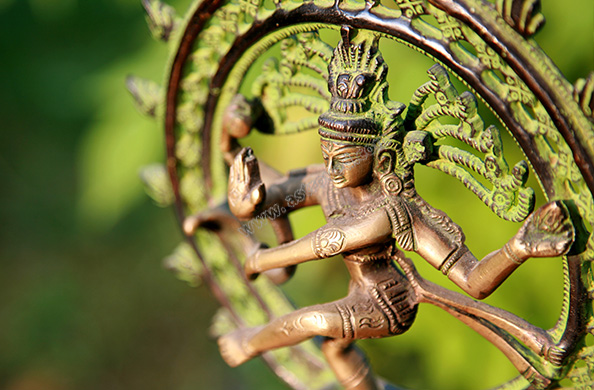 Nataraja is a divine dancer. He is an embodiment of an elegant form of Lord Shiva. ‘Nata’ or ‘Natana’ means ‘dance’ and ‘Raja’ is the ‘king.’ ‘Nataraja’ is thus ‘the king or the lord of dance.’ Shiva is said to undertake Lasya, the form of gentle dance linked with creation, and Thandava, the violent form associated with destruction. Both remain only as two aspects of Lord Shiva’s same nature and are symbolized in his Nataraja form, in which he is said to perform, the Ananda Thandava, the dance of bliss.

Nataraja is depicted in a dancing pose with tresses of long and matted hair, flying out in all directions, showing his ecstasy. He dances with his right leg stamped firmly on a dwarf, called Muyalaka in Tamil, showing victory over demonic forces and his left leg is bent and raised, indicating upliftment. He has four hands, the upper right of which holds Damru, the drum, indicating time and rhythm, and the left holds Agni, the fire, denoting the essence of creation and destruction. His lower right arm, in which a serpent is coiling, is in Abhaya mudra, telling devotees not to fear and assuring them protection, while his lower left arm points to his raised left foot, signifying liberation. The sacred river Ganges is seen in his flying strands of hair, indicating holiness.

Lord Nataraja is believed to do this cosmic dance as a process of creating, maintaining and dissolving the universe, and his form itself is said to symbolize these profound activities. Nataraja dances within an arch of flames, which denotes the great cycle of existence. There is a smile on Nataraja’s face signifying his calmness, amidst his energetic dancing and balancing the forces of the universe.

According to one of the legends, once, there lived some ascetics in the forest called Darukavana or Daruvana. They did intense meditation, austerities, and penance, and obtained immense power. But this made them arrogant; and they began losing their qualities of virtue and indulged in unfair practices. Lord Shiva decided to correct them and bring them back to the right path. He appeared before them in his Nataraja form and began dancing merrily. Considering this as a severe insult to the ascetics, they created a ferocious tiger and directed it to maul the Lord. But, Nataraja simply tamed the animal, skinned it and adorned himself with its hide. Taken aback, they sent a monster of a serpent, which the Lord wore around his neck as a precious ornament. The ascetics then created a deadly demon in the form of a dwarf called Apasmara and unleashed him on Nataraja. The Lord continued his dance, this time stepping on the demon himself and breaking his back. The chastised ascetics realized their mistakes, understood the greatness of the Lord and bowed to Nataraja in total surrender.

Another story speaks about a sage who did penance towards Lord Shiva in Chidambaram, wishing that he should get the feet of a tiger and should also see the Lord’s divine dance. The Lord granted him the wishes and did the cosmic dance in Chidambaram for the sake of the tiger-footed sage Vyaagrapada. There is also a story as per which, Shiva assumed Nataraja form and did the dance to satisfy the wishes of Lord Vishnu and his serpent couch, Adi Sesha.

Nataraja form of Shiva is a very popular deity, worshipped with intense fervor all over the country. The greatest of Nataraja temples is in Chidambaram in Tamil Nadu, which also represents one of the five fundamental elements that make up the universe - the ‘space’. It is believed that the Lord, who represents the core activities of existence, can guide devotees to go beyond the cycle of life and death.

Shiva is believed to have incarnated as Nataraja on a full Moon day in the brilliant star constellation of Arudra (Thiruvadirai), and this day of his advent is observed with immense fervor as Arudra Darshan. This sacred occasion falls in the Tamil month of Margazhi (December-January). Festive celebrations take place in all Shiva temples on this day, and are especially grand in the Chidambaram Nataraja temple, where special Abishekams (hydration ceremonies) and Poojas are conducted throughout the day. A unique offering called ‘Thiruvadirai Kali’ is also distributed to the devotees as Prasad.