Thirunaraiyur Saneeswaran Temple is located in the town of Kumbakonam. It is dedicated to Ramanathaswamy and the Goddess is called by Parvatha Vardhini. As per legend, this Temple was worshipped by Lord Rama, along with Hanuman, while coming back to Ayodhya after his exile. Saturn, or Shani, who is one among the nine plants reside in this temple with his consorts, Manda Devi, and Neela Devi, along with his sons, Manda and Kuligan. Many people consider this temple equal to the famous temple of Rameswaram in terbms of the divine powers since both these temples have Lord Ramanathaswamy as their presiding deities. 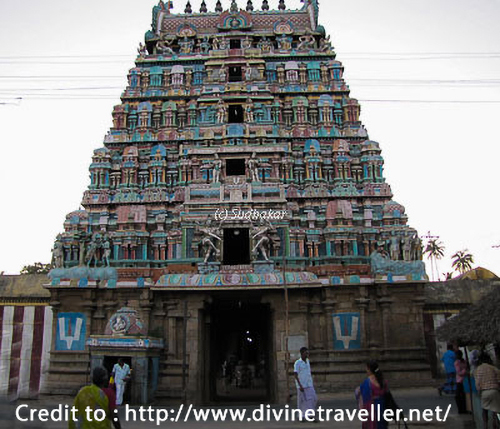 As per the legends, King Dasaratha of the Ikshvaku lineage was ruling the entire world. He was liked by his subjects and was renowned as one of the most liked rulers in the world. Shani (Saturn) had to transit the Rohini star, after his tenure in the Krittika star. Sage Vasishta and other mentors advised the king to stop this transit of Shani, as it will wound bring adverse effects like an extreme drought for every 12 years.

King Dasaratha, to save the people from the calamity, stopped the chariot of Shani. He tried his level best to cease the movement of Shani but was not successful in his mission. So he requested Shani, not to make his transit to Rohini Star, as it would have a greater negative impact on the people, which would cause them to suffer a lot. Moved by the compassion of the King, Shani was overwhelmed towards the love and commitment the king had towards protecting the world. He not only stopped his transit but also granted the boon to the king. He advised the king Dasaratha to have a bath at the sacred tank of Thirunaraiyur Temple tank. King also followed the words of the lord and saved the people from a difficult situation.

The temple is one of the oldest shrines and constructed in South Indian Dravidian architecture. The sanctum sanctorum has Lord Shiva as Ramanathaswami, installed facing the east side. There is a separate shrine for Goddess Parvathavardhini, Lord Ganesha, and Lord Muruga along with his consorts, Valli and Devasena. The temple tank is located inside the temple campus, and all the water required for Poojas is being used from here. The temple campus has huge halls and corridors, which are supported by pillars. The pillars also have intricate carvings and images. The other important shrines that are highly significant are Gajalakshmi, Hanumantha Lingam, Annamalaiyar, brahma, Durga Devi and Chandikeswarar.

The prominent festival of this temple is “Sani Peyarchi”, the transit of the planet Saturn. Other than this, the temple celebrates Diwali, Thai Poosam, Pongal, Karthigai Deepam, Navaratri, and Shivaratri.

Worshipping Saneeswarar is believed to reduce the malefic effects of Saturn. This temple is known as Mangala Saneeswarar temple which means Shani resides here with his family.

How to reach Thirunaraiyur Saneeswaran Temple

The nearest railway station is in the town of Kumbakonam, which is almost 60 kilometers from the temple premises.The temple has good connectivity, and services are available round the clock.

The bus stop is very near to the shrine. State transport, along with private buses gives good connectivity. Other than buses, autos, cabs and private taxis provide excellent connectivity.