Sripuram Golden Temple is a prominent Lakshmi Narayani Temple of South India, which is located in Vellore, Tamil Nadu. It is a temple complex, located inside the Sripuram spiritual park, at Thirumalaikodi. This is 120 kms from Tirupathi and 145 kms from Chennai. The main deity of this temple is Goddess Lakshmi, the Goddess of wealth . This temple is gilded with 1500 kgs of pure gold, which is twice as that of the Golden Temple at Amritsar. 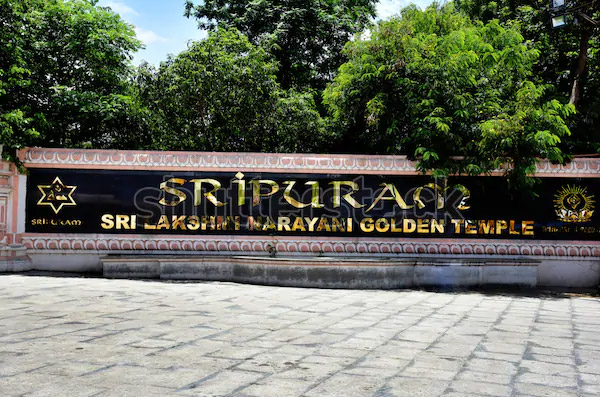 The temple of Sripuram nestles amidst the salubrious environment of Malaikodi foothills. It is a spiritual theme park which helps to build piety and to create awareness about Gods and Goddesses. The temple is known for its splendid architecture and took the efforts of a lot of artisans to build it. This temple was built by Vellore-based charitable trust, Sri Narayani Peetam. Sri Sakthi Amma or 'Narayani Amma' was instrumental in building this temple.

Sri Sakthi Amma was born in the year 1976 and displayed spiritual inclinations right from childhood. When he turned sixteen, he was able to see Goddess Lakshmi in the sky with a conch shell and chakra. He immediately wanted to erect a temple for the Goddess.

This temple is highly splendid and spans over 100 acres. The Vimanam and Ardha Mandapam are covered with pure gold. This temple has a lot of inscriptions from the Vedas. It is built in the shape of a Star, or Sri Chakra, and the shrine of Goddess is placed in the center. One has to read the scriptures while going to the temple, which will enhance their spirituality. The temple complex consists of shrines for Goddess Lakshmi Narayani; Putru Temple or anthill temple; Suyambu temple which is self-manifested. Along with this, the temple has a long corridor and auditorium.

There are several festivals celebrated in this temple. Tamil New Year, Deepavali, Makar Sankranti and Navratri are some of the common festivals. Along with the regular festivals, the temple arranges abhisheka, homa and other rituals for the benefit of their devotees.

Lord Mahalakshmi bestows a lot of wealth for all the people who worship her. Many people with money blockages and financial hurdles will worship her to gain her blessings. This temple is witnessing a lot of devotees who have been blessed by miracles in their life.

How to reach Sripuram Golden Temple

The nearest airport is Chennai, which is nationally and internationally connected. There are numerous modes of local transport from the airport to the temple. The temple also has a helipad inside the complex.

Sripuram is very close to Vellore city, which is well-connected from various parts of Tamil Nadu.

There is a bus stop very near the temple. Apart from buses, there are numerous modes of local transport like autos and taxis which can take one very close to the temple.