Sri Vidya Saraswathi Shani Temple or simply Wargal Saraswathi Temple, is a famous temple located in the Medak district of the Telangana state. It is dedicated to Saraswathi, the Goddess of Vidhya, that is, learning and education. Hence, she is referred to as Vidhya Saraswathi also. This temple complex houses a few other deities too, one of the important among them being Shani Dev, the powerful planet Saturn and hence this temple is also called Sri Vidya Saraswathi Shani Temple. This is one of the few temples dedicated to Goddess Saraswathi in this region and remains highly popular among the devotees. 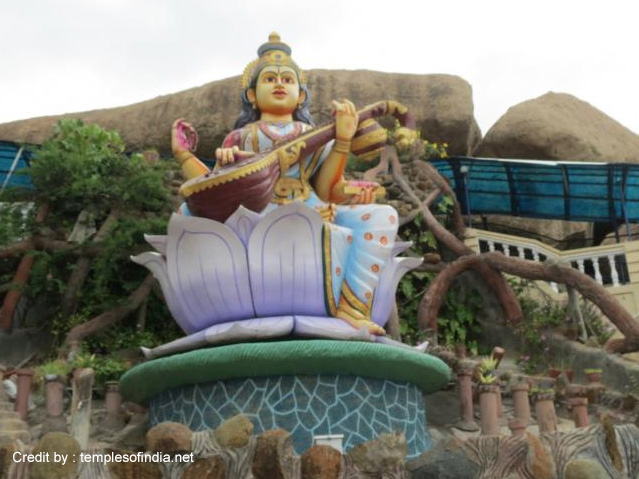 This temple is relatively a recent one, having been built at the end of the 20th century. The inspiration for building this came to one Sri Yamavaram Chandrashekhara Sharma, a great devotee of Goddess Saraswathi. He was a multi-faceted personality, being a scholar, astrologer, Vastu specialist and a businessman. It was under his guidance that a committee known as Satya Patam Seva Samethi initiated the process of erecting this temple. After an intense lookout, they identified the hillock of Wargal, which already contained a few temples including the four century old Shambu Deva temple, as the most suitable place for this temple. With less than Rs 3000/- in their hands, the committee did the Bhoomi Puja and laid the foundation on the Vasantha Panchami day in the year 1989. But with divine blessings, adequate funds kept coming in, so that the temple construction could proceed as planned, without any hitch.

In the year 1992, Sri Vidya Nrusinha Bharati Swamy laid the foundation for installing the holy statues of Goddess Sri Vidya Saraswathi and Lord Shani Dev in the shrines, and the temple was completed and opened for worship in the year 1998. Subsequently, it began to be managed by the Kanchi Sri Shankara Peetam, when a Veda Patashala was started in 1999 and a Lakshmi Ganapathi shrine was constructed in 2001.

Structure of the Temple

Sri Vidya Saraswathi Shani Temple is located on top of the Wargal hillock, in a scenic background that has a valley and unique rock formations around. While the beautiful image of Vidya Saraswathi Devi can be worshipped in the main sanctum, Lord Shani is housed in a separate shrine. The impressive idol of Shani is about 3 feet in height and is said to be the biggest Shani statue in Telangana. Thus, apart from the Vidya Saraswathi temple, the Wargal hill also contains the temples of Shanishwara, Lakshmi Ganapathi, Shambu Deva Shiva and a few dilapidated Vishnu temples in it. The temple also forms part of a sprawling complex, which has more than 13 acres of land on the east, where a library, hospital and a park are planned to be built in future. The Shambu Deva temple nearby is 2 feet below the ground level and the devotees are required to crawl a short distance for worshipping the Shiva Linga form of the Lord. The ancient Vishnu temples in the vicinity are believed to belong to the Kakatya period or even earlier. A big, 30 feet high Vijaya Sthamba, the victory Pillar made of solid rock also stands there, containing the images of Rama, Lakshmana, Sita, Lakshmi and a couple of entwined snakes.

While a huge and remarkable statue of Saraswathi stands in front of the temple, an elevator facility has been made available to reach the hill top, for the benefit of the people who cannot climb the steps.

Goddess Vidya Saraswathi is seated gloriously on a white swan in the sanctum. She has a pleasant smile in her face, has four hands, is seen playing the Veena, and holding a spatik mala and the scriptures. She is also well decorated with a crown, ornaments and garlands. There is the sacred Srichakra below her feet, for which regular Kumkumarchana is done. There are worships right through the day, starting with an Abhishekam at 06:00 in the morning, followed by worships when the devotees can have darshan of her fully decorated form and pray to her. There are many devotees who do the Aksharabhyasam ceremonies also here, through which, they initiate their young children to the world of education.