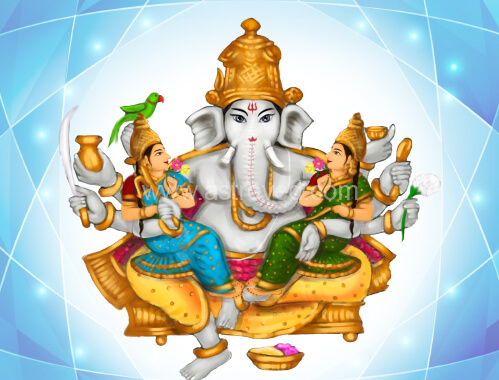 Lakshmi Ganapati is regarded as the 12th among the 32 different forms of Ganapati. ‘Lakshmi’ is the Goddess of wealth, who denotes prosperity and well-being. Here, Lakshmi Ganapati not only represents wealth but also many more blessings. This is a unique form of the Lord, where he is flanked by his two consorts, who are seated on both his thighs, holding white lotus flowers in their hands, and the Lord fondly embraces them. The consorts are Siddhi and Buddhi, who denote achievement and wisdom, respectively. The Lord is also white in color and fair in complexion and is seen with eight hands, the main left of which displays the boon-granting Varada Mudra posture. His other hands possess in them, a sword, a noose, an elephant goad, a Kamandala (water vessel), a green parrot, a pomegranate fruit and a sprig of the wish-fulfilling tree Kalpa Vriksha.

This form of Ganesha can be seen as a painting in the Kerala capital Thiruvananthapuram and as a sculpture in some temples in Mysore region, where all the 32 Ganapati forms are on display. Lakshmi Ganapati can also be worshipped in an idol form, in the famous hill temple of Lord Muruga at Pazhani, in the state of Tamil Nadu.

Star Punarpoosam, also known as Punarvasu is said to be related to this Ganapati.

Lakshmi Ganapati is an important aspect of Lord Ganesha, who is responsible for bestowing both wealth and wisdom. Offering sincere prayers to him daily is believed to endow the devotees with material gains apart from intelligence and prosperity.

The mantra, which reads as under in Sanskrit, hails this Lord as ‘the Ganapati of fortunes’, describes his form and prays for his grace and blessings.