The Ramanaadheswarar Temple is dedicated to Shiva, and the temple lies in Porur, in Chennai city. This is one of the Navagraha temples of Thondai Mandalam around Chennai dedicated to Shiva. In this temple, Shiva is revered as Guru Bhagwan. The temple is located on the road between Porur and Kundrathur. 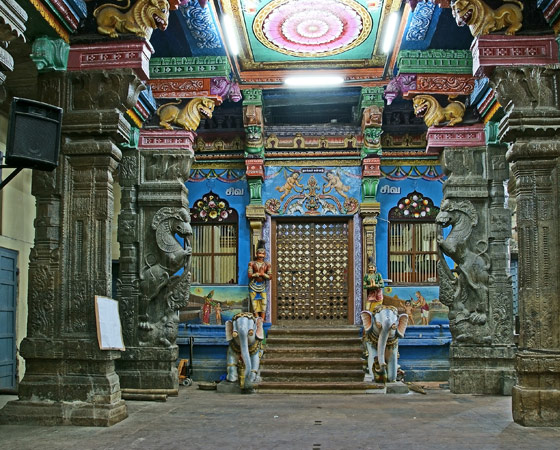 The temple was built in the Chola period by Kulothunga Cholan II, around 700 A.D.

The temple is a Guru Sthalam. The epic Ramayana is associated with this ancient temple. According to legend, Sri Rama rested in this area which was a forest, when he was on his way to Lanka. He rested under an Amla tree. Without knowing there was a Shiva Lingam beneath the ground, his foot unknowingly touched the head of the Lingam. Sri Rama acquired a Dosham for this act, although done without knowledge.

Sri Rama realized what had taken place, and he performed penance for 48 days and had only one Amla fruit for food, to recover from the Dosham and to bring out the Lingam. Shiva was pleased with Sri Rama’s penance and came out of the earth. He gave the Vishwaroopam Darshan to Sri Rama. Goddess Parvati also gave Darshan to Sri Rama as Sivakami Sundari.

Sri Ram was overwhelmed by God’s blessings. He named the Shiva Lingam Ramanaadheswarar and worshipped Shiva. He worshipped Shiva with great reverence as his Guru and received the directions to the place where Mother Sita was kept under Ravana’s custody. He headed towards Lanka.

Sri Rama had worshipped Shiva as his Guru in this region. This place became a Guru Sthalam among the nine Navagraha temples (Thondai Mandalam) around Chennai. Shiva is worshipped here as Guru Bhagwan.

The area Porur received its name when Sri Rama came in search of Mother Sita. He realized the place where Mother Sita was and went on to fight a battle with Ravana (Porrukku Ponathal Porur).

The Ramanaadheswarar temple was built during the Chola period by Kulothungan Cholan II.

The presiding deity is Ramanaadheswarar, and Mother is Sivakami Sundari. The temple faces east with a five-tiered Rajagopuram. The bali peetham and Nandi are found within the Maha Mandapam area. There is no flagstaff.

The sanctum is built in the Gajabrushta shape. In the main sanctum facing east is a large Shiva Lingam called Ramanaadheswarar. The Lingam is Swayambu (self-manifested). There is a huge Trishul (trident) installed near the Lingam. At the entrance of the main sanctum are the two Dwarapalakas, and there is an idol of Ganesha.

Mother is called Sivakami Sundari, and she is placed in a separate shrine facing the south. The shrine lies outside the Maha Mandapam area on the eastern side. Mother is found in a typical standing posture with four arms. There is no separate shrine for Guru Bhagwan in the temple.

Ganesha, Dakshinamoorthy, Vishnu, brahma, and Goddess Durga are the Koshta idols found around the sanctum. The Chandikeswarar idol is slightly removed from the usual location. He is seen near Nandi facing south. On the center ceiling of the Maha Mandapam are the stucco images of the twelve Rashis. The Navagrahas are found with their consorts, which is a rarity.

Kala Bhairavar has a separate shrine within the temple premises. As Sri Rama consecrated this temple, there are a lot of Vaishnava figures in the outer prakaram (corridor) and the Vimanam, which is in the Gajaprashtha style.

Sandana Vijaya Ganapati, Subramanya with his consorts Valli and Deivanai as well as Saneeswarar are found in the outer prakaram.

A small Shiva Lingam is facing the east with Nandi, adjacent to Brahma and Rama Padam (footprint). Brahma is seen under the holy Neem tree on the southern side of the prakaram. Brahma faces north.

The Sthala Vriksham of the temple is the Amla tree.

The temple follows the Vaishnavite tradition of keeping the Sadari on the devotee’s head and giving Theerthem (holy water), a custom which is followed only in Vishnu temples. The practice is being followed here because of Sri Rama’s devotion to Shiva. This is one of the few Shiva temples following this tradition.

Benefits of Worshipping at Ramanaadheswarar Temple

How to Reach Ramanaadheswarar Temple

The closest airport is the Chennai Airport, which lies 12 kilometers away from the temple.

The closest railway station to the temple is the Guindy Railway Station, which lies 8 kilometers away.

The Porur Junction is located 1 kilometer away from the temple.