The main attraction here is the temple tower or Gopura, near the main entrance of this temple which is almost 108 feet high. Many people feel the mystic vibrations and feel that their problems and challenges are solved by the mystic forces of the Goddess. where the rays of the sun fall directly on Devi’s forehead and travel down to her feet, on March 23rd. Often referred to as Swetha Kshetra, this temple is one of the iconic places of Bangalore, which attracts a lot of devotees across the globe. 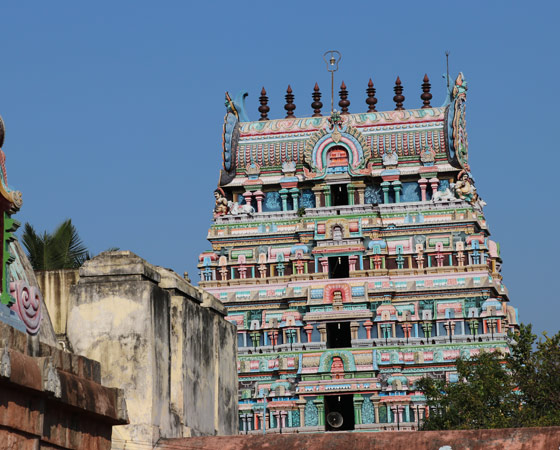 This temple holds a lot of importance and has several legends attached to it. It is a place where lots of saints have attained salvation by praying to the holy Goddess. It is also believed that Sage Athreya and his wife Anusuya lived in this place, where the current shrine is located. The temple was built by a sage called Sri Tiruchi Mahaswamigal in the year 1960. He had a dream, where he saw three Goddesses, and a voice instructed him to go to South India, and construct a big temple. To his surprise, he saw two eagles also escorted him to show him the exact location. Along with the temple, the Sage also constructed several schools and Mutts and helped the people.

The temple is built in the Dravidian style of architecture. It has five Rajagopuras or temple towers. The idol of Goddess Sri Raja Rajeshwari is almost six feet tall and is highly iconic, which is also worshipped as Goddess Sri Jnanakshi. It is built in pure granite stones. The temple has a good Sanctum Sanctorum, elevated halls, and courtyard which is highly artistic. The temple is built in a huge complex and has separate shrines for Lord Ganesha and other Goddesses. The intricate carvings on the temple are highly notable.

There are several festivals celebrated here. This is one of the hubs of Bangaloreans, where all the religious activities take prominence, where the temple regularly arranges for cultural fests like dance, music and Bajans.  Fridays are special here, where the devotees would flock to submit their prayers. Goddess Parvathy is decorated with vegetables called “Tarkari Alangara”. Durgashtami and Navratri are celebrated with pomp and valor. Other festivals of this temple are Deepavali and Ugadi, which is the Karnataka New year.

This one of the temples which is renowned by Bangaloreans, and even attracts people from all parts of the world. Fridays and Tuesdays are very special, and worshipping the Goddess on these enhances the mystical powers. Chandi Homa is performed with great reverence. Festivals like Brahmarathotsava and the Navratri festival are highly famous here. Rathotsavas are celebrated annually. Nine days of Navarathri is highly famous.

How to reach Sri Rajarajeshwari Temple:

The nearest railway station is Nayandalli Railway Station. From there, taking a private vehicle like an auto or a taxi is preferable.

Bangalore is well connected by bus across all parts of India. Apart from government busses, there are a lot of private taxis, cabs, and autos which connect across Bangalore.