The mention of the term ‘Golden Temple’ may generally make many relate to the ancient Gurudwara, the Harmandir Sahib at Amritsar, in the North Indian state of Punjab. But it does have a counterpart of relatively recent origin at the historic city of Vellore, in the Southern state of Tamil Nadu. While the Amritsar Golden Temple is a sacred Sikh shrine, the Vellore Golden Temple is a Hindu place of worship dedicated to Lakshmi, the Goddess of Wealth and the divine consort of Vishnu, the supreme God of protection. She is worshipped in this grand temple as Sri Lakshmi Narayani.

This is a temple covered in gold, and that is the main reason for its name and fame as the ‘Golden Temple.’ The temple is also known as Sri Lakshmi Narayani Temple. The temple lies in Thirumalaikodi, or Malaikodi, about 8 kilometers away from Vellore city. It forms part of the Sripuram spiritual park, which lies at the foot of a small range of green hills. 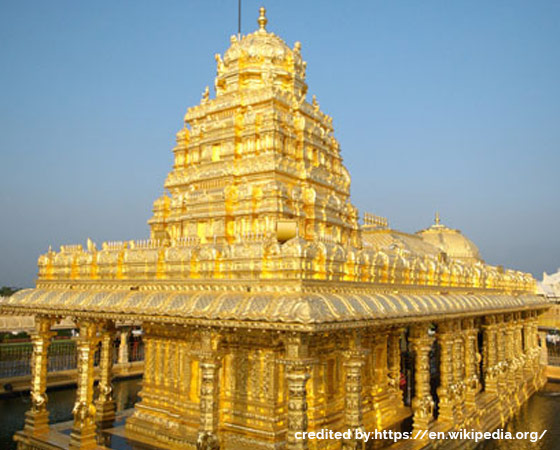 The Vellore Golden Temple complex is spread across a large area of 100 acres and looks picturesque with some small but green hill ranges forming its backdrop. The temple was initiated by the efforts of Sri Sakthi Amma, a spiritual leader, who resides at the Sri Narayani Peedam, a spiritual center in the remote village of Thirumalaikodi, founded in 1995.

The Golden Temple was consecrated in August 2007, when its Maha Kumbabhishekam was performed. On the opposite side of the Golden Temple across the road, is a thatched roof hut housing the Swayambhu Narayani.

Goddess Lakshmi is also called ‘Sri,’ and so her abode here has come to be known as Sri Puram. Hence this unique place of worship is popularly known as both the Vellore Golden Temple and the Sri Puram Golden Temple.

Vellore is a historic town. The grand Vellore Fort and the ancient Jalakandeswarar temple located in it bear testimony to the place of pride that the town occupies in the Indian historical map.

This temple and the entire complex have been constructed by Narayani Peedam, a charitable trust based at Vellore. This trust is headed by Sri Sakthi Amma or Narayani Amma, its spiritual leader.

The specialty of the Golden Temple is that it is true to its name. The temple is as exquisite and fabulous, as it is unique and awe-inspiring. The temple has been built on Vastu. The temple is gilded, that is, covered with pure gold weighing as many as 1500 kilograms. This works out to double the weight of gold used in the more famous Amritsar Golden temple, whose dome is gilded with 750-kilo grams of gold.

In this temple, the Vimanam, the tower above the main sanctum, which houses the beautiful idol of Goddess Lakshmi Narayani, the main deity and the Ardha Mandapam, the hall immediately adjacent to it, are covered entirely with pure gold. The Mandapam and two artificial fountains greet devotees. The copper base, the many layers of gold coatings on it, and the manually carved artistic designs and sculptures have all contributed to give the temple structure, an exotic and luxurious look.

The sculptures and other intricate carvings, done with gold, have been designed by artisans, specialized in using the yellow metal in the temple art forms. The task included converting bars of solid gold into many gold foils and then mounting these on copper. This way, as many as 9 or 10 layers of gold foils have been set on sheets or plates of copper. That this entire work using as many as 1500 kilograms of gold was done manually, makes it more elegant and amazing. Here it is said that the temple art put into use here has immense Vedic significance too.

The temple complex also consists of a star-shaped pathway that one must cover to approach the main shrine and absorbs a lot of positive energy from nature. This pathway, more than 1.8 kilometers in length, represents Sri Chakra, the powerful spiritual symbol, and is laid amidst a lush green landscape. As the devotees traverse this path on foot to have the holy darshan of the main deity, they get to read many valuables messages provided all along the way. These messages highlight the fact that human birth itself is a divine gift and lay stress on the significance of spirituality in one’s life.

Apart from the two pathways for entry and exit, there are eighteen entrances behind the temple that reflect the eighteen characters of the human mind. The temple looks like a Sri Chakra when viewed from the top. There is a 27-feet tall, 10-tiered traditional lamp opposite the shrine of the main deity and is made of Panchaloka, an alloy of five metals, and has space for lighting thousand lamps.

There are idols of Goddesses Durga, Lakshmi and Saraswathi in the temple meadows.

While the Goddess of wealth and prosperity Lakshmi as Sri Lakshmi Narayani can fill your heart with devotion and contentment, this grand temple virtually glittering in gold, can remain a feast to your aesthetic sensibilities. The temple is surrounded by lush greenery, adding peace and natural beauty to the ambiance. The temple is a source of tranquility and aims to make people reach into their higher selves.

There is a tank around the temple with ten feet depth of water.

The Sahasra Deepam or the one thousand and eight lamps that are lit is a ritual performed in the Golden Temple every morning and every evening. The devotees offer Abishekam (sacred wash) to the deity and offer Vastras (clothes). The temple feeds all devotees at mid-day and night.

The Mother Goddess Lakshmi Narayani is a Swayambhu (self-manifested). She is the principal Goddess of wealth and prosperity. The main deity is beautifully adorned with precious jewelry and a crown of precious gems. Devotees who pray with devotion are blessed with boons of prosperity.

The Sri Lakshmi Narayani Temple is built along similar facets of Sri Venkatachalapathy of Tirupati Temple. It was hence called Thirumalaikodi earlier on. After completion of the temple construction, the region was called Sri Puram. It is considered very auspicious for the devotees to complete their pilgrimage to the Tirupati temple with a visit to the Sri Puram Sri Lakshmi Narayani Temple.

How to Reach Golden Temple Vellore

The nearest airport is the Tirupati Airport, which lies 98 kilometers away from the temple.

The nearest railway station is the Vellore-Katpadi Railway Junction, which lies 15 kilometers away from the temple.

The Vellore Bus Stand is located 8 kilometers away from the temple.