Anegudde – The Abode of Lord Vinayaka

This is a Siddhi Vinayaka Temple located at the small village of Anegudde, in the Udupi district of Karnataka. The Kannada word Anegudde literally means, ‘an elephant hill’ and the temple is actually located at the top of a small hill. This place is also known as Kumbhasi. 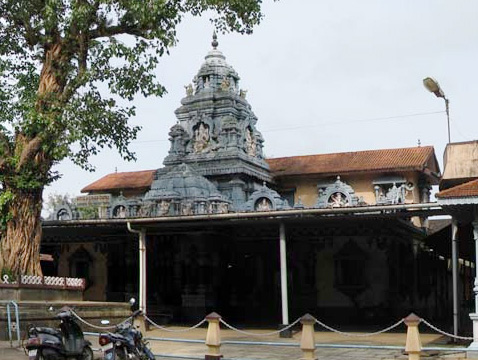 The name of the place Kumbhasi, reflects its association with a mythological story. It is the legend regarding a demon called Kumbhasura who lived in this area. It is said that once, sage Agastya was performing a yagya, a sacrifice in this place for the prosperity of this region and the welfare of the people living here. But demon Kumbhasura was angry at the conduct of the ritual as it will be against his interest. Hence he began to trouble the sages and create impediments in the smooth performance of the sacrifice, so that it cannot be completed. It was then that the mighty warrior Bheem, who is one among the well-known Pandava brothers, came to their rescue. He is said to have prayed to Lord Ganesha here, obtained a powerful sword, fought with it against the demon and destroyed him ultimately. The sages and the people were all overjoyed and began offering prayers to Vinayaka for the great help. The yagya too could be completed successfully and as a result, there was all round welfare and prosperity in this region. Hence this place came to be known as Kumbhasi and the Vinayaka began to be hailed as the great benefactor.

Anegudde is a sacred place, that is believed to be a Mukthi Sthala, the place of liberation. This is regarded as nothing but the gift of Vinayaka to the world. Here, Lord Siddhi Vinayaka is enshrined in the main sanctum. He is in a standing position and is having four hands. Two of his hands are in the boon giving Varadha Mudra posture, while the other two point downwards, denoting salvation. The idol looks majestic, adorned with a bright silver armour. There are many old scriptures available in the temple, which narrate stories from ancient Puranas.

Thulabaram, that is, weighing of the devotees against various edible items in a large scale, is a famous ritual here that is done as a form of special worship. Devotees offer items like coconut, rice, sugar, jaggery etc. to the Lord by performing this ritual. Homas and yagyas like Rangpuja and Ganahoma are also done by the devout. There is a strong belief that the Lord here is quite compassionate and that he will definitely answer sincere prayers.

Devotees in large numbers offer worship in this temple throughout the year. Vinayaka Chaturthi is celebrated here with great religious fervor and enthusiasm. This falls during the Hindu month of Bhadrapada, which corresponds to the Tamil month of Avani (August-September). This is a pious occasion when thousands of people come to this temple seeking the Lord’s blessings. Also Rathothsava, the chariot festival of the Lord that is held here during the month of December, also remains as a grand celebration. Mouth-watering Prasad is also distributed to all those assembled there on that occasion.

Location of this Temple and How to reach it?

Anegudde, which is in the Udupi district in Karnataka state, is about 30 kms from Udupi town and 9 kms from the nearest town of Kundapur. This Kundapur has rail connectivity with many other stations nearby. The nearest city is Mangalore, which is 96 kms away and it can be reached by air, train and bus. While some people come by train to Kundapur and take the road to Anegudde, many travel by road to the temple straight from Mangalore.