Introduction about the Mansa Devi Temple

The Manasa Devi Temple is a Hindu pilgrimage center in the holy city of Haridwar in Uttarkhand, India. Located atop the Bilwa Parvat on the Shivalik Hills, the southern mountain chain of the Himalayas, the shrine is one of the Panch Tirth (Five Pilgrimage) centers of Haridwar. It is dedicated to Goddess Mansa Devi, a form of Shakti, who is believed to have emerged from the conscious mind of Lord Shiva. Many consider her as the brain child of the ancient Sage Kashyap who is said to have conjured her with the power of his intellect. She is also said to be the sister of the Naga Serpent Vasuki. Two deities take pride of place within the Sanctum Sanctorum, one with eight arms and the other with three heads and five arms. This holy shrine is one of the three Siddha Peethas in Haridwar, along with the Chandi Devi Temple and the Maya Devi Temple. The deity is considered so powerful, that people from all over the country and the world flock to the temple to worship the Devi. 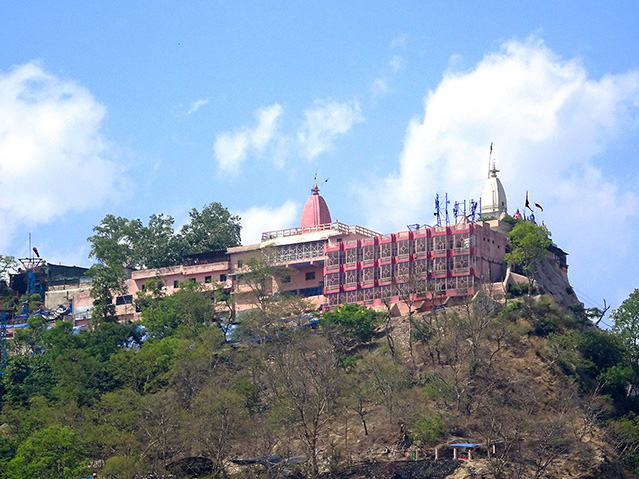 History of the Mansa Devi Temple

The Manasa Devi temple has ancient origins and it is difficult to ascertain the exact date of establishment. Many legends associate the temple with the origins of the city of Haridwar which means the Gateway to the Lord and is one of the most sacred places in India. The city is said to be one of the four places where the drops of the elixir of Immortality (Amrita) spilled when it was being transported by the celestial bird Garuda.

Significance of the Mansa Devi Temple

Visitors to the temple follow a unique custom which entails tying threads on a holy tree located in the vicinity of the temple. This is carried out to ensure the fulfillment of wishes and upon realizing their desires, people come to untie the thread from the same tree. This is of great significance to Hindus who observe this ritual with great devotion and a pure state of mind.

Architecture of the Mansa Devi Temple

The Manasa Devi Temple in Haridwar is built in the North Indian traditional style of architecture with a Shivalik background. An old trekking route leads to the temple and there are a total of 786 stairs which can be easily climbed. One can also avail the cable car service which was introduced for the benefit of pilgrims also going to the nearby Chandi Devi Shrine.

Thousands of devotees from various parts of the country and all over the world visit the temple every year, especially during the Navratra and Kumbh Mela in Haridwar. The entire area is a beehive of activity during this period and throbs with the vivacity of the festive season. This fervor extends to all the nearby temples also, which observe the same festivals with equal gusto.

Benefits or Blessings of the primary deity- Mansa Devi Temple

Goddess Manasa Devi fulfills the ‘Manoutis’ (wishes) of devotees who pray to her with a clean and pure heart. Pilgrims throng the temple to offer prayers to this Divine form of Shakti and take her blessings. She is renowned for wish fulfillment and keeps her worshippers happy at all times. Her power and effulgence are unlimited and people come to worship her throughout the year.

Location – How to reach the Mansa Devi Temple

The temple is open from 6.00 am to 8.00 pm; and the Aarti is conducted at 5.30 am. Haridwar is one of most prominent religious and spiritual centers in the country and easily accessible.

By Air: The nearest Airport is in Dehradun, about 45 km from the temple.

By Train: The Haridwar Railway Station is less than one km away from the temple.

By Bus: Haridwar is well connected by bus service to and from all neighboring towns and cities.

Local Transport: Taxis, buses and three wheelers are available to take one to the temple from various points in the city.