Introduction about the Eklingji Temple

The Eklingji temple is a Hindu religious shrine located in the state of Rajasthan, India. The principal deity is Lord Shiva, one among the holy trinity in the Hindu pantheon, along with Brahma and Vishnu. Considered to be the ruling deity of the princely state of Mewar, the Ruler governs the state as his Dewan. The shrine houses a four-faced Image of Lord Shiva in black marble, reaching a staggering height of around 50 feet. The four faces are said to depict the four forms of Shiva as Surya, Brahma, Vishnu and Rudra. This multifaceted idol is referred to as ‘Yantra’ which stands for the ultimate reality. The Shivlinga is garlanded by a silver snake which forms the major attraction of the temple. This magnificent temple is a major pilgrimage and tourist center which attracts visitors from all over the country and the world. 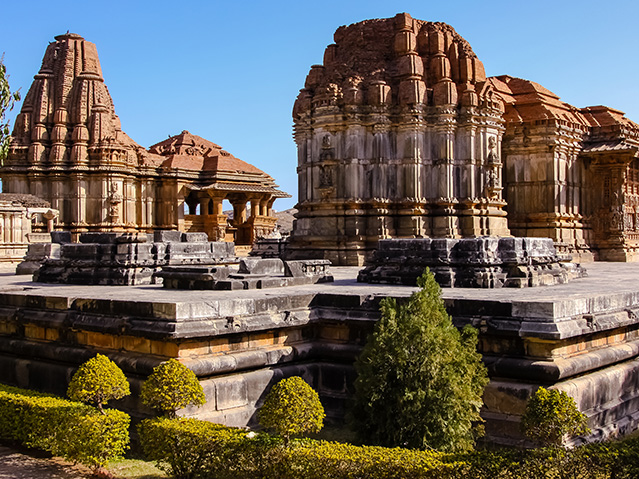 History of the Eklingji Temple

The temple is initially believed to have been built in 734 A.D by Bappa Rawal. It was ravaged by marauding Muslim invaders who plundered and defaced the temple. It was subsequently repaired and modified by various Hindu rulers who spared no effort in cleansing the temple of any traces of the invaders. Construction work on the present structure is said to have begun in 971 A.D by the Guhila dynasty of Mewar as a tribute to their presideing deity Eklingji, a form of Lord Shiva.

Significance of the Eklingji Temple

The Shri Eklingji shrine belongs to the Maharanas and is not a public temple. The Pujas and rituals are performed in the royal way and according to tradition, only the Maharana of Mewar can perform the Puja to the deity. However, the daily Pujas are performed by Pujaris on behalf of the Maharana, with all the expenses being met by the Maharana. Gifts and monetary donations are discouraged, but if any one does so, it is utilized for other religious and charitable purposes. Lord Eklingji is the Kuldevta of many Brahmin communities originating from Mewar and Gujarat region.

Architecture of the Eklingji Temple

This ancient temple is built entirely of white marble and situated on a sprawling campus which houses as many as 72 holy spots such as Samadhis, muth and temples. The magnificent Shikhar is 50 feet high, with a circumference of 60 feet. The architectural style of the Eklingji temple is unique and the structure is a marvel of construction. The building is comprised of two storeys with an impressive pyramidal roof and strikingly beautiful carved tower. The enormous pillared hall inside the complex is strikingly conspicuous. A magnificent silver Image of Nandi the bull welcomes visitors to the hall. Two other images of Nandi carved in black stone and brass are also housed in the temple complex. The Shivlinga is located in the center of the shrine and encircled by images of Goddess Parvati, Lord Ganesh and Lord karthikeya. The sanctum has four doors facing all the directions and the door steps are embedded with precious stones. Statues of Goddess Saraswati and Goddess Yamuna are also found within the temple grounds. The Lalkush temple built in 971 A.D is also situated within the temple complex and is reportedly the only one of its kind in the country. The heavy silver doors leading to the main temple depict Images of Ganesh and Kartikeya. Two tanks are also found inside the temple and the water is used in the service of the Lord. A staggering 108 shrines are situated within the complex and it is encircled by long walls of hard rock.

Benefits or Blessings of the primary deity- Eklingji Temple

Those who pray to Lord Shiva are considered redeemed of their sins and devotees seek his blessings to overcome hardships & distress. Lord Shiva is considered the Ultimate Reality and does not disappoint those who worship him. People from far & wide frequent the temple to get a glimpse of the Lord and be delivered from their deprivation.

Location – How to reach the Eklingji Temple

The Eklingji Temple is a famous shrine and located in the town of Eklingji (Kailashpuri), in the state of Rajasthan. It is about 22 kms from Udaipur and linked by National Highway No. 8. One can catch a bus or taxi from Udaipur to reach the temple.

By Air: The nearest Airport is in Udaipur, approximately 22 kms away.

By Train: The Railway Station in Udaipur is the closest to Eklingji temple.

By Bus: Several buses ply to and from neighboring towns and cities of Udaipur.