Introduction about the Mukteswara Temple

The Mukteshvara Temple is a sacred Hindu temple located in the city of Bhubaneshwar in the eastern Indian state of present day Odisha. The shrine is dedicated to Lord Shiva , one of the Gods in the holy trinity of Hinduism, along with Vishnu and Brahma. This ancient shrine dates back to the early 10th century and a vital constituent in the study of the evolution of Indian temples constructed during that period. This style of temple construction is believed to have continued for almost a hundred years, with many other shrines built in the same manner and design. The Rajarani temple and Lingaraj temple, both located in Bhubaneshwar are typical examples of this genre. Forming one of the major tourist attractions of the city, the Mukteshvara temple is visited by scores of people from India and all over the world. 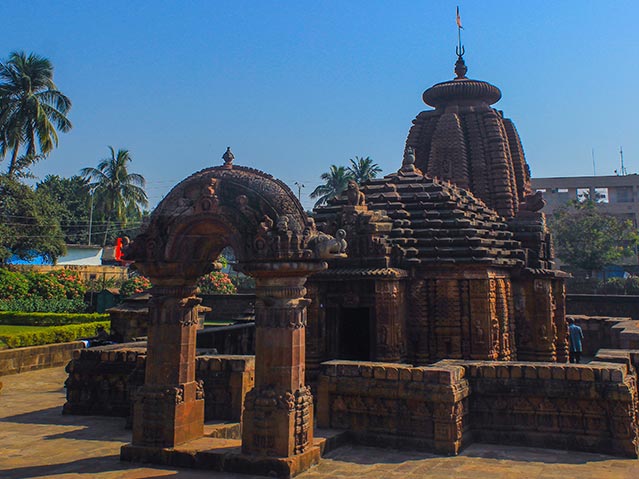 History of the Mukteswara Temple

The temple is thought to have originated from the Somavamshi Period and most historians concur that it was probably built sometime after the Parashurameshvara Temple, but earlier to the Brahmeswara Temple, which was built in 1060 A.D. The exact year of construction is hard to estimate, but it is believed to be sometime around 950 A.D. It is also strongly believed the structure spawned a new culture in building style, which influenced several temples built during that era.

Significance of the Mukteswara Temple

A significant and unique feature of this temple is the presence of a ‘Torana’ which is not seen earlier in any other structure. The presence of a number of sculptures of skeletal ascetics in teaching and meditative poses indicates the temple could have been involved in the Tantric style of worship. The external compound wall has several niches of various Hindu deities like Goddess Saraswati, Lord Ganesha and Lakulisha.

The arched gateway is a truly unique feature of the shrine and indicates the influence of Buddhist architecture. The thick pillars of this gateway are exquisitely carved and portray figures of women adorned with beads and other ornaments.

The square Vimana is built on a raised platform with rectangular columns. The Shikara is sculpted in several patterns and has four Natarajas and four kirthimukhas on the four faces. It is believed a new form of decoration was developed here which later reflected in the building of other temples in Odisha.

The cubical Sanctum of the temple is replete with sculptures of beautiful maidens exhibiting their charms and accompanied by nagas and naginis.

This magnificent 10 the century temple, though small and compact, is decorated with intricate carvings sculpted by master craftsmen. The Jaganmohana has a steeped pyramidal roof and the red sandstone used in the construction of the temple abounds with carvings of sadhus and beautiful women. There are also several other carved images on the structure.

The image of Ketu with three hooded snakes is carved on the doorway of the inner Sanctum. There is also a well and a tank located within the temple precincts. Several other shrines are located within the complex which houses a Lingam. The low compound wall keeps in line with the contours of the temple and there are beautiful sculptures inside and outside the temple.

Architecture of the Mukteswara Temple

The Mukteshvara Temple is a masterpiece of architecture and considered one of the finest examples of Odisha architecture. The west facing shrine is in the lower basement and accompanied by several other shrines. The octagonal compound wall surrounding the temple is covered with elaborate carvings. The complex has a Torana, Vimana, Jaganmohana and a Sanctum, which are considered the distinctive features. This magnificent technique of construction was replicated by several other temples which adopted the same unique Pithadeula style.

A three–day dance extravaganza is organized annually by the Department of Tourism of the state government. This is held in the temple premises and called Mukteswar Dance Festival. Accompanied by musical instruments like ‘Mardal’, the various facets of the classical Odisha style of dance called Odissi are incorporated into this festival which features popular Odissi dancers.

Benefits or Blessings of the primary deity- Mukteswara Temple

It is said that women taking a dip in the tank or well within the temple premises are endowed with male progeny. Even barren women are blessed with child if they take a dip the night before the Ashokashtami car festival. The water from the holy tank is available for sale in the evening.

Location – How to reach the Mukteswara Temple

Bhubaneshwar is the capital city of Odisha and accessible by various modes of transport.

By Air: The Biju Patnail Airport is around 2 Km away.

By Train: The Bhubaneshwar Railway Station is around 5 km away.

By Bus: Bhuabaneshwar is well connected with neighboring towns and cities by bus service.