Introduction about the Mahabodhi Temple

The Mahabodhi Temple is a sacred Buddhist shrine located in Bodhgaya in the state of Bihar, India. This holy place is a much sought after pilgrim and tourist destination and revered as the spot where Buddha attained enlightenment. The site is said to contain the descendant of the same Bodhi Tree under which Buddha was seated in his endeavor to envision the true meaning of existence. Several depictions of various Hindu and Vedic deities are also associated with this place. Today, it is recognized as a UNESCO World Heritage Site and renowned internationally. Visitors from all over India and the world flock to this historical and religious center to witness its breathtaking beauty and architectural splendor. 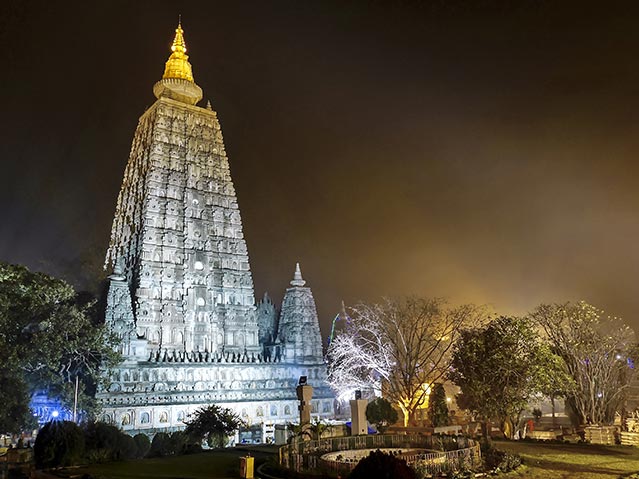 History of the Mahabodhi Temple

The great Buddhist Emperor Ashoka visited Bodh Gaya in 250 B. C to establish a monastery and shrine on the spot where Buddha was enlightened. He installed a magnificent Diamond throne to commemorate the very spot where Buddha is said to have sat on. Several artifacts dating back to that period still exist in the present site.

The current structure dates back to the 5th- 6th century and many Burmese rulers restored and renovated the temple during the 11th to the 19th century. It was during the 1880s that the British Government began to restore the temple and several prominent historians of that era inspected the temple to ascertain its condition. In 1891, Buddhist leaders from Sri Lanka visited the temple and declared Bodh Gaya as a holy Buddhist site. In 1949, the affairs of the temple were taken over by the Bihar Government and subsequently a Bodh Gaya Temple Management Committee was constituted to handle the management. From 2013 onwards, non-Hindus were allowed to head the temple honoring an amendment passed by the Bihar Government.

Significance of the Mahabodhi Temple

Bodh Gaya is considered as the most sacred place for Buddhists and deemed to survive for posterity, even if major catastrophic events destroy the world. With due approval from the Archaeological Survey of India, the upper portion of the temple was covered with gold in 2013 as a gift from the King of Thailand.

Several prominent personalities including the present Prime Minister of India Shri Narendra Modi have visited the temple and offered prayers.

Architecture of the Mahabodhi Temple

Stone railings about two meters high surround the entire temple complex and display a distinctive style and design. Some older structures made of sandstone date back to as early as 150 BC and some made of unpolished granite are said to date back to the Gupta period.

Several festivals are celebrated by the Mahabodhi temple including Buddha Jayanti, Kathina Civra Dana, Ambedkar Jayanti, Monlam Puja & Peace ceremony and Bauddha Mahotsava.  Circumambulating the Mahabodhi Stupa is also considered as the sacred duty of all Buddhists and should be carried out with due respect. People from all over India and the world travel here to attend the ceremonies and participate in the proceedings.

Location – How to reach the Mahabodhi Temple

Air: The nearest airport is at Gaya which is 7 Kms away.

Rail: The closest railway station is Gaya which is 17 kms away.

Road: Bodhgaya is well connected by road to all neighboring towns and cities.

Local Transport: One can take a taxi, tonga (horse drawn cart), auto rickshaw and cycle rickshaw to reach the temple.

Bus: Regular buses ply from all neighboring towns and cities to Bodh Gaya.