Who is Buddha and what is his significance?

Buddha is one of the great saints of India. The word Buddha means ‘The Awakened or Enlightened one’. Born a crown prince, he sacrificed the comforts of a royal life and turned into an ascetic. As he got enlightened and began preaching and serving people, he began to be called simply, as Buddha. He founded a monastic order, which in course of time became a great religion called Buddhism, after his name.

What is the History and Mythology associated with Lord Buddha? 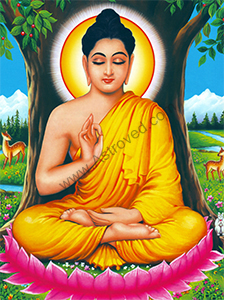 Buddha was believed to be born on a Full Moon day in the year 563 BC and the day is observed reverentially as Buddha Purnima. He was born as Siddartha to Suddodhana, the king of Kapilavastu and his queen, Maya Devi, in the present day Lumbini in Nepal. He was the crown price and lived a royal life. It is said that a seer had predicted then that Siddartha will become a great man, whom people will admire and worship, but it is very likely that he will be an ascetic. The king got alarmed, and with a view to prevent philosophical ideas arising in his mind, he ensured that his son is brought up in a protected atmosphere, with all princely comforts. The young man thus grew up within the palace, knowing only about happiness, laughter and luxury, and not anything about the realities of the outside world. He was also married at a young age to a beautiful princess Yashodhara and the young couple was blessed with a handsome baby son, Rahul.

But the inevitable was just waiting to happen. Driven by an urge to see the world around, he secretly ventured out one day in his chariot. There he saw an old man, and with his body shrunk and incapacitated, he was simply crawling, unable to even walk. Shocked by the sight, the prince drove out on subsequent days too, when he encountered a sick man, being attended to and then a dead body, being carried for cremation. Deeply disturbed by the cruel realities of the worldly life, he went out the next day too, when he saw a monk wearing only a loincloth and nothing in his possession, moving around merrily, with peace and joy.

Seeing for himself and realizing that worldly possessions are simply transient and that they cannot provide true joy, Siddartha left his wife, son and all the princely comforts, and walked out of the palace all alone, in the darkness of the night. He was merely 29 at that time. He wandered around as an ascetic, denying himself even the basic comforts of life and surviving only on a few basic necessities of existence, seeking answers for the fundamental questions tormenting him, like birth, old age, sickness, sorrow and death. After undergoing many trials and tribulations, and days of contemplations and meditations, enlightenment dawned on him. It was under a Pipal tree, known now as the Bodhi tree, in the present day Bodh Gaya in the state of Bihar, India that he found the answers regarding the ultimate truth of existence. It was on Buddha Purnima day, that Siddartha blossomed into Buddha, the great realized soul. And he was just 35 then.

Buddha continued his mission of teaching and serving humanity and attained Mukthi or liberation, in 483 BC, at the age of 80. 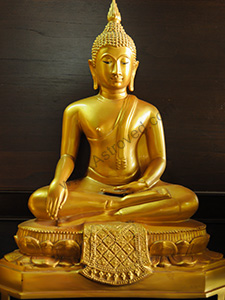 What was Buddha’s contribution to humanity?

Buddha Dev began sharing his spiritual knowledge and wisdom with the masses. As a wandering monk and mendicant, he travelled far and wide, meeting people and giving them sermons. Declaring that desire is the root of all sorrow, he taught them how to end human sorrow, and preached love, kindness and compassion towards all beings. People were deeply moved by his teachings and began following him in very large numbers. His teachings influenced both the kings and the commoners alike, and soon, gave rise to a new and popular religion, Buddhism, which spread even to the lands beyond the shores of India.

How is Lord Buddha worshipped?

People regard Buddha as a Divine being and hold him as an incarnation of God. Many, especially in the northern parts of India, consider him as the tenth avatar of Lord Vishnu . Idols of Buddha are installed in many temples, where he is worshipped as Bhagwan Buddha. Besides Buddhists, others too in large numbers, visit important places connected with his life, like Bodh Gaya, Lumbini and Saranath, where he preached first, and offer prayers. Buddha Purnima, the day of his birth and enlightenment, is also observed with great piety all over the country and in many parts of the world.

Let us bow at the lotus feet of this great soul, imbibe his teachings and try to follow them, for our own betterment.