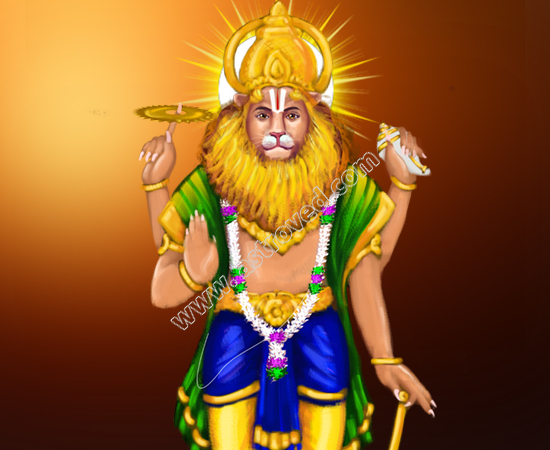 Lord Vishnu is the protector of the universe, and he takes on himself the responsibility of safeguarding the lives of people and ensuring their peaceful existence. For achieving this end, the Lord himself incarnates on earth from time to time, to annihilate evil, protect people from cruelties and to establish dharma, the ultimate righteousness. Narasimha is one such sacred incarnation or Avatar of the Lord and is regarded as his 4th incarnation on earth. Narasimha is a unique form, with a human physique and a lion head. This Avatar was believed to have been taken during the Krita (Satya) Yuga, also known as the Golden Age.

Lord Narasimha is the lion-man avatar of Lord Vishnu with a lion head and a human torso and lower body. He is usually depicted with a fierce look on his face with bulging eyes and four to sixteen hands carrying different weapons, which include mace, discus, conch, axe, etc. One free hand will always be in Abhaya mudra or blessing posture. Sometimes, he is also depicted seated calmly with his consort Goddess Lakshmi as Lakshmi Narasimha.

‘Nara’ is a human being and ‘Simha’ is a lion, and ‘Nara-Simha’ is thus a Man-Lion. Lord Vishnu had to take this unbelievably strange form, for outwitting a powerful demon known as Hiranyakashipu, who was well protected by a series of boons and for slaying him, to save the world and the people from his tyranny.

Bhagavata Purana gives a graphic account of the legend associated with Narasimha. Hiranyakashipu was a mighty Asura (demon). He developed a strong hostility towards Lord Vishnu, who had killed his brother earlier and put an end to his cruelties. Hiranyakashipu did intense penance towards Lord Brahma and obtained many exceptional boons from him, as per which he cannot be killed - by the Devas (celestial beings), the Asuras, the humans or the animals; by any weapon; either during the day or in the night; either on the ground or in space; and either inside any structure or outside. Armed with this seemingly invincible armor of near immortality, Hiranyakashipu let loose a reign of terror on all the worlds, dethroning the Devas, committing untold atrocities on sages, saints, and humans, and mercilessly punishing anyone who took the name of Vishnu or Narayana. Therefore, the world began resonating with the chants, ‘Om Hiranyaya Namaha.’ Unable to withstand the demon’s assaults, people surrendered to the Lord seeking his mercy and intervention. The omniscient Vishnu launched his grand mission of destroying the demon and saving the virtuous.

Hinranyakashipu was blessed with a son Prahlada, who turned out to be the most ardent devotee of Lord Vishnu. This pious young prince virtually lived and thrived on taking Lord Vishnu’s sacred name and singing his glory right in Hiranya’s palace, while the world outside bowed to the Asura’s diktats. Hiranya could not tolerate his own son defying him openly and taking the name of his sworn enemy with great reverence, and tried, by all means, to make the boy change his stance and fall in line. However, he failed in his attempts. Exasperated, he tried even to kill him by various means, but nothing worked against that divinely blessed youngster. Firmly believing that it is none other than his great adversary Vishnu, who is instigating and protecting the young boy, Hiranya asked his son where the Lord is and having been told by his devotee son that he is anywhere and everywhere, smashed his mace at a pillar in the palace with intense rage.

Lo and behold! The pillar split open, and out emerged the incredible figure of a man-lion, with eyes emitting fire. This manifestation grabbed the bewildered Hiranyakashipu with his hands, dragged him to the palace entrance, laid him on his lap, tore his body with his sharp nails and killed the ruthless demon, exactly in the evening time. Thus, this remarkable Narasimha Avatar of Lord Vishnu put an end to a deadly demon, who looked unassailable, without violating any of the amazing boons that he had obtained, and saved his devotee and also the world, from his unbearable atrocities.

Many of the devotees worship Lord Narasimha with great reverence at homes and in temples, while some observe fast until dusk, on the day of his advent. It is firmly believed that offering prayers to this Lord can bestow one with a variety of benefits like mitigating sins, curing diseases, warding off negative influences of planets and also evil forces, fulfillment of honest desires in respect of longevity, wealth, success, etc. and leading towards liberation.

Narasimha is said to have appeared at dusk on the Shukla Chaturdashi, the fourteenth lunar day of the bright fortnight of the Moon, in the month of Vaishaka (April-May), when Swati Nakshatra was ruling. This day is observed as Narasimha Jayanthi when people worship the mighty and compassionate Lord with fervor and devotion.

Narasimha, the 4th incarnation of Vishnu, is depicted in half-lion and half-human form.

Narasimha is an Avatar of Vishnu, who is responsible for the preservation of the universe.