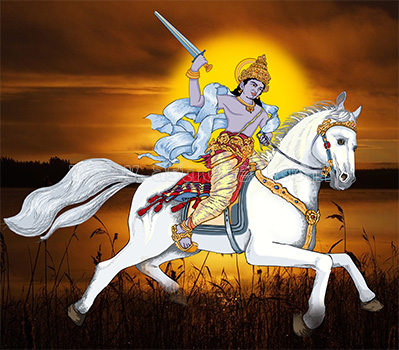 Kalki is a God, who is unique in every sense of the word. He is an Avatar, which is yet to be taken, or a phenomenon that is expected to happen. Kalki is going to be the last of the ten famous incarnations of Lord Vishnu, the God of protection and sustenance.

The word Kalki itself is a sort of an enigma, carrying various interpretations. The term Kalki might have come from the word Kala, which means time. This way, Kalki may mean the end of time or eternity or the ‘one who will end time.’ There is also a Sanskrit word Kalka, which means dirt or filth. And Kalki may be the ‘one who will destroy filth’ or the ‘Lord who will put an end to evil.’

We are living in the Kali Yuga when evil is expected to gain the upper hand over the good steadily. At some stage, the situation would deteriorate to such an extent that the world would be plagued almost entirely by unadulterated evil and the good might land at the brink of extinction. It is believed that Lord Vishnu would incarnate at that crucial point of time, to annihilate evil. With that, he shall virtually end time also. Kalki incarnation is thus expected to mark the end of the evil Kaliyuga, the current Kali Epoch, and usher in the virtuous Krita or Satya Yuga.

Lord Kalki is generally depicted as an aggressive warrior adorned in war attire, and galloping in a majestic white horse Devadatta, holding a blazing sword in his hand.

There are many ancient scriptures, which speak about the advent of archetype Kalki and the time of his incarnation. Vishnu Purana is considered to have referred to Kalki first. Kalki Purana and Srimad Bhagavata Purana make references to this incarnation and the event that are going to happen in future, while Buddhist holy texts also make predictions about Kalki. However, there are wide variations and lack of precision in many such details provided.

Parashurama is the 6th Avatar of Lord Vishnu, who is immortal. Some scriptures believe that this very aggressive warrior sage is eagerly awaiting Kalki’s arrival for teaching him military science, warfare and the skill for using weapons. They also believe that under the guidance of Parashurama, Kalki would do severe penance, obtain immense spiritual strength along with divine weapons, annihilate the perpetrators of crimes mercilessly, rid the world of evil, establish the rule of virtue, bring back the noble Satya Yuga and then return to his heavenly abode as Lord Vishnu .

While one ancient text indicates the time of Kalki’s arrival as ‘21 fortnights from the birth of Krishna’ and another as, ‘Margashirsha month, Krishna Ashtami, 8th day after full moon’, modern scholars have tried their own interpretations. Some calculations have also been made on the basis that the present Kali Yuga which is traditionally believed to last for 4,32,000 years, has begun only in 3102 BC and hence, either Kalki Avatar is far away in time, or a different interpretation needs to be given regarding this anticipated incarnation.

Idols of Kalki, as a horse-riding warrior and even as a horse-faced divinity, are worshipped in some temples, especially in those dedicated to the 10 Avatars of Lord Vishnu. However, the deity called Karuppaswamy is regarded by many as a representation of Kalki. Called Kalki Karuppaswamy, there are many temples for him, especially in villages. It is believed that his worship would be of great benefit in this Kali Yuga and that he shall remove delays, instill love and mutual affection, and cement relationships for a happy living.

There is a belief that the Lord would descend on earth as Kalki to wipe out evil on the day of Shukla Paksha Sashti of Shravan month (sixth lunar day of the Moon’s bright fortnight during July – August). Devotees observe that occasion as Kalki Jayanthi.