Mookambika is the universal mother Goddess, who is worshipped with great devotion especially in the southern parts of the country. She is regarded as an incarnation of Goddess Parvati and an aspect of Shakthi Devi , the divine feminine power.

Mookambika is depicted as a beautiful young woman, adorned with a crown in the head, well decorated with ornaments and garlands, and seated majestically on a throne or a lotus. She has four hands, two of which hold the conch and discus, while the other two are in Abhaya, the protecting and Varadha, the boon-giving postures. 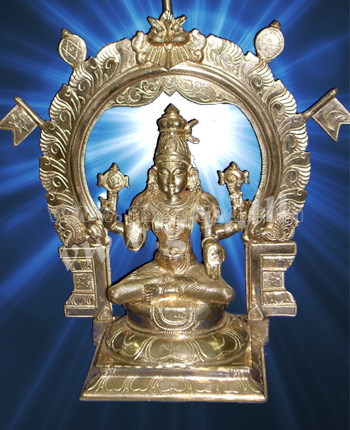 There are a couple of legends concerning Goddess Mookambika.

In ancient times, there lived a sage by name Kola Maharishi, who was meditating deeply and was doing a severe penance. However, there also lived a demon in the same region who was giving a lot of trouble to this sage. The demon was also trying to do intense penance in order to get many boons, so that he can become all the more powerful and rule over others. Knowing about the things going on, Goddess Parvati made the demon dumb, so that he cannot ask for any boons. This mute demon Mookasura became frustrated and started creating serious problems for the sage and also for the people around. The sage appealed to the Goddess for protection, and heeding his request, Parvathi descended in a powerful form, fought with Mookasura and killed him. The Goddess who put an end to Mookasura, came to be hailed as Mookambika. The grateful sage requested her to stay in that place itself and Mookambika took her abode in the same place, called as Kollur, after the sage Kola Maharishi.

Another legend gives a different reason for the advent of the Goddess. Once, there lived a mighty demon named Kaumasura. He committed many atrocities on people and subjected them to severe harassment. People prayed for relief to Parvathi Devi, who then incarnated as the powerful Goddess Mookambika, fought a fierce battle with the deadly demon and finally destroyed him. Thus, Mookambika brought back peace and joy in the lives of the people and they started worshipping her with devotion and faith.

As per another legend, Goddess Saraswathi was very pleased with the prayers of saint Adi Shankara and came with him down south, but en route, she stayed here as Mookambika.

While Mookambika is worshipped all over South, the most prominent temple for her exists at Kollur, Udupi district in Karnataka. People in large numbers visit Kollur Mookambika temple throughout the year and offer worship to the Goddess. Performing the Vidhyarambam ritual is highly popular here, when children are initiated into education, for the first time in life.

Lord Mookambika is the chief deity of this powerful Pooja. She is considered the ‘Goddess of Luck’ and she blesses her devotees with smooth success in all their endeavors