About The deity: Gaja Lakshmi

Goddess Lakshmi, the consort of Lord Vishnu assumed several forms to satisfy the necessities of humanity. Each Avatar symbolizes some kind of wealth and her manifestation as Gaja Lakshmi is revered as the giver of Animal Wealth. Goddess Gaja Lakshmi is of deep relevance to those who earn their living and food by rearing cattle. In the form of ‘Gaja’ which means elephants, the Goddess signifies royalty and power. Since Gaja Lakshmi Devi provides both abundance and prosperity, many place an image of her in their houses.

Gaja Lakshmi Devi is depicted with four arms and does not wield weapons of any sort. She is seated on a Lotus in Padmasana yogic posture, flanked by a male and female white elephant on either side, with water continuously cascading from their trunks and performing Abhishekam to the Goddess. Two arms are portrayed holding lotuses, while the other two are in the Abhaya Mudra and Varada Mudra. This form dispels the fear of those who own livestock and protects them from losing their livelihood.

Goddess Lakshmi is revered as the Mother of all creation from whom all living beings are conceived. She assumes various forms, with each fulfilling a specific purpose for the benefit of humanity. Her Avatar as Gaja Lakshmi satisfies the needs of those who are dependent on rearing livestock to make ends meet. 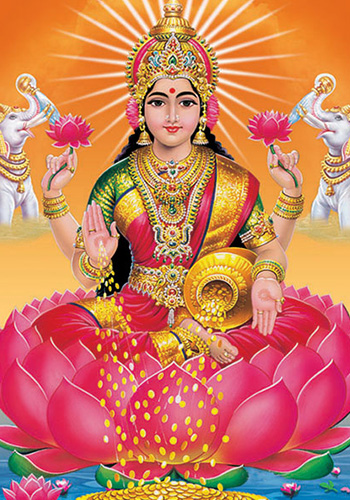 Gajendra, the elephant and Goddess Lakshmi were always engrossed in offering prayers to Lord Vishnu together. Because of his girth, the elephant was a little slow and could not perform the Ceremonies as fast as Lakshmi. Lord Vishnu then requested Lakshmi to join him so that Gajendra could offer prayers to both of them together. The Goddess then assumed the form of ‘Gaja Lakshmi’ and received the offerings of the elephant.

Goddess Lakshmi in any form or Avatar is easily appeased but fickle, so she keeps flitting from one house to the other. She remains with those who maintain cleanliness and pray to her with a sincere heart. Offering flowers and lighting lamps to illuminate the premises ensures she is always present in the house.

Praying to Goddess Gaja Lakshmi with deep sincerity is said to dispel darkness and eradicate all afflictions. She grants the wishes of her devotees and helps them overcome adversities in their pursuit of a peaceful and prosperous life. Chanting the Gaja Lakshmi Stotram is believed to please the Goddess immensely and said to evoke an immediate response from her. 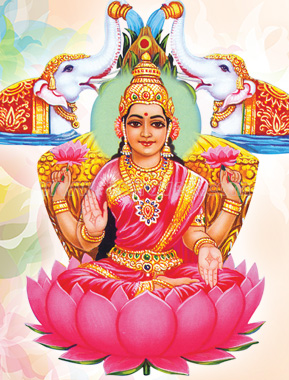