The Yaganti Temple lies in Kurnool district of Andhra Pradesh. The temple is also known as the Sri Yaganti Uma Maheshwari Temple and is dedicated to Shiva. The temple has been built according to Vaishnavite tradition. The temple houses the combined idol of Shiva and Goddess Parvati -Ardhanareeshwara. 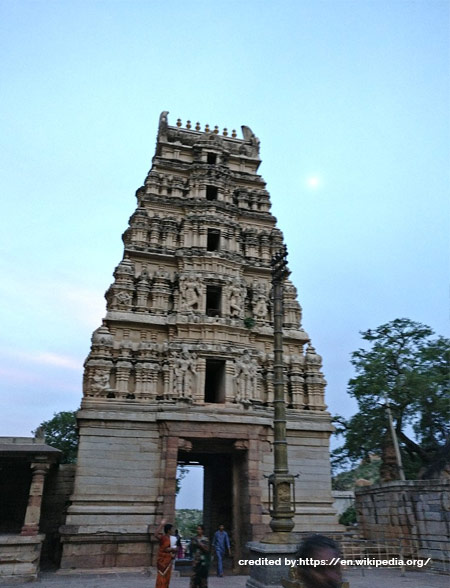 Legend has it that Sage Agastya wanted to build a temple for Venkateshwara here. The idol, however, could not be installed as the toenail of the idol was broken. This greatly upset Sage Agastya who performed penance. Shiva appeared and told the sage that the site was better suited for a Shaivite temple as the region resembled Kailasa. Sage Agastya then requested Shiva to grant an idol of Goddess Parvati as Sri Uma Maheshwara in a single piece of stone. Shiva agreed and gifted him the idol accordingly.

According to another legend, a devotee of Shiva called Chitteppa was offering worship to the God when he appeared as a tiger before him. The devotee was quick to realize that the tiger was none other than Shiva himself and shouted that he had seen Shiva and danced with great joy. There is a cave called Chitteppa near the temple.

The Yaganti Temple is one of the most famous temples for Shiva in Andhra Pradesh. The temple is believed to date back to the 5th and 6th centuries with the contributions coming from the Pallava kings, Chola kings, Chalukya dynasty and the Vijayanagara rulers. Significant contributions towards the temple were made by the king of Vijayanagara, Harihara Bukka Rayalu of the Sangam dynasty, who ensured the completion of several structures in and around the temple.

It is believed that the saint Sri Veera Brahmendra Swami stayed at this site for some time and wrote the Kalagnanam.

The main deities in the temple are that of Shiva, Goddess Parvati, and Nandi. The temple lies amidst lush greenery of the Yerramala hills that are of immense beauty and have a lot of natural caves.

Devotees believe that the size of the Nandi (bull) in front of the temple is growing continuously. Locals are of the belief that the Nandi initially was much smaller in size. According to them, an experimentation was carried out on the idol and the composition of the rock from which the idol was built is such, that it has a tendency to enlarge by nature, on its own. Devotees do Pradakshinas around the temple as per tradition. Temple staff are believed to have removed one pillar as the Nandi had become bigger. The saint Sri Veera Brahmendra Swami believes that the Basavanna (stone Nandi) of the temple would come alive and shout at the end of Kali Yuga.

The temple has caves in and around its premises. Devotees can visit the Agastya Cave that has 120 steps leading up to it. It is believed that this is the cave where Sage Agastya performed penance for Shiva. The cave houses an idol of Devi that is worshipped.

The Venkateswara Cave has the damaged idol of Sri Venkateswara. The steps to this cave are steep. It is believed that this idol existed before the Tirumala Tirupati Temple. As the foot of the idol was damaged, it could not be worshipped. According to the saint Sri Veera Brahmendra Swami, this cave could be an alternative to the Tirupati Temple.

The Veera Brahmam Cave is where the saint Sri Veera Brahmendra Swami wrote some of his Kala Gnanam.

The temple has a small Pushkarni (pond) on the premises. The water is believed to flow into this pond from the bottom of the hill through the mouth of Nandi. No one knows how the pond is supplied with water all year around and this is highlighted by the skills of the ancient Vishwakarma Sthapathis.

The Pushkarni on the temple premises has water flowing into it all year through. A holy bath in the temple pond is highly beneficial to the devotees. It is believed that Sage Agastya bathed in the Pushkarni before offering prayers to Shiva.

It is believed that while Sage Agastya was performing penance, the crows disturbed him by their cawing. He cursed the crows that they could not enter the place. The crow is the vahana for Shani Deva. As a result of the curse, Shani Deva cannot enter the temple.

The temple celebrates Maha Shivratri and many devotees visit the temple during this time.

How to Reach Yaganti Temple

The Hyderabad International Airport is the closest to the temple, 290 kilometers from Yaganti.

The Nandyal Railway Station is the closest at a distance of 55 kilometers from the temple.

The Yaganti Bus Stand is the closest to the temple.