Varadaraja Perumal Temple is one of the celebrated places of worship of Lord Vishnu. Hailed also as including Thirukkachi and Hastigiri in many scriptures and literary works, it remains a Divyadesam that the Azhwar saints have sung about, in their sacred hymns. This is also one of the 3 most sacred Vishnu shrines and is referred to in the Vaishnava parlance as 'Perumal Koil,' with the other 2 being Srirangam known as 'Koil,' and Tirupathi, as 'Tirumalai.' This temple is located in the ancient and historical temple-town of Kanchipuram in Tamil Nadu. The part of the town where this temple is situated itself is known as Vishnu Kanchi, in view of the presence of this temple and some others, dedicated to Vishnu. The presiding deity Lord Varadaraja Perumal, also called Devaraja Swamy, is housed on a hillock called Hastigiri or Aththigiri, in the temple. Goddess Perundevi Thayaar is his consort. Many saints, Acharyas, the preceptors, and Vaishnava scholars have lived in this place or worshipped in this temple. The temple is also known for 'Athi Varadar,' a unique statue of Varadaraja made of a special Athi wood, that is, fig tree, that is maintained inside the temple pond, and brought out for public darshan, once in 40 years. 'Kanchipuram Idli,' the special snack offered to the Lord here, is quite famous. 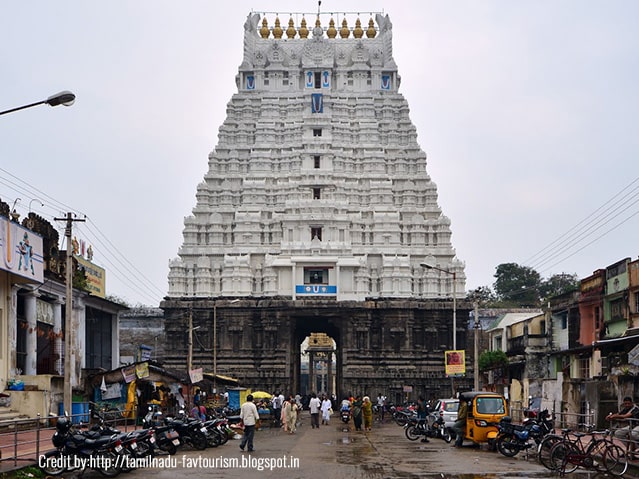 There are a few mythological stories about this temple, most of them involving Goddess Saraswati. Indra, the king of the celestials, was once cursed by Saraswati to become an elephant, but he was relieved of his curse by Vishnu's grace, here. Hastigiri means the elephant-hill, and Indra is said to remain as the Hastigiri hillock on top of which, the Lord is enshrined. As per another story, Brahma performed a sacrifice here, but his consort Saraswati, who had some misunderstanding with him, came in the form of a flooding Vegavati river to wash away the Yagya. But Vishnu laid himself on the path, halted the floods, and ensured the successful completion of the sacrifice. This Vegavati of the legends is said to be the Palar river, of the present times. He is also said to have emerged as Devaraja Swamy with the brilliance of innumerable Suns from the sacrificial fire and stayed here. As he came out of the fire, the face of the processional deity bears many scars on it. It is also said that 2 of sage Gautama's disciples incurred a curse and turned into lizards. They worshipped the Lord of this temple and were relieved of their afflictions. 2 lizards can still be found in the temple roof as if to bear testimony to this legend.

The history and Architecture of Varadaraja Perumal Temple, Kanchipuram

Plenty of inscriptions are found in this temple to show that several ruling dynasties of the southern part of the country, like the Cholas, Pandyas, Cheras, Kakatyas, Hoysalas, and Vijayanagara Kings have contributed to the temple in many ways. However, its renovation and expansion took place mainly during the Chola reign.

Spread across an area of 23 acres, this vast temple is as much known for its religious significance as for its architectural and sculptural greatness. The temple contains 3 main precincts, 32 shrines, nearly 20 Vimanas, and hundreds of pillared halls. Lord Varadaraja can be worshipped in the main shrine on top of the Hastigiri hillock, in a standing posture. His 10 feet tall majestic idol is so designed that the Sun rays fall on it on the 15th day after the Chitra Pournami, the Full Moon day of the Chittirai month. Perundevi Thayar, his consort, is housed separately at the ground level. There is also a Lord Narasimha shrine at the base of the hillock. Rajagopuram, the main tower above the western entrance is 7-storied, while the Eastern tower is much taller. A massive granite compound wall runs around the temple complex. While there are Vijayanagar period murals around the sanctum, beautiful granite sculptures and carvings are found in many of the mandapams. Kalyana Mandapam, the 100-pillared hall, is of particular significance in this regard. Considered a masterpiece of Vijayanagara architecture, it contains many eye-catching sculptures, including those from epics like Ramayana, Mahabharatha, and Bhagavatha. The exquisite stone chain sculpted from a single rock hanging from the corners of the roof of the hall is found swaying gently in the wind, and that very sight is breathtaking! Anantha Saras, the temple tank, is inside the complex, and Lord Athi Varadar is lying in its waters. There are also shrines for many other divinities and saints here, and these include Chakratazhwar, the Chakra of the Lord, Azhwars saints, and saint Ramanuja.

The annual Brahmotsavam celebrated during Vaikasi (May-June) can be called the biggest festival of this temple. The festival deity is carried on various mounts in grand processions daily, in the mornings and evenings. Of these, the Garuda Sevai, the Lord riding the Garuda mount, is of particular significance, drawing thousands of enthusiastic devotees. 'Athi Varadar,' the wooden image of the Lord coming out of the temple tank once in 40 years, remains a big celebration, too.

The term 'Varada Raja' literally means 'the king of boons.' Thus the Lord remains a great benefactor. It is believed he can bestow educational excellence, prosperity, and family welfare on the devotees. It is also a belief that praying to Sudarshana Azhwar, the mighty discus weapon of the Lord, can remove obstacles in marriage, ensure victory in court cases, and give mental peace. People also pray to Perundevi Thayar for progeny blessing and cure of illnesses.

The nearest airport is Chennai, about 80 Km from the temple.

Kanchipuram itself has a railway station and is connected with many important cities and towns.

The Kanchipuram town is very well connected by road with cities like Chennai and Bengaluru and other places.