The Vadivudai Amman temple lies in northern Chennai in Tiruvottiyur. It is also called the Thyagaraja Temple and is dedicated to Shiva. The presiding deity is in the form of Swayambhu (self-manifested) Shiva Lingam called Sri Aadhi Pureeswarar. The Goddess is Vadivudai Amman, a very powerful Goddess in the form of Gnana Shakthi (wisdom and knowledge).

The temple has been praised in Tevaram hymns by the Saiva nayanars (7th-century Tamil poets) and has been categorized as a Paadal Petra Sthalam. There are 276 Shaivite temples or Punyasthalas selected as Paadal Petra Sthalams based on their antiquity, the rich culture, and reverence attached to the temple.

All three Thevaram Moovars (Appar, Samandar, and Sundarar) have rendered Thevaram songs in the temple. This is one among the 44 Paadal Petra Sthalams, where all the Moovars have rendered their Pathigams. The temple is one of the 51 Shakti Peetams in the country.

Great poets and scholars have eulogized the temple, affirming the splendor of India's rich tradition and spirituality. The temple is managed by the Hindu Religious and Endowment Board of the Government of Tamil Nadu. 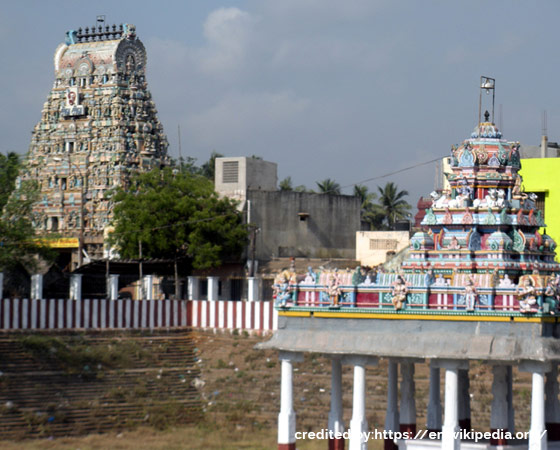 According to legend, Shiva had blessed Brahma with the creation of the world at the time of Pralaya (destruction) and made way for the Pralaya floodwater to recede. The place was known as Thiru Otriyur (Votra or Vatra in Tamil means receding water). Shiva took the form of a huge fire to make the water recede, and he stayed as a Swayambhu Lingam under a Makizha tree. This is said to be the Aadhi (first) Swayambhu Shiva Lingam ever to appear after the Pralaya, hence God is called Sri Aadhi Pureeswarar.

According to another legend, Brahma, one among the three main Gods in Hinduism, created the Devas and Asuras. While the Asuras used muscle power, the Devas fought with the help of the Vedas. Once two Asuras - Madhu and Kaitabha managed to steal the Vedas and kept them at the bottom of the ocean. The Devas approached Vishnu, the Supreme Protector, for help, but he did not have the power to defeat them alone. He prayed to Shiva and Goddess Parvati, and with their support, he defeated the Asuras. Vishnu took the avatar of Matsya (Fish) and went to the bottom of the ocean and retrieved the Vedas. The sacred texts were brought to this temple, where they were assembled and purified.

Another legend is about the King of Serpents, Vasuki, who, after receiving Shiva Deekshai from Sage Upamanyu, performed penance and worshipped Shiva here. Impressed by his penance, Shiva appeared from the anthill, blessed Vasuki, and wore him as an ornament around his neck. Shiva is called Otreeswarar or Padampakkanathar.

Tiruvottiyur is home to the famous and legendary Carnatic composer and poet Thyagayyar. Several famous saints prayed at the temple, including Pattinathar and Ramalinga Swamigal. Several inscriptions in the temple indicate that the temple was a center for learning, and several religious discourses were held here.

Opposite to the main shrine is the Nataraja shrine. In the kostha is the Ganapati shrine. The Ganapati here is called Gunalaya Ganapati (abode of bliss), and as one circumambulates the shrine, one can see the shrine of Adi Shankara.

The temple houses the deity of Subramanya. Dakshinamurthy is in the northern kostha facing the south, and in the sub-complex of the shrine is Goddess Kali. There are two shrines for Goddess Parvati – one is for Goddess Vadivudai Amman, and the other is for Goddess Vattaparai Amman.

The Goddess is Vadivudai Amman, a very powerful Goddess, also called Tripurasundari. She is housed in a separate shrine. There is a shrine for Goddess Durga in the northern side of the temple.

The temple has two Sthala Vrikshams - the Athi and Makizham.

Abishekam is performed to the Avudayar (base) and not the main deity. On the Full Moon day in the month of Karthigai, the armor for the Lingam is removed, and God is anointed with punugu, jawadhu, and sambirani oil. Devotees can see and worship the Lingam as the anthill itself, for three days without cover. The deity is covered for the rest of the year. It is believed that Vishnu, Brahma, and Vasuki worship Shiva on these three days.

An interesting aspect is that the main deities are in duplets - two presiding deities of Sri Aadi Pureeswarar and Sri Otreeswarar. There are two Goddesses – Vadivudai Amman and Vattaparai Amman. The temple has two sacred trees, Athi and Makizham, two Theerthams - Brahma and Nandi Theerthams. The temple has two pooja procedures - Karana and Kameeka.

The temple is one among seven in Thondai Nadu, where Thyagaraja can be seen. His dance form is called Ananda Thandavam. The Tri-Shakthi temples of Itcha, Kriya, and Gnana Shaktis are very popular.

It is also believed that the 27|Nakshatras (stars) worshipped Shiva in this temple seeking cleansing and chose to stay here as 27 Shiva Lingams. It is believed that Kavi Chakravarthi Kambar translated Valmiki's Ramayana from Sanskrit to Tamil in this temple.

Many poets and sages, including Arunagirinathar, Kambar, Muthuswamy Dikshithar, Ramalinga Swamigal, and Maraimalai Adigal, have worshipped Shiva here. Saint Thyagaraja Swamigal was an ardent devotee of Sri Rama and a Carnatic composer. He visited this temple and was so awestruck by the beauty of Goddess Parvathi that he composed the Tiruvottiyur Pancharatna (five gems) in praise of Goddess Tripurasundari.

Anyone entering this temple will be cured of their illness. Devotees come to the temple seeking boons for marriage and the welfare of their children. People seeking blessings for children come to this temple and offer prayers to Sri Kuzhanthai Eswarar. Devotees facing adverse effects of any Nakshatram come here and perform poojas.

The temple observes important events during the 10-day Brahmotsavam festival in the Tamil month of Masi (February-March). Every year, a 15-day festival is celebrated in honor of Durga Devi. On the last day, the thatched roof is burnt to symbolize Kannagi burning Madurai, as Goddess Durga is associated with Kannagi, the protagonist of Silappadikaram. On the tenth day, Sri Thyagaraja's 18 types of dances are celebrated grandly.

How to Reach Vadivudai Amman Temple

The nearest airport is the Chennai International Airport, located 7 kilometers away.

The nearest railway station is the Tiruvottiyur Railway Station located 1 kilometer one away.

Therady bus stop is located close to the temple and is 2 kilometers away from Tiruvottiyur bus terminus.