Sri Mahalinga Swamy Temple is located in the town of Thiruvidaimaruthur, near Kumbakonam. It is dedicated to Lord Mahalinga Swamy and his consort Sri Brihatasundaragujambigai. This is one of the “Panchalinga Kshetram”, as there are five Lingams of Lord Shiva in the same temple campus. They are placed in the four different cardinal directions, and the fifth one is located in the center of the shrine. The other shrines inside this temple complex are Viswanathar in east street, Rishipuriswarar in the west, Atmanathar in South street and Chokkanathar in North street. This is also a Padal Petra Stalam, where saints Appar and Sundarar sang about this temple in theirThevaram hymns. This is the birthplace of Saint Pattinathar. 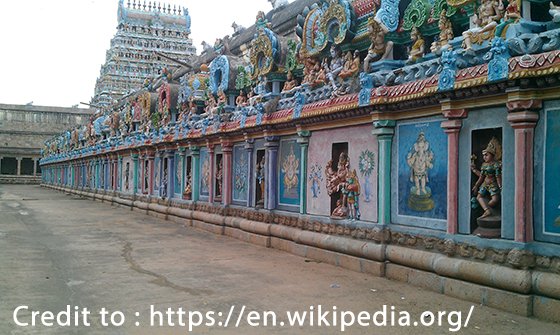 The temple of Sri Mahalinga Swamy is considered on par with Varanasi, as a holy shrine.The legend of this temple connects back to a period when King Varaguna Pandiya’s horse accidentally killed a Brahmin. The curse of killing a Brahmin is called Brahmahatya Dosha and is considered as one of the heinous crimes. To escape from the wrath of the curse, the king took shelter in Lord Mahalinga Swamy temple. The king entered through the first entrance, and once he completed his prayer towards the lord, he left through the reverse entrance. The Brahmahatya Dosha, which was waiting to catch the king was still in the first entrance, without knowing that the king had escaped through the rear entrance. Thus the king got relieved from the wrath of Brahmahatya Dosha.

The temple has five tiered rajagopuram and has three Praharams or the ambulatory paths. There are five temple tanks namely Karunyamirdha Theertham, Soma Theertham, Kanaga Theertham, Kalyana Theertham, and Iravatha Theertham. Replica of Mount Meru is installed in this temple. This is one of the shrines of Lord Shiva which has Arjuna tree (Maruda Maram in Tamil), as the Sthala Vriksham, the holy tree. The shrine of Goddess Mookambika is very similar to the shrine of the Kollur Mookambika temple. There is a sculpture of 'Chola Brahma Hathi,' a demon in one of the temple towers on the eastern side.

The temple car festival is one of the prominent festivals of this temple. This is one of the biggest temple cars of Tamil Nadu, which measures 89 feet. Thai Poosam is celebrated in the Tamil month of Thai for ten days, which corresponds to January according to the Gregorian calendar. Theerthavari festival is celebrated on the last day of Thaipoosam. During the Tamil month of Vaikasi, the festivals like Thirukalyanam which is referred to as celestial wedding, and Ambal Tapas which refers to the period in which the Goddess performed austerities towards the Lord is prominent. Other than this, the temple celebrates Diwali, Pongal, Karthigai Deepam, Navaratri, and Shivaratri.

It is believed that ambulating Ashwamedha Prakaram is equal to conducting Aswametha Yagam. When ambulatingPranavaPrakaram, a devotee can get salvation. It is said that people having mental disorders are cured by ambulating the temple corridors.

How to reach Sri Magudeswarar Temple

Trichy airport is 113 kilometers from the temple.

The nearest railway station is in the town of Kumbakonam.

The bus stop is very near to the shrine. State transport, along with private buses gives good connectivity. Other than buses, autos, cabs and private taxis provide excellent connectivity and are available round the clock.