Sri Kalyanasundareswarar Swamy Temple or Thirumanancheri is located in the Mayiladuthurai district. The word 'Thirumanam' in Tamil refers to the word marriage, and Cheri denotes a village. It is one among the It is one of the shrines of the “Paadal Petra Sthalams”, which are sacred spots glorified by Tamil Saints called Nayanmars. The Nayanmars are ardent devotees of Lord Shiva. Sage Tirugnanasambandar and Tirunavukkarasar are associated with this temple and have composed several poems about this shrine in their Thevaram, a sacred composition of poems. Lord Shiva is in the form of Lord Dakshinamurthy, who performs severe austerities. Since Lord Shiva and Goddess Parvati got married in this shrine, it is believed to a sacred place for all the people who are looking for a life partners. 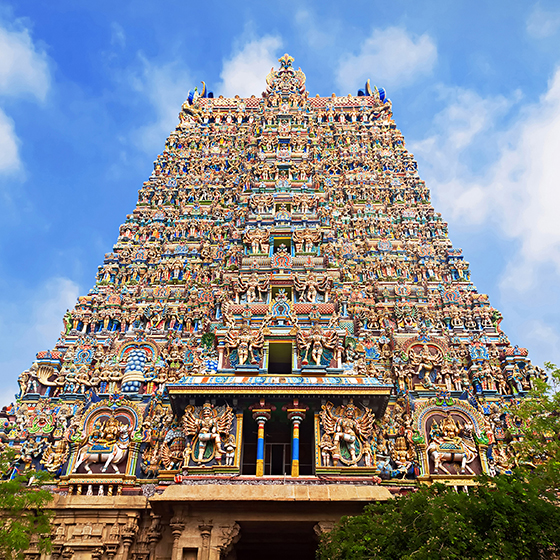 Once Goddess Parvati expressed her desire to Lord Shiva get married on earth. While playing a dice game, both had heated arguments, and finally, Goddess Parvati descended to earth and had taken the form of a cow. Since Lord Vishnu is her sibling, he took the form of a cowherd and protected his sister. While Sage Bharatha was performing severe austerities, she got her curse relieved at “Thiruvaduthurai”, and she gained her original form in the sacred town of Kuthaalam. She took bath in the River Cauvery and continued to live with Sage Bharatha, as his daughter. Sage Bharatha later requested Lord Shiva to get his daughter married. Thus it is in this shrine, the wedding between Shiva and Parvati took place.

There is another legend connected with this shrine. Manmadhan, the archetype of love, to instill the love in the heart of Lord Shiva, threw his arrow while Lord Shiva was meditating. Raged, as his meditation got disturbed, Shiva burnt Manmadhan to ashes. When the consort of Manmadhan, Sati came to know about it, she pleaded Lord Shiva to bring her husband back to life. Lord Shiva accepted her wish and brought Manmadhan back to life in this shrine.

This temple is built by Queen Sembiyanmadevi, a Chola Queen. The temple is predominantly in Chola style architecture and was later patronized by Nayaka Kings. The temple is built in granite stone. Lord Shiva, the bridegroom as Sri Kalyanasundarar, along with consort Goddess Parvati, the bride as Gokilambal, appears in the sanctum sanctorum in their marriage pose. There are other shrines for Lord Ganesha and Lord Muruga. The shrine has temple halls and corridors, which are supported by pillars. There are minute carvings, inscriptions and stucco images.

This temple is worshiped by people who are looking for their perfect life partners. As the Lord along with his consort appears in the wedding pose, it is highly auspicious to find the life partner. Since Manmadhan was resurrected, this shrine is worshiped by ladies for bestowing long life to their husbands. Couple looking for the boon of progeny would also make their special requests. Once their requests are granted, the couples would come back to pay their tributes.

The nearest airport is in Trichy, which is both a National and an International airport.

The bus stop is very near to the shrine. State transport, along with private has buses that give good connectivity. Other than buses, autos, cabs and private taxis provide excellent connectivity and are available round the clock.