This 500-year-old temple lies in the Thennangur village in Thiruvannamalai district of Kanchipuram. Both southern and northern traditions are followed in the temple. The main deity of the temple is Vishnu as Panduranga, along with his consort Ragumayee. This town is also the birthplace of Goddess Meenakshi. 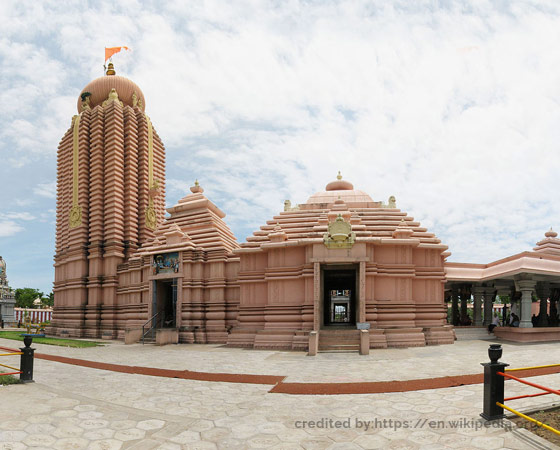 One of the main propagators of the Namasankeerthanam tradition was Swami Haridas Giri, affectionately known as Guruji to all. He toured widely to spread the teachings of his mentor, Swami Gnanananda Giri. Guruji stressed the need for a permanent establishment to propagate Namasankeerthanam. At the command of his spiritual leader, he chose Thennangur village, then known as Dakshina Halasyam, to spread the knowledge through Namasankeerthanam, and impart knowledge on ancient Vedic texts and scriptures. He established the temple combining the architectural styles of north and south.

Thennangur derived its name from Dakshina Halasyam, which means the place where the wise drink nectar. The area was known as Shadaranya Kshetra, as six forests covered it. A Pandya king desiring a child is believed to have performed a Yagna here with the help of the Sapta Rishis. A girl child arose from the Yagna. The King named the child Sri Meenakshi. Dakshina Halasyam is believed to be the birthplace of Goddess Meenakshi. As explained by Kanchi Paramacharya, a temple was also built in Thennangur for Goddess Meenakshi and Sri Sundareswarar.

This unique looking temple was based on the Puri Jagannath Temple of Odisha, but its Gopurams at the entrance follow the Pallavan style of architecture. The temple structure resembles that of the Pandaripuram temple in Maharashtra too.

The temple features a 120- feet high tower (Vimanam) that has a nine and a half feet gold Kalasam with the Sudarshana Chakra and a saffron flag flying above the tower. After the Balipeeta, there is a sixteen-pillared Maha Mandapam.

The main idol of Sri Panduranga (12 feet) and Mother Ragumayee (8.5 feet) is made of Salagrama stone and was installed by Swami Haridas Giri, which he had brought from Pandharpur 500 years ago. The temple also houses a rare idol of Achyutaraja Perumal, which is not found anywhere else in India.

The idols are beautifully clothed and decorated with beautiful jewelry. This creates an aura of royalty, and many devotees are mesmerized by this spectacle. The presence of the Divine and the vibrations from the deities are said to be powerful here.

Another unique feature is the beautiful murals present on the walls of the temple, which is the first of its kind in India. The temple houses all deities related to the Sri Chakra form of worship.

Deities related to Sri Chakra are present in the temple, which include the idols of Maha Shodashi, Rajarajeshwari, Saraswathi, Lakshmi, Brahma, Vishnu, Rudra, Easwara, Vinayaka, Bala, Annapoorani, Ashwaruda, and Rajamadhangi.

The temple houses a Namasankeerthanam Hall with all the Bhagavatha saints beautifully decorated.

The Thamala tree is the Sthala Vriksham of the temple, under which it is believed God played the flute that drew Radha to him.

The temple is administered by His Holiness Namanandagiri Swamigal.

The temple follows a unique combination of northern and southern styles of architecture. In terms of tradition, the temple follows the orthodox Sampradaya of the south and the Bhajan Sampradaya of the north. According to temple lore, the main deities bestow blessings on newlywed couples, and hence the Maha Mandap inside the temple complex is chosen as the wedding venue by numerous families. It is also believed that Sri Panduranga frequents the temple in different forms on special occasions.

Sri Panduranga bestows blessings on devotees as King of Mathura on Sundays, and he appears in a simple form displaying the lotus feet for darshan (divine vision) on Thursdays. On Fridays, he is encased in silver, and he appears as Sri Venkatachalapathi on Saturdays.

This is the Vedic New year, and the spring festival is celebrated in April. It denotes rejuvenation and the beginning of a new harvest year. Devotees perform hydration ceremonies (Abishekam) and poojas (Archana).

The festival of Muthangi Sevai is celebrated on the day of Krishna Jayanthi in the month of August. The deities are beautifully adorned in fine jewelry, and Lord Panduranga is shown as Krishna holding the Govardhan Hill, and as Parthasarathy and Rajagopalan.

Devotees pray for a good alliance for marriage, for a blissful married life, and a boon for progeny.

How to Reach Thennangur Panduranga Temple

Nearest Airport is Chennai International, at a distance of about 110 kilometers from the temple.

Nearest Railway Station is Villupuram which is 70 kilometers away from the temple.

Thennangur is located on State Highway 116, which lies between Kanchipuram and Vandavasi. Thennangur is connected by buses from Villupuram, Vandavasi, Thiruvannamalai, Kanchipuram, Chengalpattu, and Chennai.