Rockfort Temple or Ucchi Pillayar Kovil is one of the prominent temples of Trichy. It is one of the important temples of Saiva Sect and revered by a lot of saints of the Tamil sect, known as Nayanmars called “Padal Petra Stalam”.Geologically the rock which is 83 meters high, is said to be over one billion years ago. This temple is divided into three layers, of which Lord Ganesha is in the ground level, and after climbing almost 200 steps, it reaches to the shrines of Lord Shiva and Goddess Parvati.

It is believed that Lord Ganesha stays on top of the mountain, and guards the people, and protects them. After that, climbing a hundred more steps reaches a beautiful clock tower, and further, the sanctum of Lord Ganesha.  Situated in the banks of Cauvery, it stands tall and marks the symbol of tradition and heightened spirituality of the people. It attracts people from all over the world, as the small hillock is magnificent in terms of its mystical and architectural excellence.

History and Legend of Rockfort Temple: 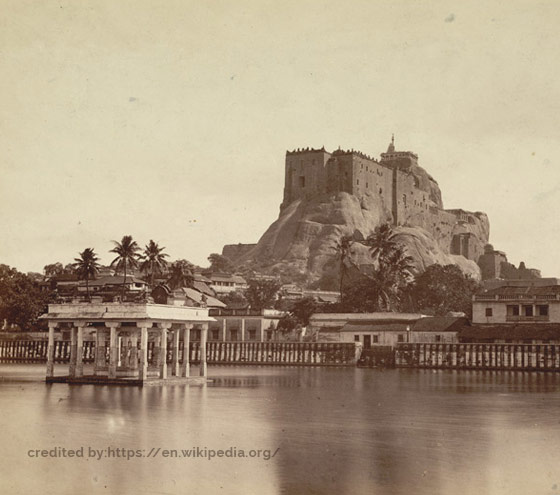 Legend of Thiruchirappalli has a long way to go. It was once a land of great saints and sages, who wandered in the dense forest. It is also believed that a portion of Ramayana had occurred, where it binds Trichy, Lord Ganesha, Lord Rama from the Vedic times. After the war and exile were over,  Lord Rama gifted a statue of Lord Vishnu to King Vibeshana, brother of King Ravana. Since Sage Agastya , did not want the statue to be taken from India, he requested Lord Ganesha to help. In the disguise of a small boy, he tricked Lord Vibishana to keep the Idol at Srirangam, which became affixed to the ground. Then all the way from Srirangam, Lord Ganesha was chased to the top of the small hill. After revealing his true identity, Lord Ganesha blessed King Vibeshana abundantly. Lord Ganesha also resides on top of the hill and blesses everyone who comes to visit him.

The Rock Fort temple is the Landmark of Trichy. It stands 83m tall hovering on the rock. This is also one of the oldest rock-cut temples, where the temple work was initiated by Pallava kings, but it was the Nayak Rulers of Madurai who had tremendously made effort and patronized a lot of temples in South India. Rock fort temple was also enhanced during the Vijayanagara empire. There is a separate shrine for Lord Shiva, known as Thayumanavar and a separate shrine for Goddess Parvathy. This temple is known for intricate art, and carvings on the rock, where the stone chain, carved out of the monolithic stone, is highly iconic. This temple also houses shrines for “Navagraha”, “Lord Jurahareshwarar”, and Lord Bhairava”.

Ganesha Chaturthi is one of the important festivals of this temple. A big “Kolukattai”, a sweet offering of 100kg is brought and offered to the Lord. This well-endowed temple celebrates. The annual Brahmotsavam takes place in the Tamil month of Chithirai. Aadi Pooram and Panguni float festivals are also of great significance here. 15 days Chithirai car festival, and Summer festival during Vaikasi Is highly celebrated. Navratri is prominently celebrated in the months of Purattasi. The  Skanda Sashti festival in Aipasi also takes enormous significance. Along with that, festivals like Deepavali , Pongal days are elaborately celebrated.

Lord Ganesha is the most widely worshipped God in the Hindu Pantheon. Lord Ganesha removes the obstacles from the journey of life. He is also known as Ganpati, Vigneshwara, Vignaraja. He is worshipped at the beginning of any kind of task. He eliminates all the hurdles that may come along the way during the accomplishment of a task. Lord Ganesha resides on a summit and believed to watch the entire city, and care for all the devotees who submit themselves to him. Worshipping the Ganesha here would certainly bring peace mainly because of the location of the temple. Pregnant ladies will pray to Lord Shiva to have a safe delivery.

How to reach Rockfort Temple:

Trichy has an international airport which is just ten kilometers away from the temple. Enormous local transports are available from the airport to the temple.

The Trichy city is well connected from various parts of Chennai, Tamilnadu. It has its own railway station, very much nearer to the temple.

There is a bus stop very near to the temple. Apart from buses, there are a lot of local transports like autos, taxis which can take very closer to the temple.